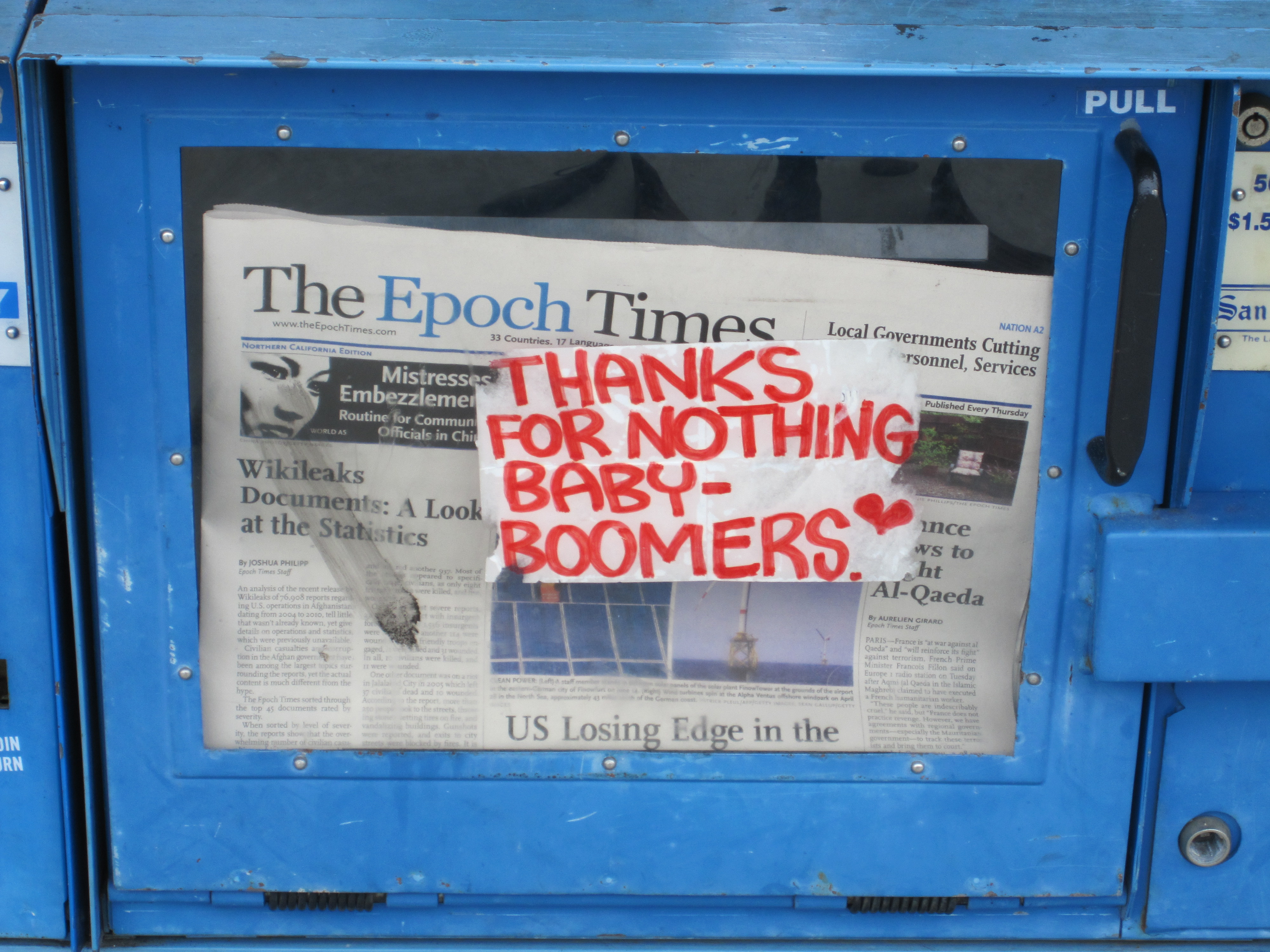 Thanks for nothing CPUC

The New York Times reported last week that (after months of increasingly desperate attempts to make them realize that they are endangering public health) the California Public Utilities Commission is finally considering allowing people to opt out of being forced to have a wireless ‘smart’ meter on their home.  Even if it means they have to take out a second mortgage on their home so that their kid’s headache will go away.  Thanks for nothing CPUC.
The paper reported:

In separate interviews, California Public Utilities Commission members Nancy Ryan and Timothy Simon said they were open to looking at new policies that would either let ratepayers reject smart meter installation outright or pursue wired rather than wireless connections.

Their comments came in reaction to public pressure from a small but vocal group of residents and lawmakers in Marin County who fear the meters might be dangerous because of the electromagnetic waves they emit. Though the science on the question appears to indicate no health threat, the Marin County Board of Supervisors passed an ordinance last week that deems the installation of smart meters a misdemeanor.

Where to begin?  First out of the blue, we get the ‘science on the question appears to indicate no health threat.’ According to whom exactly?  Did the journalists review the science themselves?  Did they speak to anyone suffering from the effects of a new ‘smart’ meter on their home?  Or did they accept the unscientific conclusions of a group of smart grid and industry insiders with no health background that appeared in the recent CCST report?    Real scientists like Henry Lai at the University of Washington (who in 1996 published peer-reviewed evidence that low levels of wireless radiation break down your genetic material) may very well disagree with that assessment.  Perhaps that’s why in the same year that Lai’s research was published over the loud protests of the wireless industry, the Federal Telecommunications Act specifically prohibited local governments from rejecting cell towers based on health impacts.   Sometimes science has a pesky way of interfering with all that corporate profit.  Thank god we have the feds to sort it all out for us.

Then out of nowhere we get this claim that the number of opponents to the program are ‘small but vocal.’  That label is straight out of the corporate guide to minimizing the appearance of public opposition (chapter 7 verse 12).  No matter that the label has absolutely no connection to reality given that now 25 cities and counties in CA have officially demanded a halt to the ‘smart’ meter program and four have actually criminalized wireless meter installations.  No matter that thousands of ‘smart’ meter health complaints have been filed with the CPUC.  No matter that widespread protests and groups forming all over the state of California have presented PG&E with one of the biggest crises in its ugly history.

Reality must be quite an inconvenience to the corporate agenda.  Truth a real annoyance.  Good thing we have the mainstream media to obscure it all for us.

Commissioner Simon goes on to say:

“We have installed 10 million meters, and this is the only group from Marin County that has staged a protest based on radio frequency,” he said. “Why is it just isolated to their group?”

This is a blatant lie and absolute distortion of the truth (and he knows it).   Surely the journalists who are covering this story are aware that there are dozens of groups and thousands of individuals all around the state who are mobilizing to stop this assault on our health and well being, including the Scotts Valley Neighbors Against Smart Meters, Sonoma County Republicans, EMF Safety Network, West Marin Citizens Against Smart Meters, Environmental Options Network, and many many others.  And yet Commissioner Simon’s rhetoric goes unchallenged.

Then Commissioner Ryan goes on to re-write history, attempting to nudge herself and her reputation onto the sane side of a moral crisis that is increasingly enveloping the Commission:

“I’ve always been of the opinion that there should be some consideration of opting out, provided people pay their full freight,” she said.

Ryan added that she has spoken to California Assemblyman Jared Huffman (D), who represents Marin, about the possibility of creating a local assessment district so Marin residents can pay for wired meters. Huffman has authored legislation that would authorize wired as well as wireless installations.

So let me get this straight.  The PUC decide they want California to be one of the first to implement a ‘smart’ grid, so without any public consultation whatsoever, they commit California ratepayers to a $2.2 billion debacle.  They approve a wired version of the smart meter initially, avoiding possible violations of the state’s environmental laws.  In order to be the first, they decide to allow the technology to be installed throughout the whole state without so much as a pilot program to ensure that all is well.  Then in a daring ploy of bait and switch, they contract with Silver Spring Networks- a telecom corporation based in Redwood City- to install the meters using wireless technology- without having to undergo any environmental review.   The Commission rubber stamps PG&E’s outrageous rate hikes to pay for a technology  that we were never consulted on or asked if we even wanted in the first place.  Even the utility rates of the poorest customers have increased to line the pockets of the utility industry.  Not even a simple notification of elected governments of cities and counties that they are placing millions of wireless meters and thousands of new antennae, violating local franchise agreements.  Very little (if any) advance notice for the rest of us.

After their carelessness and negligence in allowing wireless technology as a platform is showcased for the world to see, as local elected government after government formally rejects the technology that is making their people sick, they have the audacity to demand a ransom from customers who have already been forced to pay for a technology that they don’t want.  This confirms rumors that have been reported- that PG&E plans to charge $50/ month extra to customers who don’t want a stupid meter on their home.

There is a word for that.  It’s called extortion.

the crime of obtaining of property from another induced by wrongful use of actual or threatened force, violence, or fear, or under color of official right.
We’ve said it before and we’ll say it again.  PG&E is a criminal organization (even though many of their employees are good-hearted and well meaning).  Their reckless and homicidal decisions to put profits over safety have resulted in the deaths of people in San Bruno, Hinckley, Kettleman City, and many more cities and towns.

And the state is covering for the utility executives every step of the way.   The CPUC is- in the view of an increasing number of Californians (even their own employees)- illegitimate servants of the corporate agenda, in love with money and hostile to the welfare of the public.

I have an idea- let the billions of obscene corporate profits cover the cost of disabling the wireless components of the meters, re-hiring the 1000 meter readers that they let go, and letting us live our lives in peace- without the spectacular corruption and fetid lies ringing in our ears.

Then there’s this gem:

Mark Duvall, director of electric transportation and energy storage at the Electric Power Research Institute, agreed that the negative press means utilities and regulators should take the issue seriously. But in the same breath, he argued that all research done to date on the subject indicates there is no real or present threat.

“Yes, there are some hiccups,” he said, noting that utilities had installed as many as 6,000 meters a day in some areas without much problem. “But you need to look at all the societal benefits. These are significant technological accomplishments.”

Hiccups?  Really?   Try blackouts, heart arrythmias, and migraines.  Some of these tech guys remind me of little boys who never grew up.  When their parents tell them that the train set they have extended into the kitchen might trip grandma up and they’re going  to have to remove it, they kick and scream and have a tantrum.   “B.b.b.b.but MOM…it’s a significant technological accomplishment!! You can’t make me take it down!”

Can we rely on Governor Brown to be a responsible adult and make right what his predecessor so royally screwed up?  I hope so- but I’m not holding my breath.   PG&E’s former vice president Nancy McFadden- who engineered Prop. 16, last year’s failed attempt to circumvent local democracy- – is now essentially the Governor’s chief of staff.

I think I need a stiff drink.