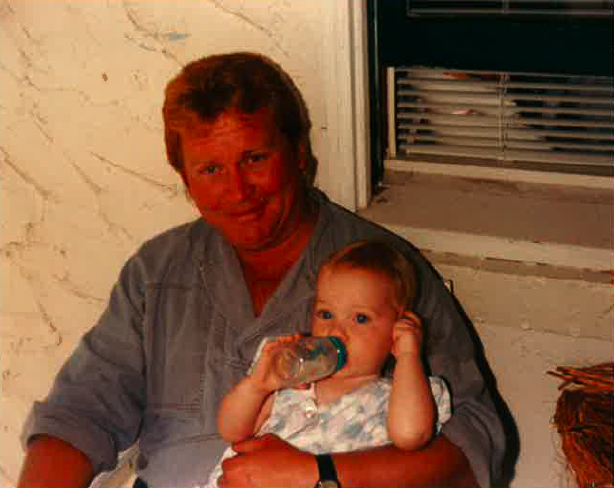 Details have come to light of a man killed by a Pacific Gas and Electric (PG&E) Smart Meter that caught fire in Vacaville, CA on July 9th, 2010.   Larry Nikkel of 230 Arbor St. died from a suspicious electrical fire that consumed his home the day after Wellington Energy, contractors for PG&E, installed a Landis & Gyr “smart” electric meter.  A wrongful death suit lawsuit filed by the family against the utility, subcontractor, and meter manufacturer has now been settled for an undisclosed sum.

The circumstances surrounding Mr. Nikkel’s death add a grave and tragic chapter to the growing human cost of the ‘smart grid.’ The following account is based on interviews with his brother Walter, as well as details obtained by the fire incident report, investigation, and coroner’s report. 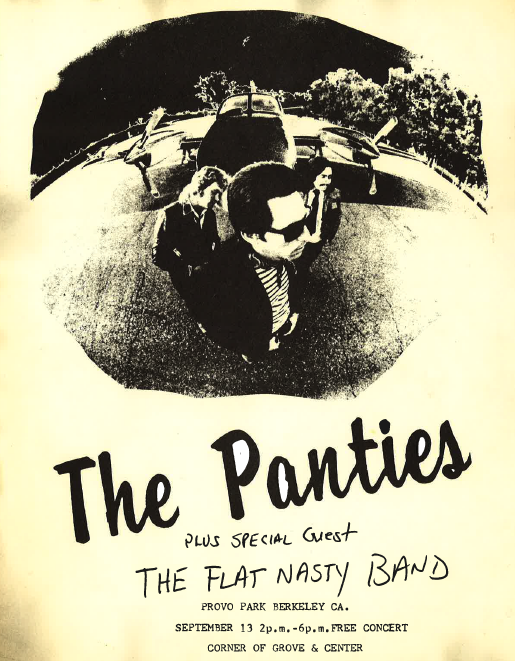 Larry Nikkel worked for more than 30 years as the groundskeeper at Solano Community College, and was well liked in Vacaville by those who knew him.  He was in a rock band in the Seventies called The Panties who played gigs all over the East Bay.  Larry loved his rock music and he loved his 1958 Gretsch guitar (the same kind as Chuck Berry played).  The guitar- worth thousands- was given to Larry by a co-worker at the College, underscoring how much he was loved and admired by those who knew him.

Larry was diagnosed with throat cancer in early 2010 and had just finished his chemotherapy treatment at the time of his death.  The day before he was killed, he had submitted the paperwork to retire from his job at the Community College.  On July 8th, 2010, according to neighbors, Wellington Energy came through and deployed electric smart meters all along the street, including on Larry’s house.  Less than 48 hours later, Larry was dead- killed by smoke inhalation and burns from an unexplained electrical fire that consumed his home.

According to his brother Walter, who had spent time with Larry at his house the morning before the fire (and only hours after the smart meter was installed), there were serious electrical problems in the house that day.  Larry had tried to boot up his laptop to watch a DVD that evening, but the computer would not function.  The cable box did not work either.  Walter and Larry both heard a very loud, high pitched “snap” coming from the wall.  Later that night, after Walter had returned home, he received a call from Larry, who said that the ‘house was humming.’ He regrets to this day not coming over immediately to investigate what was wrong.

At about 10:30pm on July 9th, a man walking down Arbor St. saw flames coming out of Larry’s house.  The man opened the garage door to see if anyone was inside but this caused the fire to “flash” and so he was forced to retreat and call the fire department.   By 10:40, fire fighters were on the scene.  After battling the fire, crews entered the house and found Larry’s body in the hallway bathroom, under a dresser (which Walt speculates he may have pulled on top of himself to shield against the heat).  He had shoved towels under the door, and the water was running in the sink.  He was on the floor, having succumbed to smoke inhalation and burns.   Larry had placed his beloved guitar in the bathtub, where perhaps he hoped it would survive the flames (it did).

Walter remembers hearing a lot of fire engine sirens that night and wondering whether there was a large grass fire in the area.  He received a call from Larry’s neighbor at about the same time, and immediately got a bad feeling.   He got in his car and when he arrived at his brother’s house, the house was charred and blackened and Larry’s body was already in a bag.   Walter was distraught and started to open the bag but was stopped by the police. “Why aren’t you working on him??” he remembers yelling at the emergency responders.

The official Pathology Report notes that the cause of death was smoke inhalation and thermal injuries (burns): 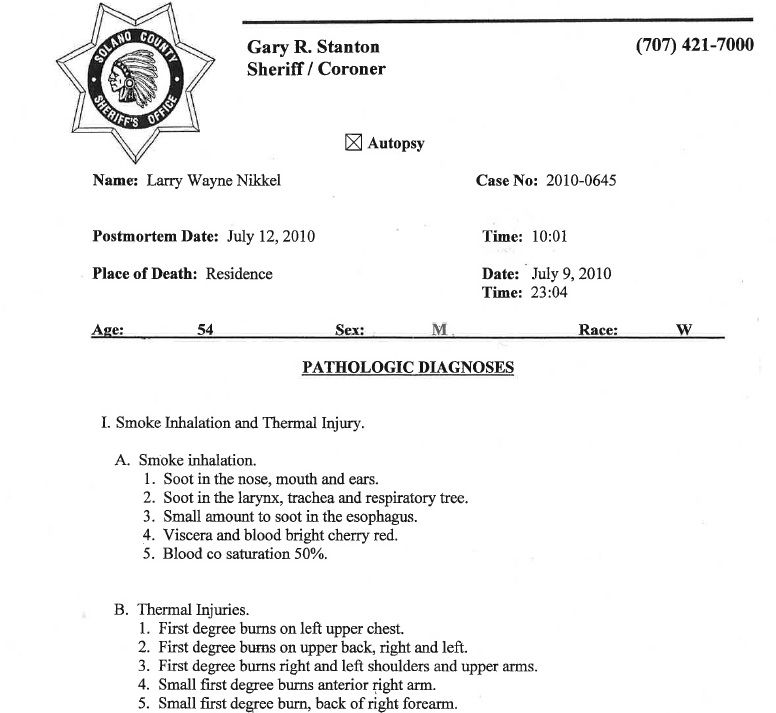 The official cause of the fire- according to the Vacaville Fire Department’s Investigation was “undetermined, but was most likely caused by an electrical problem” 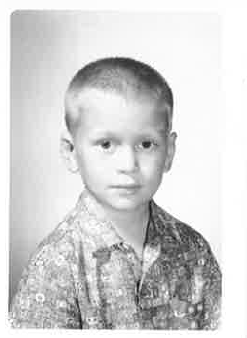 About a month after the fire, Walter met Ken Burton at the house.  Ken was the former bass player in Larry’s band, a friend of the family and also a retired fire fighter.   Walter had noticed that his brother’s swamp cooler had fallen to the ground from the window, and was not burned except that the motor was charred, and the belt was melted to the pulley.  The two speculated that something had caused the power cord to become so hot that it caught the plywood that fit in the window on fire, and this quickly spread throughout the house.

While they were talking, a fire truck pulled up and Vacaville Fire Dept. Battalion Chief Jansen came up to them.  He asked how they were doing, and walked back to the charred breaker box, where two of the breakers were found tripped right after the fire.  He asked them if they were aware that the “smart” meter was installed on Larry’s house the day before the fire.   It turned out that PG&E had hurriedly removed the meter following the fire.

A month later, Walter was clearing the neighbor’s grape vine out of his tree.  That night he started hearing loud buzzing and humming sounds coming from his wall.  He immediately called PG&E, who sent a lineman out and discovered that the neutral wire was off the pole.  (Walt figures he accidentally pulled the wire off).  As a result, 2 TV’s, and a DISH DVR player were fried because of over voltage.

Suddenly, it clicked for Walter.   The humming and popping noises.   The electrical problems.  The “smart” meter having been installed the day before the fire.   His brother Larry had died because of PG&E’s smart meter.  He did an internet search for “smart meter hazards” and put two and two together, finally grasping what likely killed his brother. 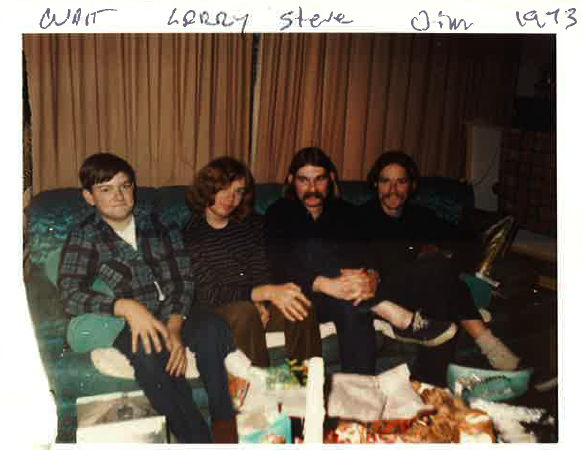 According to electrical engineers, the popping, humming, and appliance damage are all telltale signs of an electrical problem caused by arcing, possibly from a meter that was not installed properly.  Arcing can lead to fires and explosions.  (As we documented in late 2010 in our interview with a whistleblower from Wellington Energy, workers were encouraged to ignore safety hazards and only had 20 hours of training, violating FCC requirements that smart meters be installed by a professional electrician).  Larry’s death appears to be a direct result of the kind of violations uncovered by the whistleblower, whose reports were summarily ignored by the CA Public Utilities Commission.

The case was settled out of court earlier this year, showing that the utilities and meter manufacturers were alarmed about the potential to lose the case, as well as more terrible publicity related to their meter program.  The settlement- though not ideal as it avoids a verdict that might force the utilities to compensate others who have suffered smart meter fires or even recall the meters- has nonetheless provided a sense of closure to the family, who would have had to live through the pain of Larry’s loss once again during a trial. 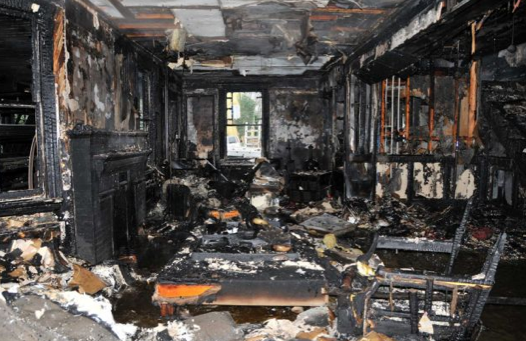 A Stamford CT house fire where 5 people died. The evidence leads to a smart meter as the culprit.

Meanwhile, the number of smart meter fires has continued to grow.  Last year, a Stamford CT woman lost five members of her family after a fire likely started by their ‘smart’ meter.  Twenty-four hours later, her home was bulldozed, eliminating any evidence that could have been collected showing why the deadly fire started (and preventing future fires) In August 2012, Peco Energy of Pennsylvania was forced to suspend its deployment after at least 26 separate incidents where newly installed smart meters had caught fire or exploded.  The EMF Safety Network has tracked many of these fires here, and we have documented a number of these incidents at StopSmartMeters.Org.

A June 15th 2012 presentation by the Ontario Fire Marshal analyzes the numerous smart meter fires being reported in Canada and abroad and states:

It’s fairly clear by now that there is another major safety problem with smart meters- aside from RF radiation pulses.   Hundreds of fires, explosions, and other electrical problems have been documented.  Pre-market safety testing simply did not happen in the rush to harvest stimulus funds and corporate profits.   The process of third party safety testing might have uncovered these problems before they ended up killing people, but unfortunately UL certification was never sought.   In cases of fire, the utility’s strategy has been to blame faulty household wiring, a candle, hot ashes, anything to take the focus away from the smart meter.  Homes with old or vulnerable wiring seem to be especially at risk, and surely the utilities know this by now.   But they do not warn, and they do not inspect.

If we had responsible utility companies that prioritized health and safety, smart meter deployments could have included a safety check of the socket and wiring.  Unfortunately such caution would have required professional technicians to work longer hours- a cost the utility company refused to bear.   They can’t seem to have anything get in the way of their guaranteed 11.5% annual returns on shareholder investments (in the case of PG&E).  Sadly, for whatever reason most fire departments have failed to investigate smart meter fires as a systemic problem that requires a systemic solution. Meanwhile more homes burn and more people die.

When the Nikkel case came to the attention of Stop Smart Meters! we immediately connected the family with a lawyer and started to try and obtain documents from the Vacaville Fire Dept.  Unfortunately, multiple attempts to get a copy of the investigation failed, even when requested by members of Larry’s own family.   The attorney for the case- David Kyle- who won his own small claims court case against SCE- said he’s never seen such reluctance to release these kinds of documents.  It finally took a subpoena and legal threats to obtain the investigation, something that a bereaved family should not have to go through simply in order to understand why their loved one died.

Unfortunately despite pledges of safety and reform from PG&E and the CPUC following the horrific explosion in San Bruno that killed a dozen people and razed an entire neighborhood, the same decisions are still being made- trading people’s lives for shareholder profit.  You needn’t live near a gas pipeline to be at risk.  This time it is a device that is being installed on most everyone’s home, in every neighborhood.

While PG&E and other utilities install unsafe devices that are costing some their homes and their lives, the CPUC- led by the industry itself in the form of Mr. Michael Peevey- looks the other way.  Such inaction in the face of overwhelming evidence of mortal risk is truly criminal.   Let’s make sure that Larry, and others who have lost their lives in the name of the ‘smart grid’ are not forgotten, and that we honor their memory with action and political change.

Larry’s obituary can be found here. 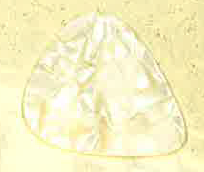