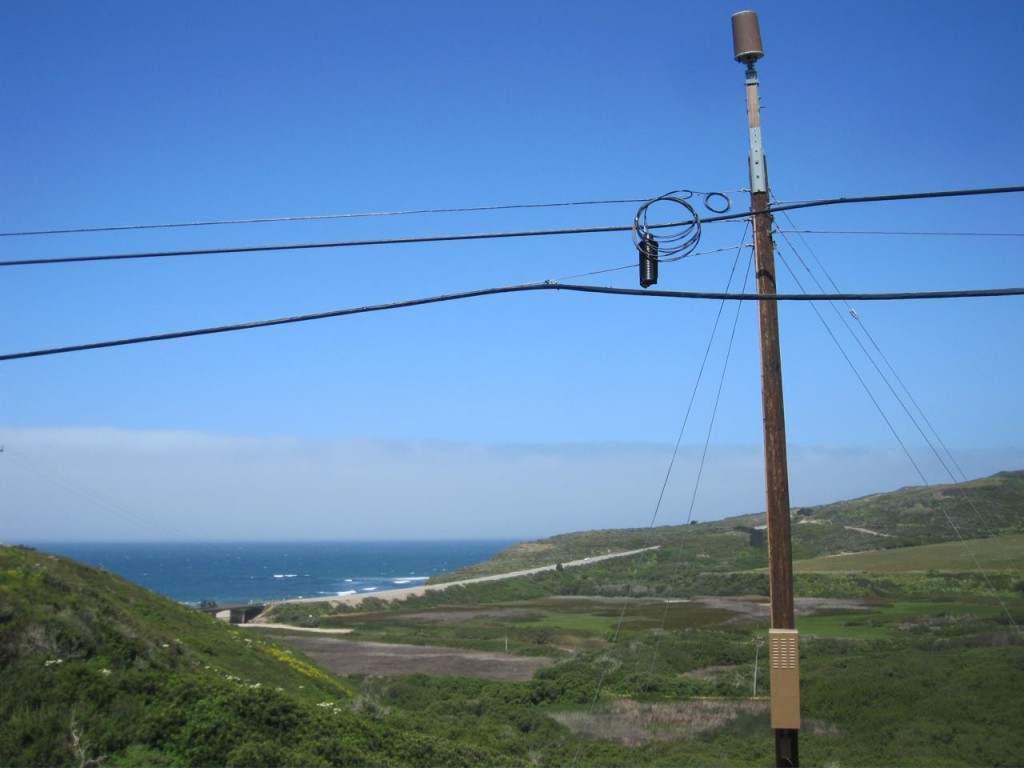 A battle is on between Santa Cruz County north coast residents and Verizon Wireless, who are attempting to violate local laws and install a series of 6 cell sites along Santa Cruz County’s North Coast, as part of their 4G LTE (“long term evolution”) network.   Here at StopSmartMeters.Org, we think their network should be renamed LTD (“long term devolution”) because of the documented damage from wireless to human DNA (pdf).  A local group- Coastal Neighbors Against Unnecessary Wireless Facilities- has been fighting the proposed antenna, holding meetings and lobbying local officials.

In cooperation with Coastal Neighbors Against Unnecessary Wireless Facilities, Stop Smart Meters! is planning a major protest against the smart grid and wireless proliferation- for Saturday July 21st at 4pm in front of the Verizon store on Pacific Ave. in Santa Cruz, California. (cross street Cooper) 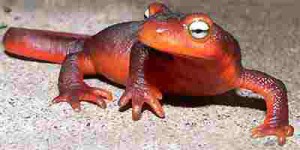 Amphibians- like this California Newt- are particularly at risk from wireless development: A Spanish study found that frog tadpoles exposed to a cell site at 100m “remained sideways or tilted and swam (in) circles” and had a “90% mortality rate.”

In addition to forcing unwanted cell towers into communities, and fighting health warnings on their products, Verizon also partners with PG&E and other utilities to collect your private utility usage data via their wireless network.  Those suffering from electro-sensitivity, cancer, and other conditions linked with wireless  along with their friends and family- are encouraged to attend and share their stories, in public- in front of the store.

The Coastal Commission will decide whether or not to issue a permit for this development at its meeting sometime between August 8th and 10th (exact date tba) at the Santa Cruz County Board of Supervisors Chambers, 701 Ocean St. 5th Floor.  Mark your calendar, plan to show up and speak, and/ or send a letter (see below).

The following opinion- by our Director- appeared last Sunday in the Santa Cruz Sentinel and is re-posted here in its entirety:

Perhaps a good time to consider the sanity of blanketing our County in microwave radiation- a Class 2B carcinogen according to the World Health Organization(pdf)- is the moment right before the last few wild and free areas of the County are about to be put at risk because of our seemingly insatiable appetite for mobile technology.

In January, the Santa Cruz County Board of Supervisors quietly approved a plan by

NextG (now called Crown Castle)- for Verizon Wireless- to install seven cell towers- so called “distributed” or “microcell” antennas along a remote stretch of Highway 1 between Santa Cruz and Waddell Creek in Big Basin State Park.  This latest project is part of the “Distributed Antenna System” being promoted by industry and waved through by the CA Public Utilities Commission, an agency adept at bullying local governments into accepting a wireless smart grid that no one wants.  “Distributed” means a new cell antenna could appear on the pole right outside your bedroom window- pulsing microwaves 24/7- potentially reducing your property value, not to mention your libido and mental function – and there would be little you could do to prevent it.

Evidence of wireless health damage is mounting.  Dr. Poki Namkung, the top Public Health Officer in the County, issued a report in January entitled “Health Risks Associated with Smart Meters.” Her report cites research showing harmful effects on sperm, double strand breaks in DNA, and cancer.   The dream of high-speed, on-the-go, smart phone connectivity is hitting up against the reality that this dream may only possible at the expense of our health, our environment – and for some so sensitized to even the weakest signals — basic access to the necessities of life. 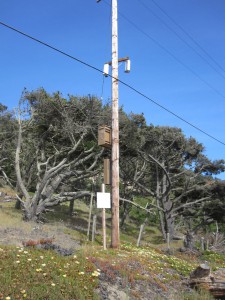 For Santa Cruzans, our stewardship of the most pristine natural ecosystems in the County is at stake.   The northernmost antenna is proposed to be located only yards from Big Basin State Park, directly adjacent to the Waddell Creek wetlands, home to endangered species such as the Red Legged Frog, Western Pond Turtle, and Coho Salmon.  Scientific research indicates a myriad of impacts on plants and animals (not to mention humans) who are exposed. In one study of the effects of cell tower radiation on tadpoles, a 90% mortality rate was observed.[1] Other studies show links to bee decline. [2]  The Waddell and Scott Creeks are both teeming with life and are conservation success stories. It would be extraordinarily short sighted to put that at risk.

There is a reason that the Telecommunications Act– signed by Pres. Clinton in 1996- prohibits local and state governments from rejecting cell towers because of environmental concerns.  It’s because those concerns are justified.  Such a restriction is of course blatantly illegal and unconstitutional, prohibiting local governments from carrying out the duty they are sworn to uphold- to protect public health and safety- but the telecom firms have well paid lawyers.   And consumers are left with unexplained headaches and damaged landscapes.

Fire concerns have also been raised.  NextG Corp. is a defendant in a lawsuit filed by residents of Malibu who suffered nearly 15 million in damages from a 2007 wildfire caused by overloaded power poles that blew over and sparking in high winds.  The last thing Bonny Doon needs is another wildfire.

Emergency communication is an important issue. AT&T and Sprint have service along Highway 1 in this area- any cell user dialing 911 has access to these.  There are also call boxes along remote stretches.  Streaming 4G video is not an essential emergency service.

The existing cell panel mock ups at seven locations along the coast give an idea of what is proposed to be made permanent, but only if the California Coastal Commission issues a Coastal Permit in July. There is still time to stop this ill-conceived project from going forward, if the community mobilizes.

When it comes to the beauty of the North Coast, the safety of our communities, and the survival of entire species, we should all question whether we even want to use cell phones on our wild North Coast beaches.

2.  Come to the protest July 21st 4pm Verizon Store Pacific Ave. (across from Cinema 9)- link your friends to this page- using a safe, wired connection!

4.  If you- or anyone you know is (god forbid) a Verizon customer, switch to another provider (and tell them why!) or even better lose the cell entirely.  Call Verizon customer service at: 1.800.837.4966  You have the power to quit!

5.  Learn more about the project by downloading and reading the files below. 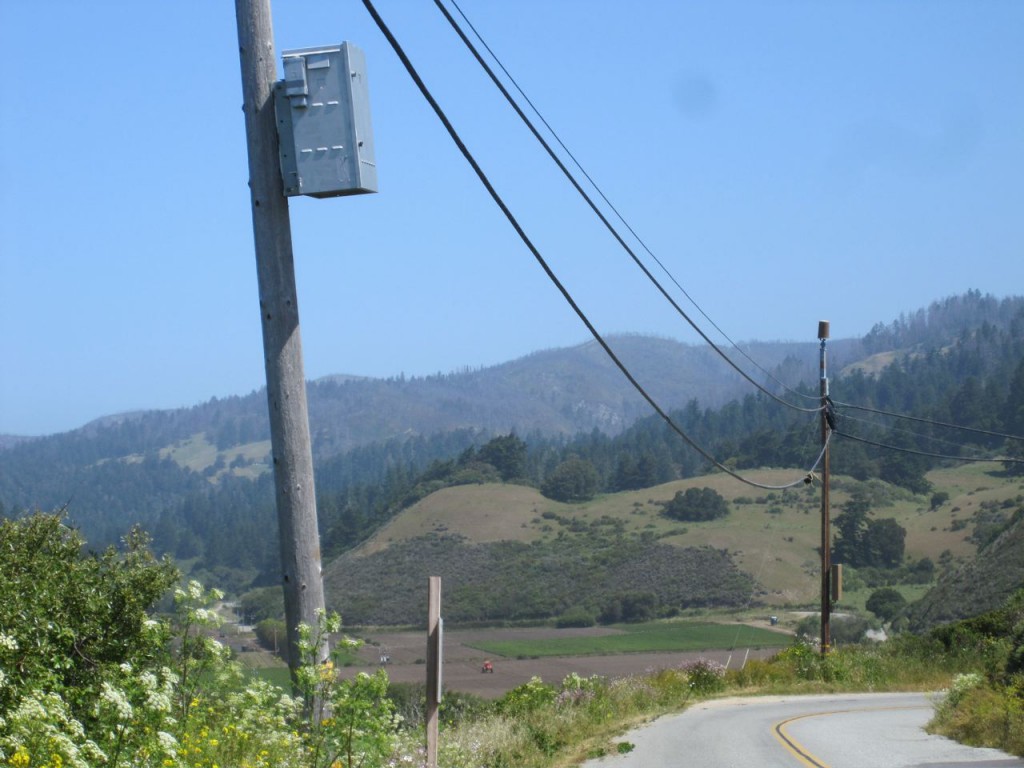 Print this flyer out and distribute it!!

[1] Balmori, A. (2009). Electromagnetic pollution from phone masts. Effects on wildlife