Forced Off Grid for Speaking Out: 3 Months on, the Hart Family Finds Hardship- and Self-Reliance After PSREC Cuts the Wires

It’s been three months since Plumas Sierra Rural Electric “Co-Operative” cut the electricity off to our home though we have paid every penny of electricity that we have used.  They say it’s because we refused to pay the “opt out” fees they added to our bill.  We say we never *opted in* and their disconnection is retribution for raising awareness in the community about the risks of their AMR smart meters.  You can read all the sordid details of PSREC’s actions against us here. 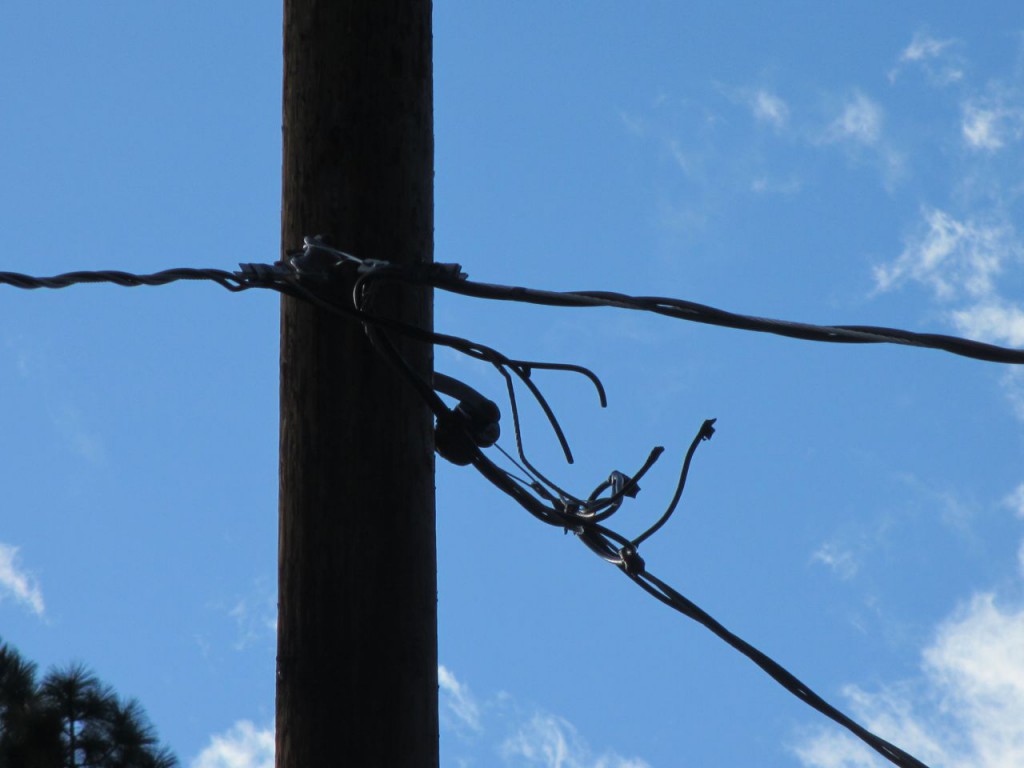 PSREC literally cut the wires to our all-electric home in California’s Sierra Nevada Mountains on Feb. 19th and we have been living without electricity ever since

It has become clear that we are far from alone, as we have seen in Nevada, Wisconsin, Australia, New York, and many other places.  Utility disconnections of those who refuse “smart” meters are part of a disturbing international trend to hold residents’ essential services hostage in order to force an irrational and dangerous technology.  If the public really was for the “smart grid”, such dirty tactics wouldn’t be necessary.

We refuse to “just give in” and pay to defend our health, safety, and wallets- especially for something our neighbors get for free. (1)   Though it has been a challenge, and at times a painful struggle, we refuse to participate in an extortionate relationship with a utility industry that has injured people and lied about it, used microwave radiation and deprivation of utility service to coerce payment or compliance.

We will simply not go along with this.

So how has it been living for the last 3 months with no electricity?

The situation is challenging.   We live in a rental house that is fully electric- no gas or propane here at all.  Luckily there is a wood burning stove- otherwise we would have probably frozen to death long ago- to the delight of the utility.

On the plus side, we already have some of the necessary equipment to cope from when we rented an (intentionally) off the grid home in the Santa Cruz Mountains a couple of years ago.

Faced with months of cold mountain weather we had to change our lifestyles and adapt to new imposed circumstances.   It’s an odd feeling- you’re willing to pay your electric bill fair and square – but they won’t take your money.  They will go directly against the financial interest of the “cooperative,” your doctor’s orders, local and international public opinion, peer-reviewed science and common sense- following the marching orders of their increasingly crooked industry just to maintain the absurd “dogma” that wireless is safe, and that we should now have to pay a fee if we want to avoid it.  The situation is- of course- absurd and that’s the way we should treat it.

Still, they insist we have a “choice”- “choose” to pay the money or “choose” to have no electricity.   Since we’re not going to pay the fee, it seems that at least for the moment- while state, federal elected officials, joined by the illegitimate CA Public Utilities Commission, side with the utility and say they are now authorized to disconnect paying customers and until we can fund and mount a successful legal challenge, it seems we have to pay up or learn to live without what they’re selling.

Is it even possible to live without electricity in an all electric rental home, we wondered?

The best way to deal with a challenge is to figure out what the barriers are in the first place and then split them into smaller, more manageable parts.  So we looked at how we use energy in the home and how we could get along without an unreasonable and dangerous utility if we had to.  We’ve put together this brief guide to our lives living off the grid in the hope that it may help empower those of you in similar situations.  Feedback is very welcome. 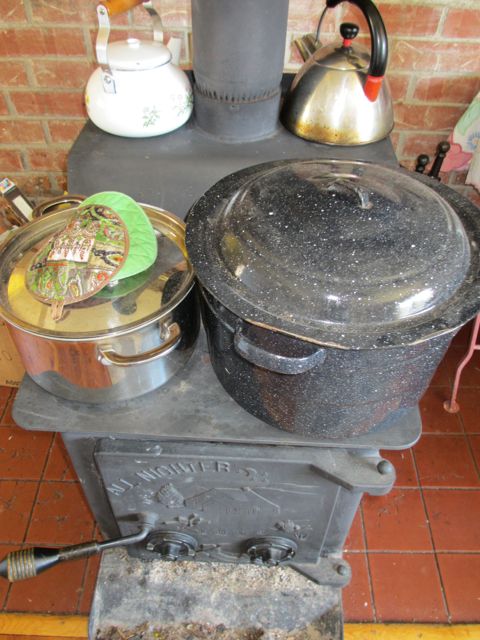 A woodburning stove provides heat, cooking, and hot water for dishes and bathing- only wood req’d

A wood stove or fireplace is key to effective off grid heating and cooking.  Some local air quality regulations prohibit these in built up areas, but a propane stove can also be used with ventilation and caution.  Large pots of water on a wood stove (like the ones on the left) can retain heat in the room and provide available water for washing dishes and bathing. 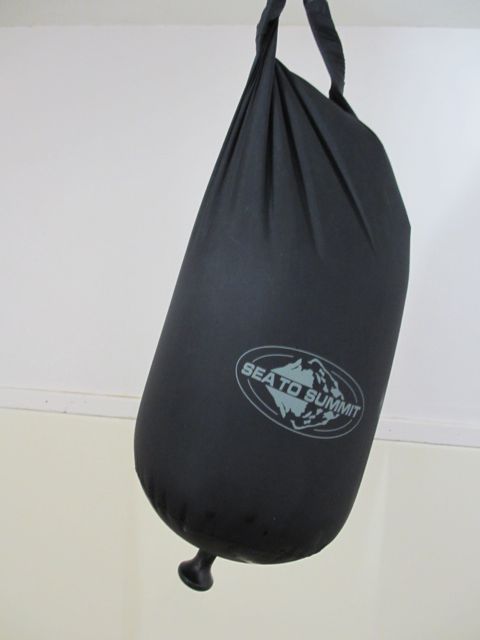 This is a pain. Bob Marshall the hotheaded General Manager of PSREC no doubt gets a sadistic grin on his face thinking about forcing us to take cold showers in the winter (I tried it once and don’t recommend it- your skin actually does turn blue).   We have had to heat up large pots of hot water on the wood stove to wash the dishes or take a shower.  In summer, that won’t be possible and we’ll have to use the propane camp stove.  If this goes on much longer we may get a barrel and paint it black, stick it in the sun and run a hose to where it’s needed.   During the warm season, solar hot water really is that simple.  A shower without the extortion or dirty carbon footprint- I feel cleaner already! 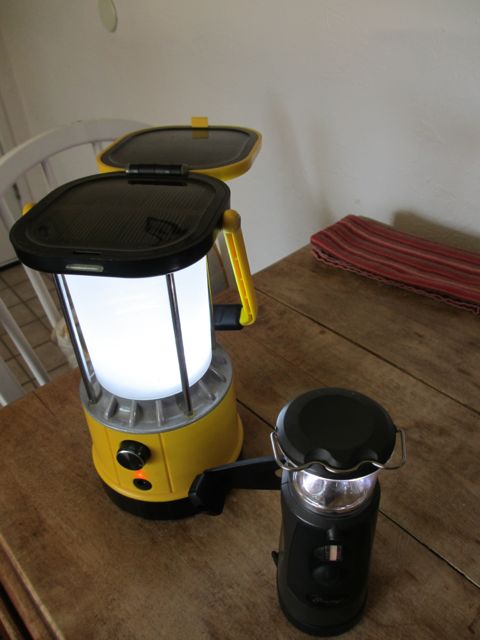 This lantern on the left has a solar panel or AC port for charging. The one on the right can be wound up by hand or plugged in

People actually used to sleep when it was dark and wake up when it was light.  We use mostly rechargeable and solar or wind-up LED lights and sometimes beeswax candles at night.   Plus headlamps.  We find we are sleeping better without all that (dirty) electricity in the house. 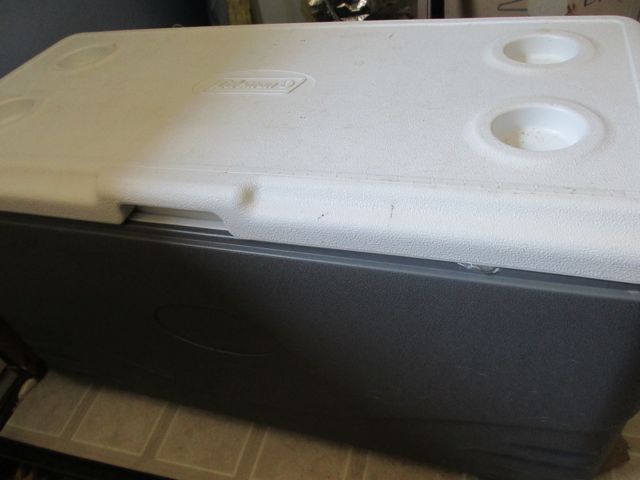 A decent quality cooler will actually keep your food cold for a day or two. A lower quality one not so much.

We use a large cooler and change out the ice daily, provided by a friendly neighbor’s freezer.  We bought bottled water in a gallon size, then we freeze the whole thing and the resulting ice blocks last 1-3 days (depending on outside temperature), and don’t leave a watery mess in the cooler. If you can’t find a friend to freeze your water bottles for you, buy blocks of ice instead of ice cubes, they will last a lot longer.  It is a pain and if this goes on much longer we’ll be looking at buying a propane fridge with the money we’ll be saving on our electric bills.   Guess if PSREC doesn’t want our money…. the RV place down the road definitely does. 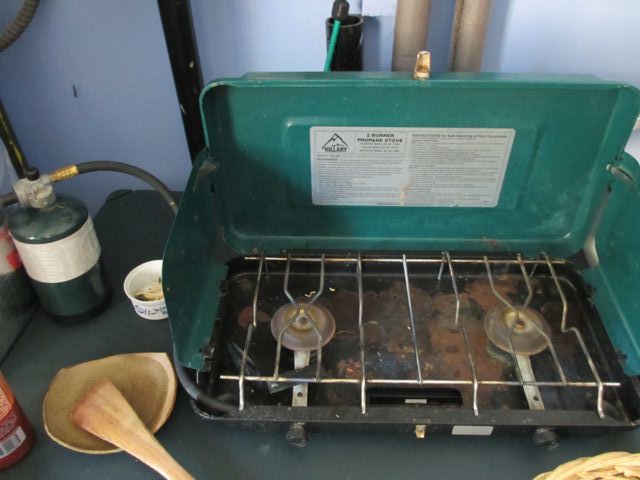 When it’s cold outside, a wood burning stove can double as a cooking and heating appliance and has for thousands of years.  When it’s warmer, a simple 2 burner camp stove works well for most things.   An oven can run off of propane gas or even the sun with good exposure and little wind.  Having an indoor space like a laundry room with adequate cross ventilation makes it possible to cook inside.    Otherwise depending on your climate, you may need to cook al fresco- at least for a little while.  Another option is the rocket stove. Rocket stoves are scalable and designed to heat up water quickly and efficiently using fuel as small as twigs.  Plus you can build your own. 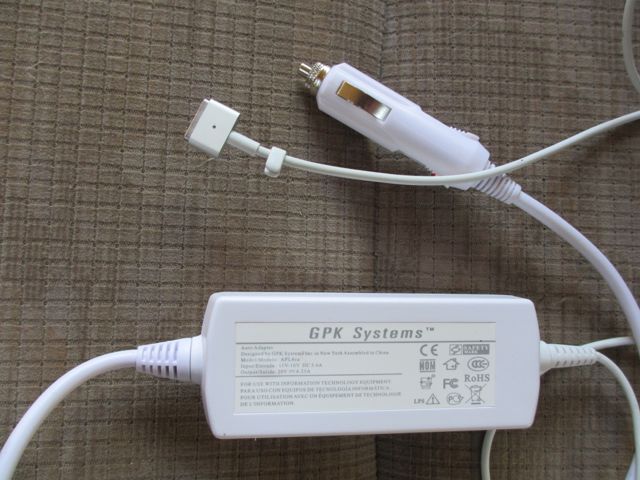 The irony of the digital age is that most devices themselves require very little electricity to run.  New ones have batteries that- when charged-  can sometimes last all day.  We charge our notebook computers (that we use with a wired ethernet cable of course) in our car using a cigarette lighter DC adapter (above), and have several computer batteries we can charge to extend our work.  A small, inexpensive DC-based solar panel and battery system can power electronic devices, LED lights, radios and many other low voltage uses.  And it is possible to install such a system while minimizing EMF pollution.

All of the above is possible in a rental, without making any permanent change to plumbing or wiring, or even installing any solar panels.   If you own your home, there are of course more permanent (and pricey) systems you can put in place to make it easier and more reliable for the long term.

Even without these improvements, it has become clear that one can live manageably without grid electricity as people have done for thousands of years (more than 1.6 billion in the world apparently still do– including 180,000 households in the US).

The utility industry’s coercive practices depend on our reliance on them.  If a lot of people started going off grid, threatening profits in a big way, the coercion would fall apart.  It just takes a little work, bravery and creativity to break that reliance.  Of course, when people are forced off the grid, the real losers will ultimately be the utilities, whose coercion is backfiring into lost income, public resentment, and a “spiral unto death” of fewer customers and ever-higher prices.

The dying utility dinosaur won’t go quietly however.  Laws prohibiting breaking free from the utilities – like the one in Florida currently being challenged– will likely spread (and be resisted) as governments and law enforcement are brought in to bring the public back into line, to continue our dependency on a utility industry in the process of wrecking the planet and our health.

We could all do without entitled, arrogant, profit-mad utility companies imposing their will on us. How about delivering utility service and actually listening to their customers?  If that’s not going to happen, there are other ways we can make this work- from the bottom up via decentralized microgrids (an idea that keeps utility executives up at night).   Three months in, we’re finding out more about those other ways every day, and turning utility bullying back against the bullies.

Yes we absolutely insist and demand that our electricity be switched back on – we have the right to a standard analog meter at no extra charge. But we are not desperate or grovelling like these outlaws are accustomed to.  Their petty and senseless decision to turn us off has only strengthened our resolve to resist the fees & the smart meter program as a whole.  The longer this goes on, the worse they look.  And we’re not going away. 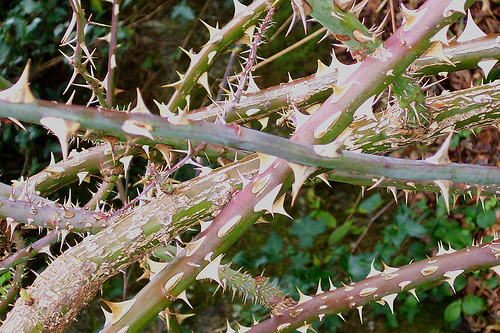 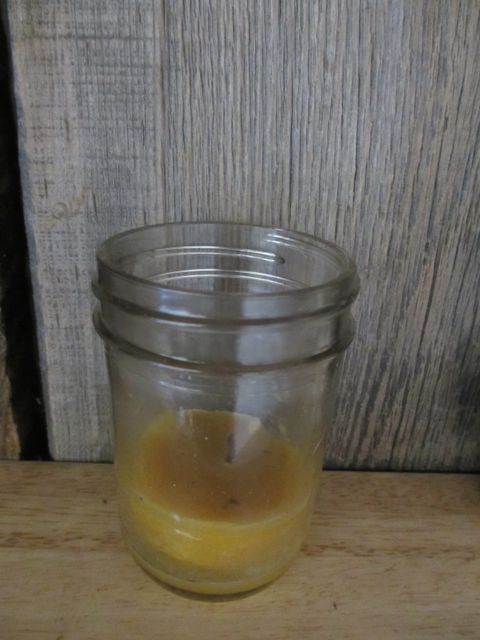 If you can help with a donation to our legal fund, we would be most grateful- just indicate on your check or paypal donation that it is for legal expenses.  Thank you.

(1) Other PSREC customers who used analog meters at the time their ‘opt out’ policy was approved in August 2013 have not been forced to pay the fees- just the Harts.  PSREC allows remote homes to self-read their analogs at no extra charge due to the cost of sending meter readers out.  We are simply asking for equal treatment- a requirement of the California Public Utility Code (453a)

14 Responses to Forced Off Grid for Speaking Out: 3 Months on, the Hart Family Finds Hardship- and Self-Reliance After PSREC Cuts the Wires