Smart Meter or NO Power at All? Nevada Energy Sends Three Armed Men to Disconnect Power- Just for ‘Opting Out’

Nevada is supposedly one of those states with a smart meter ‘opt out’ policy.   On the ground, however, the reality is a little different.

“Sarah” (not her real name) lives outside Las Vegas, Nevada.  Like many Americans she has been impacted by the downturn in the economy and is struggling to make ends meet. Sarah has always paid her bills on time, and makes protecting her health a priority.  For years Sarah worked on humanitarian projects in the Middle East: drilling wells, and providing drinkable water and renewable power to remote villages. So she is familiar with the need for safe, reliable public services.  Now, it turns out that she may need some humanitarian assistance herself- not in the developing world but right outside Las Vegas, Nevada, USA.

The story starts when Nevada Energy (NVE) installed a ‘smart’ meter on Sarah’s bedroom wall in January without permission, or even so much as a few days’ notice.

Sarah reports that she does not have any prior history of medical issues.  Shortly after NV Energy installed the smart meter, she started noticing an increase in her heart rate first thing in the morning and an elevated blood pressure.  She felt fatigued, and started having headaches.  A low grinding sound had started when the meter was installed and this made it difficult for Sarah to sleep, or even be in her own home during the day. She tried different things to get rid of the symptoms, but nothing worked.  Finally it dawned on her: the only thing which had changed in her life was the meter.  When she started researching the issue, she realized she was not alone. Others were experiencing the same annoying humming grinding sound, the same adverse health impacts- and linking it to recent smart meter installations.  She has amassed a whole binder of studies about the negative effects of EMF’s on health.

A letter from Sarah’s doctor to NV Energy reads:

“Neurological and cardiological findings may be associated with pulsed EMF… EEG, ECG, MRI and sleep study changes may be associated in some hypersensitive individuals to pulsed EMF. If multiple Smart meters are in use in her area, the possibility of constructive and destructive interference between the various EMF signals is a distinct possibility whose effects may be potentially more dangerous. I recommend that this patient be allowed to have NVE reinstall an analog meter at her house.”

So she called the power company, expecting that they would remove the unsanctioned meter right away- or at least come out and do an analysis to find out what was causing the grinding noise.  Months later, frustrated after at least six failed attempts to have NVE address the problem, Sarah finally purchased a standard analog meter and had an electrician install it at her residence.  She carefully photographed and recorded the readings on the old and new meter, to be sure that she paid for every kilowatt-hour used.  She attempted to return the unwanted smart meter to NVE offices, but was turned away.

On August 6th, at about 10:30am, three men from Nevada Energy, armed with guns, arrived unannounced on her property, removed the analog meter from the socket, took her analog meter as well as the unauthorized smart meter she had removed, and left her living without electricity. One of the men identified himself as an investigator with the company and said that he was investigating her for “criminal tampering.”

She was in tears, visibly shaken by the encounter, and recalls asking the men, “Why are you on my property with guns?” Their response: “this is procedure Ma’am.”  (If this has become the “procedure” then we need to act to stop this kind of utility intimidation and abuse.)

More than a month later, the lights are still off and Sarah hasn’t budged.  “They’re not putting that thing back on my house,” she says.

We asked Angel de Fazio, who has been on the front lines working to fight NVE’s smart meter program, what is going on here? Doesn’t Nevada have an ‘opt out’ choice?

Angel says “Nevada residents only won the right to be placed on the ‘delay list’, not a full ‘opt out’.”

In other words, if you wised up before the installation trucks came and still have your analog, NVE has a ‘delay list’ you can sign to ‘delay’ your installation date.  But if the power company managed to sneak on your property and install a smart meter- even without permission- then your choice is a smart meter or no power at all, as Sarah discovered.  Even if you have a letter from your doctor, the power company apparently thinks it knows best what’s good for you.

While awareness about smart meter problems has been greater in states like California, Maine, and several other states, the “take a smart meter or lose your power” policy remains quietly in force in other states where awareness may not be as widespread. However, people in these states (like Sarah) have had enough and are standing up to the utility industry in increasing numbers.

Angel tells Stop Smart Meters! that Nevada’s opt out proceeding has been a sham. “The Nevada PUC will be holding hearings on October 3rd-5th to determine which of the ‘non-transmitting’ meters they will trial to replace people’s analogs and how much they will charge for the ‘privilege’. Even the ‘right’ to have a non-transmitting meter is under threat.” In other words, there may be no official ‘opt out’ at all unless people organize and make more noise.

“NVE has conned the PUC into believing that only a certain number of people can opt out or their Federal Stimulus Grant will be in jeopardy.  That is a lie,” Angel says.

NVE has been calling people on the ‘delay list’ who want to ‘opt out’ and repeatedly pressuring them to accept a smart meter.  The company admitted that they lied to utility customers, telling them that the meters are federally mandated (which they are not), and telling people their power would be cut if they didn’t accept the meter (which they do not have the legal authority to do).  Similar stories abound about other utilities including Southern California Edison, Detroit Edison, Duke Energy, and Oncor.

Now NVE is accusing Sarah of tampering with their equipment, which she says is ridiculous, because she gave them plenty of opportunity to remove the problematic smart meter.  “I had no intention of stealing electricity,” she says.  “I just wanted the grinding noise and headaches to stop.”

Nevada laws are similar.  Despite this, NVE claims that Sarah “tampered” with the meter and are now charging her hundreds of dollars in fees and forcing her to obtain an 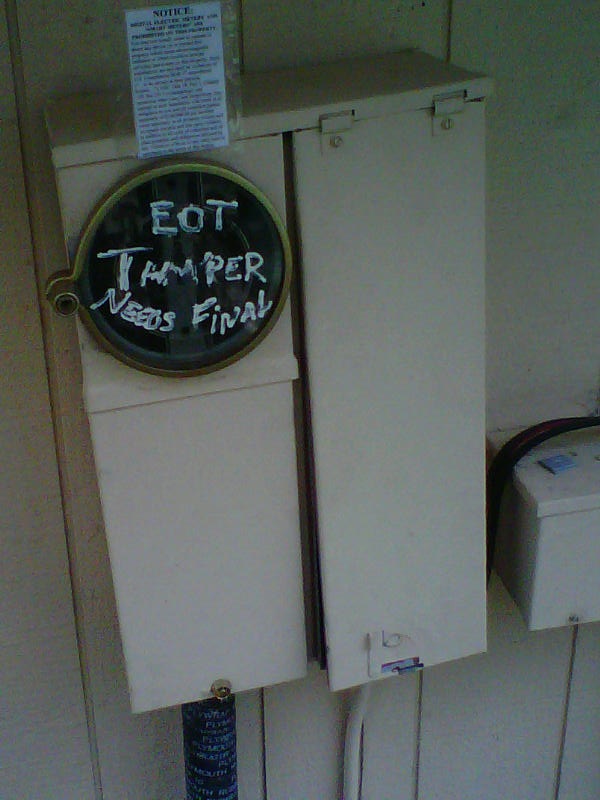 expensive County inspection.  For the last month, Sarah has been ‘camping’ in her house, unable to use her appliances, lights or hot water.  The laundry that was in the washing machine when they cut her power was locked in, and by the time she could get it out it was totally destroyed by mildew.  The NVE agents came without warning.

Sarah has borrowed a gas generator that she uses for an hour a day, but she’s worried that this is a fire hazard in the forest where she lives.   The power cut has had a devastating effect on her life, she says.  “My business has taken a nosedive since I have had to travel into town to access my e-mails. I can’t use my computer, fax machine, or any lights.  I’m cooking over a camp stove in my living room.”

Back in December, Stop Smart Meters! raised more than $1000 from supporters like you to help families who had been cut off by PG&E try to have a decent Christmas.  These donations helped people through a difficult time, and the outpouring of community support gave them strength to take back their power from the utility.  In part because of the strength of these families who refused to accept a forced smart meter (or a ‘non-transmitting’ meter), we now have an official analog ‘opt out’ policy in California.  It’s extortion for sure, but it’s better than the  policies they still have in places like Nevada. 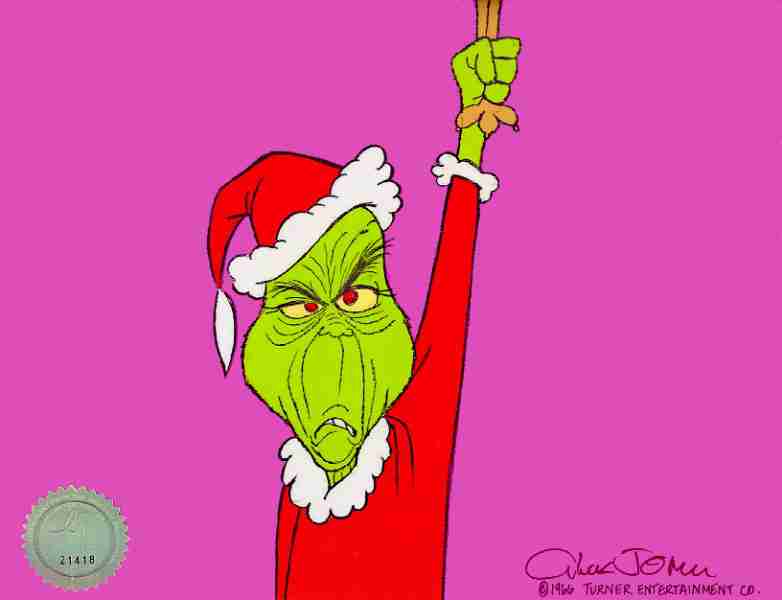 The Grinch doesn’t care if you have a headache

Sarah doesn’t know what she’s going to do, and was even thinking for a time about allowing a smart meter back on her home- at least for the time being.  “Winter comes in these mountains a month before everywhere else,” she says.

It’s hard to stomach the fact that in 2012 in the United States, men with guns from a private corporation and no warrant show up and threaten us for not accepting a hazardous device on our homes.  As a community we must come together and reject these Gestapo tactics.  Under the US Constitution, we have a right to be safe and sovereign in our homes.  If you turn a blind eye while the rights of your friends and neighbors are being violated, they may be at your house next.

We’ve been speaking with Sarah and she doesn’t want to give in to NVE.  She’s willing to rough it, to protect her health and to prove a point to the utility and to America- if that’s the way the utilities are going to behave, maybe we’re better off without them!

Sarah says “Some of us eat organic foods, buy our nice bottled waters, exercise daily, but where is the point in all of this wellness when we are forced to have a radiation box attached to our homes?”

Stop Smart Meters! has had enough of this utility abuse.  Today we are initiating a fund to 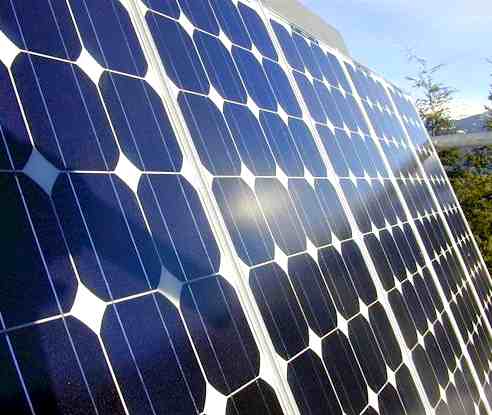 support Sarah’s energy needs and see her through the winter safely and without a smart meter, using renewable power.  We’ll be personally contributing to the fund and we urge you to do the same. When you opened your hearts and wallets for Santa Cruz County residents in December, together we prevailed and the movement grew stronger.

Please donate if you can- even a little- to Stop Smart Meters! Safe Power Fund to help Sarah afford some solar panels and other equipment and keep the smart meter off her home.  Together we can show it’s possible to take back your power safely and defy the utility.  No one has the right to force equipment that makes you sick onto your home.  Take a stand for Sarah and for everyone else out there standing up to the smart grid bullies.

Actions to Take for Sarah

1.  Please donate to get some solar panels for Sarah (indicate it’s a Safe Power Fund donation for Sarah).

2. You may contact Nevada Energy (Southern NV Energy) to express your disgust about how they are treating Sarah (and others with smart meter complaints, without allowing an opt-out). If you own stock in NVE – or any utility that aggressively forces smart meters on the public – we encourage you to rethink that. customerservice@nvenergy.com  (702) 402-5555

4. Report this outrage to your member of Congress or NV state legislator.

Thank you for supporting Sarah and others taking a stand!  -SSM!

54 Responses to Smart Meter or NO Power at All? Nevada Energy Sends Three Armed Men to Disconnect Power- Just for ‘Opting Out’