This Itron AMR “smart” meter deployed in Plumas County CA was measured emitting 20.5 microwatts per square centimeter one foot away. This level would be illegal in China, Russia, Poland and Switzerland, and has been associated with damage to DNA and effects on memory and learning. The rural electric co-operative PSREC is threatening us with disconnection of our electricity if we do not pay hundreds of dollars in extortionate ‘opt out’ fees to avoid one of these meters, even though I have a letter from my doctor confirming I have EHS.

This opinion piece was published today in the Portola Reporter.

Let’s Take Back Our Power & Wise Up to “Smart” Meters
By Josh Hart, Director StopSmartMeters.Org

My partner and I moved to Plumas County last summer from the Coastal Mountains.  She and I love it here, and are grateful for the beauty and  the people who have become our community.  I work full time from home as a technology writer and researcher, and we support our local economy by shopping in the area.  We save time and gas, and if it costs a little more, then that’s the price of a healthy local economy.  In other words, we’re the type of people the Rec & Tech campaign is trying to draw to Plumas County.

Now Plumas Sierra Rural Electric Cooperative (PSREC) is threatening to disconnect our electricity.  We have paid every penny of power we use on time, and in full.  So what’s going on?

Nearly 4 years ago, PG&E tried to install a “smart” meter on our home.  After an investigation, I realized there were serious problems with the technology. I started StopSmartMeters.Org in June 2010, to inform others about this threat to our health, privacy, and safety. The public remains overwhelmingly supportive of our ongoing campaign, with more than 57 cities, counties, and tribes throughout California having spoken out against the “smart grid.”  More than a dozen have even outlawed the devices.

One reason is privacy.  Intimate, private details of what goes on in your home are made available by the ‘smart’ meter to the utility and to whomever they choose to pass (or sell) this data.

Furthermore, hundreds of fires and electrical faults have led to property and appliance damage- even loss of life. The meters are cheaply manufactured in China and Mexico and are not UL certified.

Radiation from “smart” meters is hurting us, whether we can feel it or not.  In May, 2011 the World Health Organization (WHO) classified wireless microwave radiation- used for cell and cordless phones, wi-fi, cell towers, baby monitors, and “smart” meters- a Class 2B possible carcinogen (pdf). This is the same category as DDT and lead.  People are developing brain tumors on the same side of the head they use their cell phones.  “Smart” meters can expose people to 160 times the cumulative radiation of a cell phone (pdf).  Meanwhile, the FCC- who has a responsibility to set safe levels for human exposure- has been asleep at the regulatory wheel, allowing cell phones to be marketed to kids and wi-fi to be rolled out in elementary schools, even as European countries ban cell phone sales to children and remove wi-fi from their libraries. FCC guidelines recognize that it is not good for your health if you are heated like a hot dog in a microwave oven.  Ignored are the thousands of peer-reviewed studies identifying non-thermal effects of microwaves- including cancer, DNA damage, breaches of the blood-brain barrier, ADHD, headaches, tinnitus, insomnia, heart palpitations, and other ailments.

PG&E and PSREC’s “smart” meters both emit sharp bursts of microwave radiation every few seconds, 24/7 (Liberty Energy generally uses safer analog meters). PG&E admitted their meters emit up to 190,000 signals per day.  PSREC’s Itron meters emit constantly, even though the signal is only picked up by the meter reader once a month, wasting energy and unnecessarily exposing residents.  I’ve measured radiation levels of 20.5 microwatts per square centimeter from one of their meters in the Mohawk Valley (see above), a level found to damage DNA, and affect memory and learning.  These levels are so high they would be illegal in China, Poland, Russia, and Switzerland.  Yet there is no warning to keep your distance.

Such a warning would have helped me in 2011.  After measuring radiation from a bank of 80 PG&E “smart” meters at a complex in Berkeley, I began to get powerful stabs of pain in my temples often followed by waves of nausea, when near someone using a cell phone. 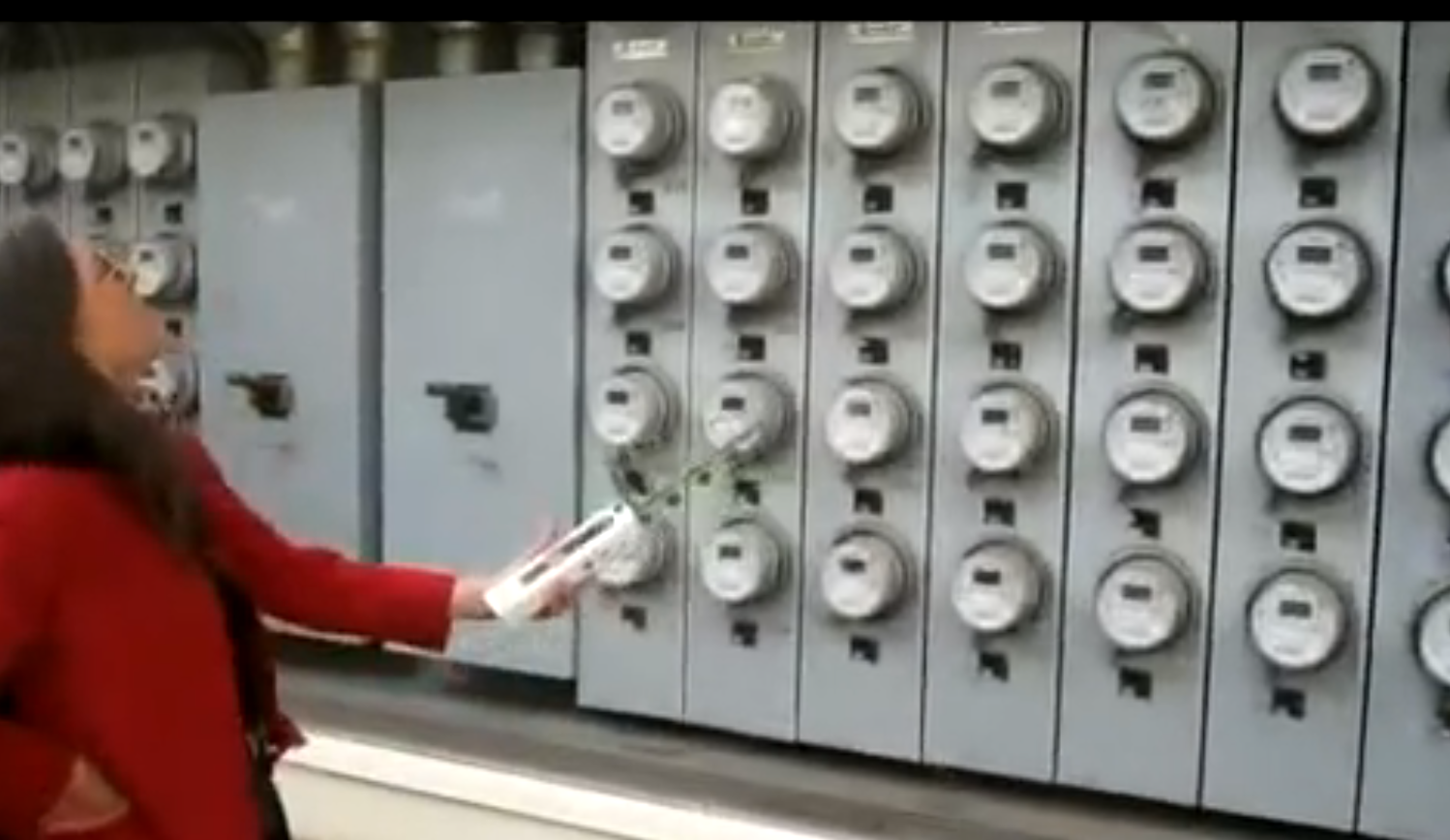 Stop Smart Meters! volunteers measuring the radiation from a bank of 80 PG&E “smart” meters in Berkeley, CA.  Exposures like these can lead to long term sensitivities as SSM! Director Josh Hart found out the hard way.

When my doctor later diagnosed me with electro-hyper-sensitivity,  I learned that I had been injured by ‘smart’ meter radiation in the same way a sunburn from solar radiation makes you ultra-sensitive to sunlight the next day.  Yet this “sunburn” has persisted- and it’s increasingly difficult to find places without wireless, as people are clamoring for cell phone coverage everywhere- even in the back country wilderness.  For those affected, it can be a nightmare you don’t wake up from.   And it’s often made worse by those who ridicule the injury as a “psychiatric problem” (it’s not).

Before we decided to move to Plumas, I called PSREC to explain my situation, and was assured there’d be no problem getting an analog meter. I never agreed to any fees, nor was asked to.

We moved to the Mohawk Valley in August last year and PSREC installed an analog meter right away.  They asked for a letter from my doctor regarding my diagnosis, which I provided. CA utility code section 453(b) states that “no public utility shall…require different rates or deposit amounts from a person because of…medical condition.”    Thus, I expected that my doctor’s letter would negate any charges related to the analog.

The PSREC board met in September, and decided to charge $141.60 for an analog meter (available online for $14) and $15/ month to pay the meter reader to walk from his truck to our meter.  We offered to self-read our analog and phone in the readings, but our offer was refused, though dozens- possibly hundreds- of PSREC customers continue to be billed this way at no extra charge.  Yet for me, with a documented medical condition, they demand that we pay or they will disconnect our electricity- even in the middle of winter.

This is not fair, reasonable, or legal.  Like PG&E’s ‘opt out’ fee in dispute at the CPUC, and which thousands are refusing to pay, PSREC’s charges are a kind of extortion.

They accuse us of forcing our neighbors to “subsidize” us with the added costs of meter reading, but cutting our power would cost the cooperative hundreds of dollars a year in lost revenue. Is the cost of reading our meter really the problem, or is it that they don’t like us informing the community about their hazardous equipment?

We should have a free choice about what kinds of technologies we prefer to use in our own homes.  I personally choose not to use any wireless- and that is my choice.  The “smart” meter crosses a line and violates our property and constitutional rights. No one should have to pay for the “privilege” of avoiding headaches and nausea- or even exposure to a Class 2B carcinogen- in their own home.

I encourage the Plumas County community to learn more about this issue at our website: StopSmartMeters.Org. Watch the documentary Take Back Your Power, available on DVD at the Quincy, Portola, and Greenville libraries, and at the Graeagle Outpost (also through our website).

In a world increasingly saturated with “electro-smog,” some of us get sick and show symptoms sooner than others.  I happen to be one of the early ones, like the canary sent down the coal mine.  PSREC, a local energy cooperative, created in the not-too-distant past, by and to serve local people, must remember the importance of health and safety even when- especially when- it’s inconvenient.

Josh Hart is a resident of Plumas County and is Director of Stop Smart Meters! For more information, go to the website at StopSmartMeters.Org  or write to POB 682 Portola, CA 96122 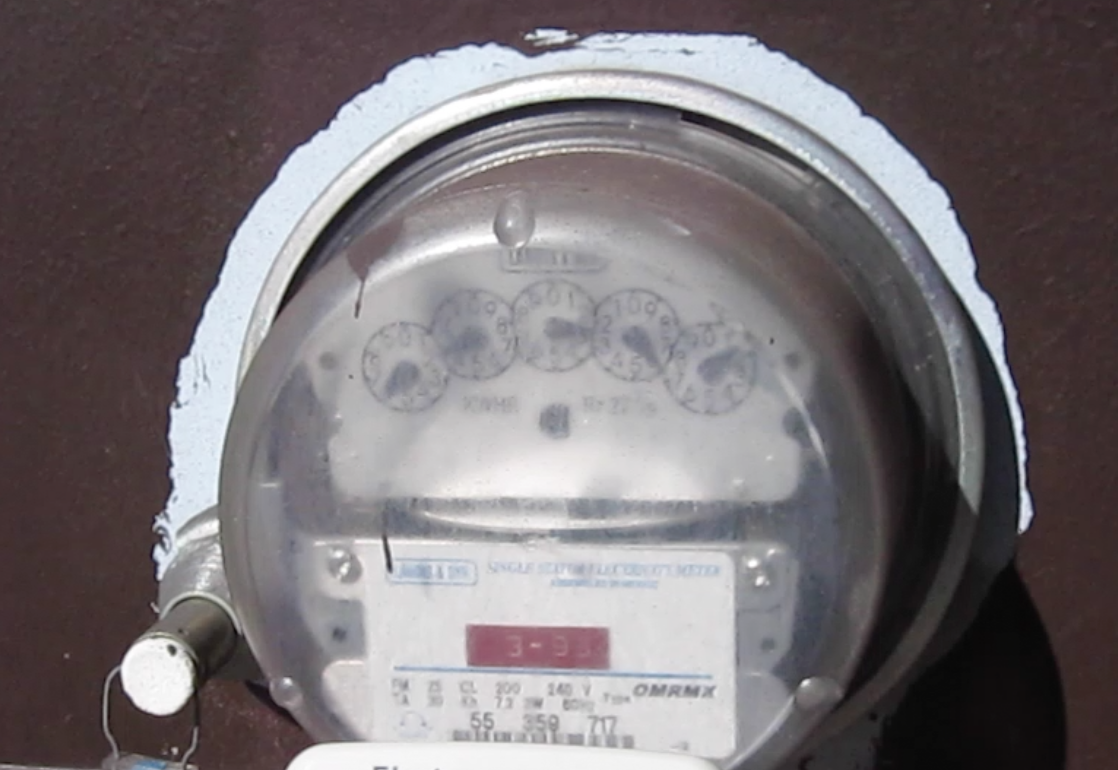 This Landis & Gyr meter used by PSREC looks like an analog but “wakes up” and transmits the electrical readings using microwave signals when it receives a signal from a meter reader once a month. Because it has electronic components, and can add “dirty electricity” onto your home’s wiring, this is also considered a “smart” meter 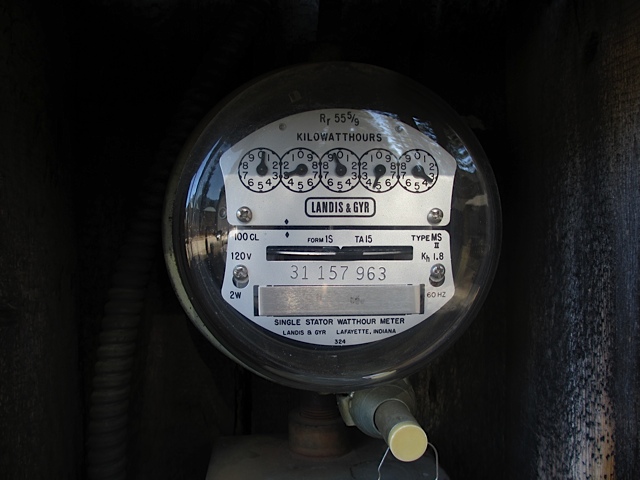 This is a true electro-mechanical analog electric meter that does not contain electronic components. It’s what everyone should insist on without compromise and without fees.