Could a Smart Meter Have Ignited the San Bruno Inferno? 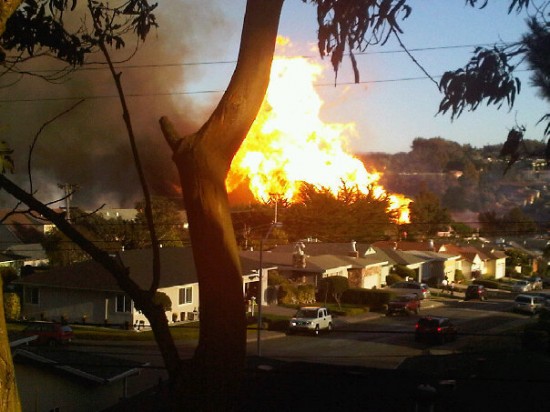 Now we don’t want to jump to any conclusions, but the signs are beginning to point to the possibility that a ‘smart’ meter may have played a role in the fire and explosion that likely killed more than a dozen people, injured dozens more and destroyed an entire neighborhood.   The Chronicle reported on this possible connection in their article this morning, and the web has been atwitter with speculation since last Thursday.

At the very least, PG&E’s chickens are coming home to roost.   The horrific repercussions are coming to light of a corporation that cares more about profit than public safety and their lapdog the CPUC who have let them get away with it all.   PG&E Workers are coming forward to testify about upper management ignoring safety procedures in an attempt to maximize profit. For this and many other reasons, major news outlets are calling for PG&E CEO Peter Darbee to step down.

Stop Smart Meters! believes that the PG&E monster needs to be dismantled, and regulated as a public agency that is accountable to the citizens, with health and safety coming first.  Eventually the job of providing electricity and gas must be devolved to local governments, and then to neighborhoods and individual households in what people are calling a decentralized ‘wise grid.’  This prospect unnerved PG&E enough  to fund the failed Prop. 16 attack earlier this year.

But back to the possible connection between San Bruno’s smart meters and the devastating explosion.  Let’s take a look at the evidence:

1) San Bruno has been fully installed with smart meters as of April of this year according to PG&E’s schedule.

2) Smart meters have been implicated in a number of house fires since they were rolled out.  They have also disabled or otherwise interfered with AFCI’s and GFCI’s- devices designed to prevent electrical shorts and fires.

3) PG&E tells customers not to use a cell phone when there is a gas leak, but the ‘smart’ gas meters are essentially the same thing- a cell phone with a battery that could generate a spark setting off a devastating explosion like we saw in San Bruno.  That is also why you see signs not to talk on your cell phone at the gas station.  In fact the group Californians for Renewable Energy alleges in a complaint filed with the FCC that a spark from a gas ‘smart’ meter could have traveled up the gas line and ignited the deadly explosion. Is it wise to have a spark generating device right on your gas meter?   Of course not.  Is it possible that this didn’t occur to PG&E before they installed these meters? Given their neglect of everything else to do with health and safety, we really wouldn’t put it past them.

4) Even if smart meters were not directly responsible for the San Bruno blaze, there is still value in having a professional meter reader check things out every once in a while and sniff for gas leaks.  If meter readers were still going house to house in San Bruno, could this explosion have been prevented?  We will never know, but there is sure speculation out there.

Whatever the ultimate cause of the San Bruno blaze, one thing is for certain.  The ‘smart’ meter debacle is blowing up in PG&E’s face on a number of fronts, as part of a legacy of reckless disregard for health and safety.  What with Prop. 16, the ‘smart’ meter rebellion, and now an entire neighborhood having been destroyed, state elected officials need to get this beast back under control or be thrown out in November by a huge citizen and ratepayer backlash.

PG&E is a utility that is meant to serve the public.  When it gets to be the other way around, we need to take action politically and if necessary, directly to protect our lives and communities.

This entry was posted in CPUC, Democracy, PG&E. Bookmark the permalink.

6 Responses to Could a Smart Meter Have Ignited the San Bruno Inferno?