Opt Out is Not Enough 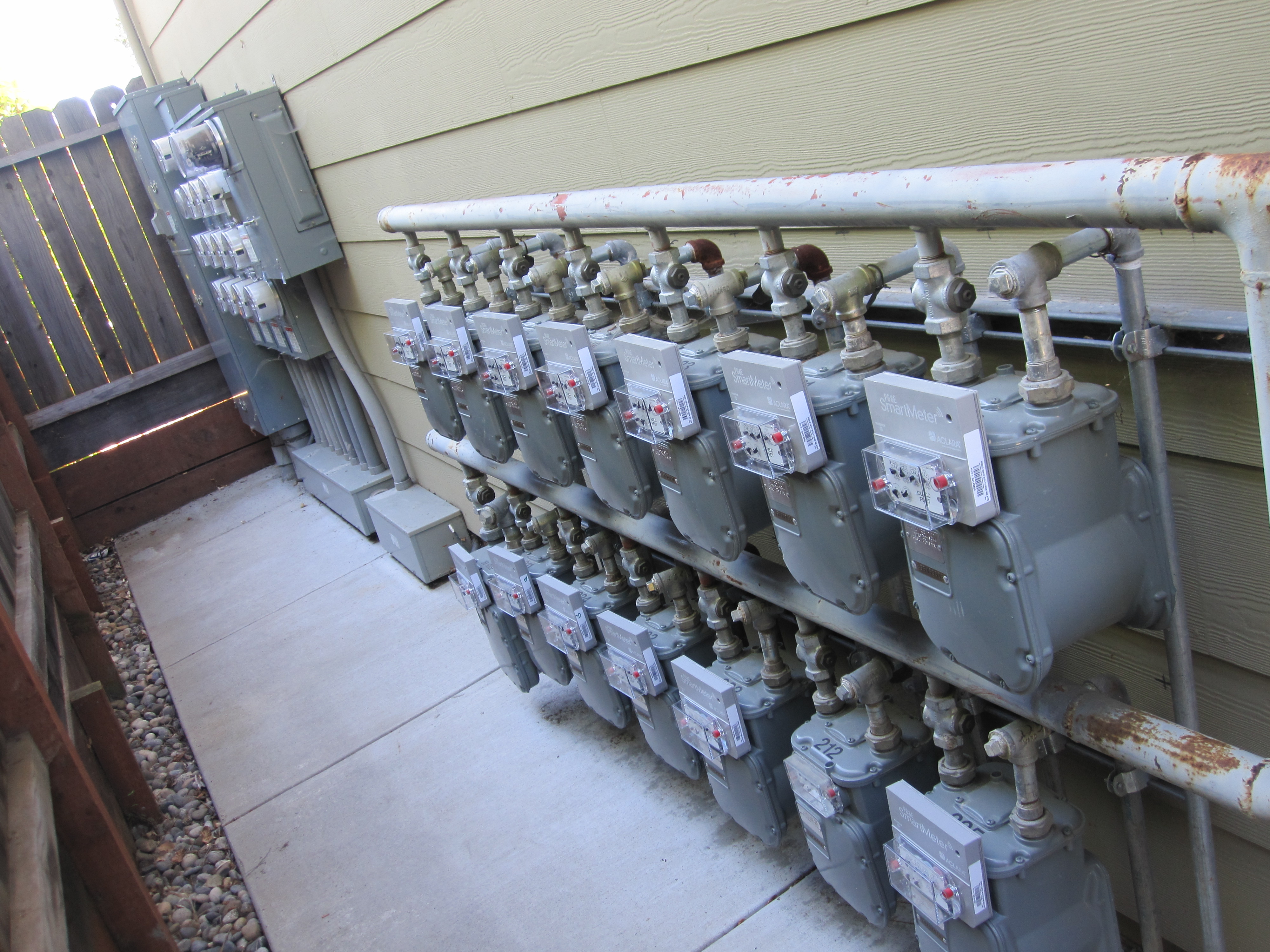 Having an individual opt out is especially pointless for apartment dwellers who face exposure from banks of meters like this one in Scotts Valley- can you spot the one resident who had advance warning and refused installation?

One of the worst things about the ‘smart’ meter program is that it is mandatory- the new radiating meters are being forced on us whether we like it or not.  There is currently no opting out for individuals, businesses, or entire communities- even in cases of severe health risk, according to the CPUC and PG&E.  They have even insinuated lately that they will force this meter on to your home- if necessary- escorted by armed guards.    Sounds a tad Orwellian to us.

Well, on Friday, after being battered by bad press for weeks, there were reports in the Bay Area dailies that PG&E is considering a ‘smart meter compromise.’   Something, PG&E CEO Peter Darbee stated (in his reassuring corporate voice) ‘that everybody can live with.’  Has the sleeping giant come to its senses?  Has the devil of Hexavalent Chromium and San Bruno Fiery Death decided that radiating the entire population may be bad for their corporate earnings, if not their conscience? Have they decided to hard wire their meters?  I mean it’s not like they really needed wireless, mobile technology in the first place as the meters are ATTACHED TO YOUR HOUSE.

What is such a ‘compromise’ likely to look like?  PG&E may offer some sort of individual opt out- perhaps requiring a doctor’s note so that most people won’t go to the trouble.   Yet this would force the company and the CPUC to admit that electrohypersensitivity is real phenomenon that people are suffering, something that they have been in deep pathological denial about.  Something that if the general public became aware of- could blow open the whole EMF health  scandal and spell big financial trouble for telecom and utility companies.

Even Michael Peevey, president of the utilities commission, insinuated that everyone is just making it up.  In the Chron, he “suggested to PG&E executives that they find some way to address the concerns of people who SAY they suffer from ‘electrosensitivity.'”

those people they're all just SAYING they suffer from electrosensitivity, but really they're just pretending, just to mess with my smart meter pet project that's going to leave me the legacy of being the guy who built the smart grid......Wahhhhh.

The truth is that opting out is not a “compromise we can all live with.”   For an electrosensitive individual, living exposed to your neighbors’ meters is just as bad as living with your own.  Bathing our communities in even more microwave radiation than they suffer from already, with a few ‘opt outs’ just will not cut it.  It’s not only humans that are suffering.   Nature is paying the price as well.  This week, PC World reported that Wi-Fi (that uses the same frequencies as the ‘smart’ meter) has been sickening trees.

What about entire communities opting out?   That seems like a more reasonable solution, right?   Wrong.   Bottom line, if there are health risks to EMF radiation (and there are!) then no community in California should have to suffer them, whether they have citizens and local governments who have read the latest scientific reports or not.

The only ‘compromise’ we will accept is if the CPUC immediately halts further installations in the state pending open, honest public health hearings, disables the wireless components on the already installed meters, hard wires any remote connections, and ensures strict privacy standards.  Then, they should refund the rate increase that the CPUC originally granted to pay for the meters, and come sobbing and pleading for our forgiveness for polluting the state, blowing up families in San Bruno to make a few more bucks, recklessly endangering the health of people and nature throughout California by inflicting unprecedented levels of EMF, attempting to manipulate the democratic process to trick us into strengthening their monopoly, and then having their senior officials falsify their identities trying to sneak into private discussion forums and then claiming it was some kind of public outreach exercise.

Darbee and the rest of those lying corporate weasels should come to the California public, begging us to forgive their arrogance and greed, their sinister lying and deceit.

And remembering those who have died or been hurt by PG&E’s corporate greed, we will bid them adieu as we reclaim control over our power, implementing ‘Community Choice Aggregation‘ (CCA) programs throughout the state and sending PG&E packing for good.

7 Responses to Opt Out is Not Enough