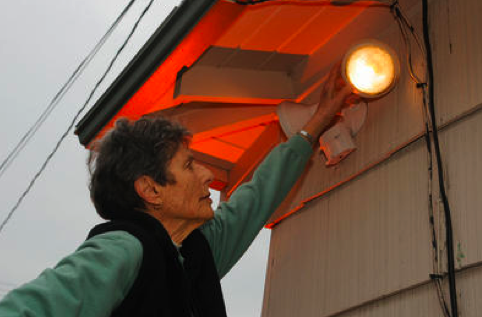 It was reported in the Marin IJ Tuesday that a Corte Madera resident- Jane Levinsohn- complained to PG&E that after a ‘smart’ meter was installed on her home, her outdoor motion sensor lights were switching on and off for no reason in the middle of the night.   PG&E came out and tried using a ‘lower power’ version of the wireless meter, but the interference was still a problem.  They eventually replaced it with the old analog meter.  This is just one of hundreds- perhaps thousands of cases of electronic interference reported after a wireless meter is installed.

That’s just electronic interference.  What about human interference?  Despite thousands of requests to remove the meters because people are getting sick, as we and others have been documenting, PG&E- backed by the CPUC, has turned a deaf ear to these complaints.  We wonder what exactly they think of the thousands of people like you and me who are reporting headaches, sleeplessness, ringing in the ears, etc.

Do they think we’re crazy?

Do they think we’re just making it up to make their lives difficult?

The  viewpoint that people who complain about health effects of wireless technology are just crazy- part of the ‘tinfoil hat brigade’ or are just making it up- that perspective is simply no longer credible.

Why?  Because there is now peer-reviewed scientific evidence that certain people are indeed sensitive to microwave radiation at levels far below where the FCC sets its safety limits.  Does this really come as a surprise though?  Humans and all other living things send and receive electromagnetic impulses on a cellular level.   The surprising thing would be if wireless signals did not interefere with human biology.

It’s certainly a sad day when machines get priority over human beings.  But that is exactly what we are seeing unfold before our eyes.   PG&E, the other utilities, and the telecommunications industry as a whole are burying their collective heads in the sand, and trying to bury evidence that people are getting hurt.

To admit that people, plants, and animals are being wounded by wireless technology means that we need to question this blind rush to a wireless future.

With the mandatory wireless smart meter program, they’ve pushed it too far.  And when Republican grandmothers start risking arrest,  I think they are beginning to realize it.

This entry was posted in interference, PG&E. Bookmark the permalink.