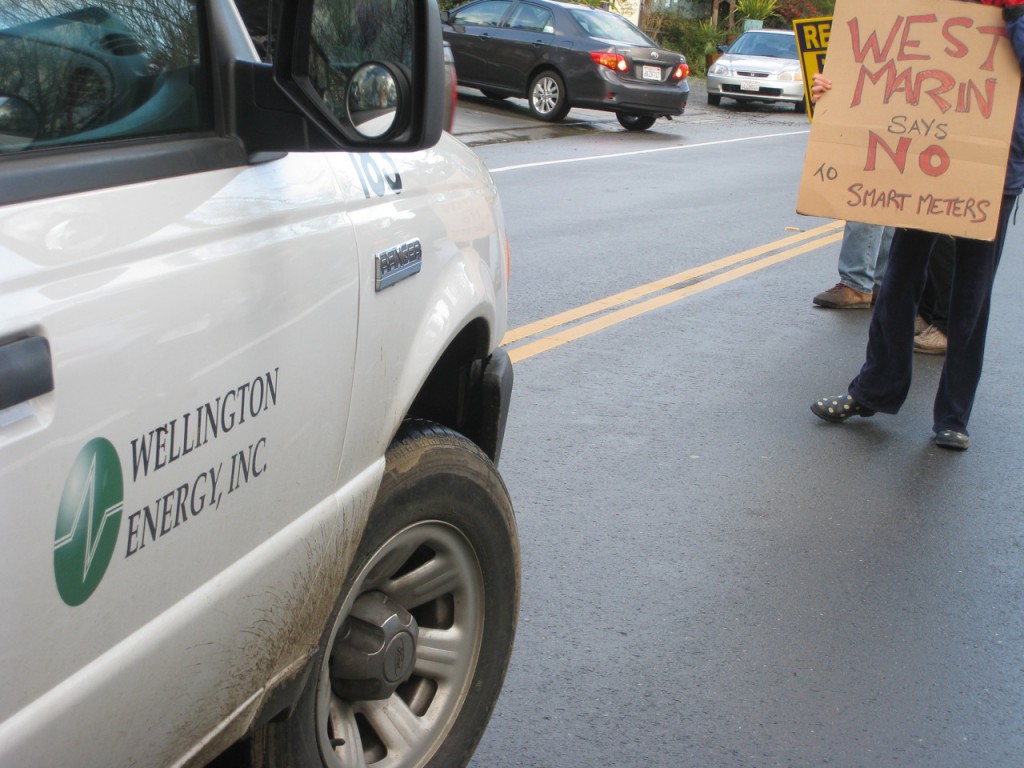 Thank you to Howard Glasser and all you tuned in, royally pissed off people in Lake County and elsewhere who are somehow staying sane and centered amidst the sheer insanity of the ‘smart’ meter rollout.

There’s legal and there’s crossing the line. For those who at least try to live by the Golden Rule, it’s not about having grounds to sue. It’s about doing the right thing.

PG&E and the CPUC had an opportunity to do the right thing but instead, blatantly violated consumer rights, breached public trust, committed inappropriate and unethical acts and abused their power.

This assault was launched suddenly and with little warning before anyone had a chance to realize what was happening. The attack was organized and premeditated while we were unarmed and powerless and our local representatives rendered defenseless in its efforts to protect us. This undermined our system of government.

When cities and counties passed moratoriums to ban SmartMeters in reaction to overwhelming public disapproval, the CPUC pushed aside public concerns and yielded to the industry they are charged with regulating. The will of the people was ignored and PG&E went on with its business.

They swarmed in like killer bees and took over our territory as if they owned it. They deployed like a covert military operation and treated us like the enemy. Some citizens in desperation tried to form blockades to stop the installation trucks. This made us feel like strangers in our own country. We are not the enemy.

When we objected to their egregious and aggressive behavior and invasive tactics, they placated us with public relations and marketing spin to assuage and pacify us

while ramping up their relentless deployment.

They misled and misinformed the media with concocted science bought and paid for by industry insiders while ignoring the preponderance of legitimate, independent scientific evidence and medical research pointing to the health hazards posed by EMF radiation.

Thousands of customer complaints put pressure on PG&E to respond. California Assemblyman Jared Huffman introduced a bill called AB 37, legislation directing the CPUC to suspend Smart Meter deployment until a satisfactory wired equivalent could be provided “giving consumers reasonable choices for devices that are installed at their homes.” The CPUC asked PG&E to come out with an opt-out plan for its customers.

Customers led to believe that they’d be given an opt-out other than wireless were shocked when presented with hefty new fees which PG&E and its attorneys justified as necessary recovery costs to have the radios embedded in its wireless SmartMeters deactivated. PG&E asked for $84 million to turn the radios off. That’s a scam.

While the public was put on hold pending CPUC’s approval of this so-called opt-out plan, PG&E ramped up its installation schedule so that they would be finished by the time the opt-out was available making the process moot. That’s a sham.

PG&E never had any intention of interrupting its rollout. It was funded to the tune of $2.2 billion for the program, the largest of its kind in North America (10 million installations) and Wellington Energy’s share is more than $300 million. Its goal is have a SmartMeter on every home and business in its 70,000-square-mile service territory and they’re closing in on it.

To achieve the objectives, PG&E offered its installers a bonus of $25 per meter for every meter more than 35 they could install in an eight-hour shift. This commission-weighted pay plan rewarded speed over proficiency, encouraged haste and led to cutting corners where public safety is concerned. Faulty installations were linked to fires statewide.

Confronted by customers who did not want a SmartMeter installed, Wellington worked surreptitiously approaching homes in a stealth manner to get in and out before anyone noticed. Customers taken by surprise pursued installers demanding removal of the wireless meters but their requests were denied. The elderly and disabled, some of whom rely on essential at-home medical equipment or life support devices, were put at even further disadvantage. Installers would have no way of knowing about these special needs unless they first knocked on the door but that would have blown their cover.

It’s clear lines were crossed here with actions that most people consider deplorable. The CPUC exhibited conduct unbefitting a state commission chartered with operating in the public interest.

PG&E and the CPUC are not above the law. The California Public Utilities Commission’s website states: “The CPUC serves the public interest by protecting consumers and ensuring the provision of safe, reliable utility service and infrastructure at reasonable rates with a commitment to environmental enhancement and a healthy California economy.” What happened?

The CPUC along with PG&E and its installers should be held fully accountable to the people of California.