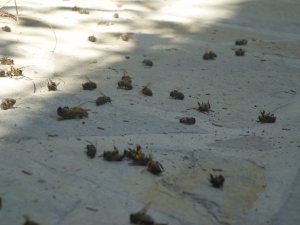 “When I got home I saw my own walkway, which is on the other side of my neighbor’s smart meter, had a new pile of  dead bees.  This, dead bees in our garden, is a new occurrence.  Sometimes they aren’t yet “dead,” but I see them walking on the ground, not able to fly or get back to their hive.”

Read more about this account here.  More reports of bee harm, and links to scientific studies of ecological damage from wireless technology at Kauai’s Stop KIUC site.While key pollinators (not to mention our children) are very likely being damaged in unknown ways by pulsed smart meter microwave radiation, the Environmental Defense Fund is all abuzz defending its pet project — the Smart Meter.

Never mind all that because EDF’s board of directors includes venture capitalists who are hoping to make a killing on a threatened IPO of Silver Spring Networks, which manufactures communication systems for smart meter mesh networks and is based in Redwood City, CA.  And of course nothing is more important than rich people making more cash.  Particularly the environment.  Yet the storm clouds of public resistance to the smart grid are gathering and threaten to rain out their parade.  We’ll see if this alleged IPO will weather- or succumb to- the “Facebook flu.”

EDF’s board includes Ann Doerr, the wife of John Doerr, whose VC firm Kleiner Perkins Caufield & Byers is heavily invested in Silver Spring.  By following the money, it’s a little easier to understand why environmental groups like EDF seem to be throwing environmental caution- not to mention reason- to the wind despite the clear scientific evidence of environmental and health damage from wireless tech.

Whatever’s going on here, one thing is for sure.  Corporate environmental groups like EDF are after the wrong kind of green.  And the bees are not happy.