Stop Smart Meters….But What Do We Want to Start?

A grassroots upwelling of public outrage over forced smart grid deployments spilled onto the streets in over 35 communities around North America yesterday, showing that our movement is growing bigger every day, and that utilities and governments better take heed- we’re not going to accept these violations lying down.  Check out all the local coverage- including firsthand reports from dozens of communities, photos and video at the Action Day website.

Meanwhile, we’ve posted above the new trailer which was released today for Take Back Your Power, the upcoming documentary investigating the truth about smart meters from BC filmmaker Josh Del Sol and his powerhouse team.  Check out their new website and direct some financial support their way so they can wrap up post production for what promises to be a real show stopping film for the smart grid.

Be sure also to check out the Day of Action press release, the recent release from Joel Moskowitz at the UC Berkeley School of Public Health about the health threat posed by smart meters, and the Ontario Fire Marshal’s report on smart meter fires.  These are key pieces of evidence that should be put to use in courtrooms, public meetings, and as part of media analyses of this evolving issue.

Yesterday, the public spoke out loud and clear- we demand a halt to the smart meter debacle.  But what do we want to happen with energy and utility policy?   While a grassroots movement like this includes important differences, some common themes are emerging from across the political spectrum.  These include:

To the extent that the smart meter deployment is a crisis we are facing together, it is also an opportunity to question the way our utilities are set up, to question where our power comes from, and how it is transmitted, to challenge the erosion of our civil liberties, and to stand up for a safe, affordable, advanced telecommunications and energy system based on fiber optic NOT wireless.

We have news for the utility industry- we’re not going away and we already have the power in our hands- it’s just a matter of time before enough of us wake up and realize it! 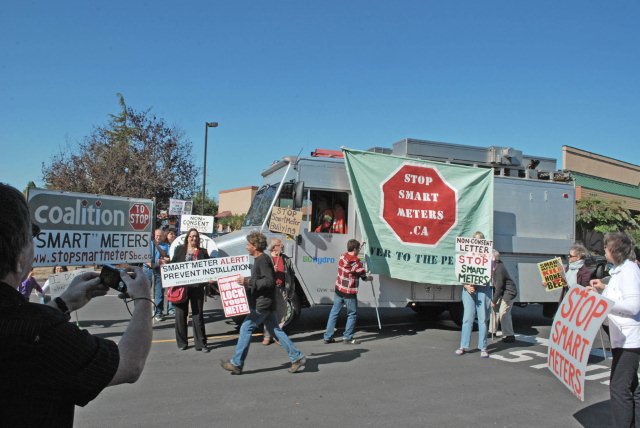 Victoria BC smart meter opponents take it to the streets…

4 Responses to Stop Smart Meters….But What Do We Want to Start?