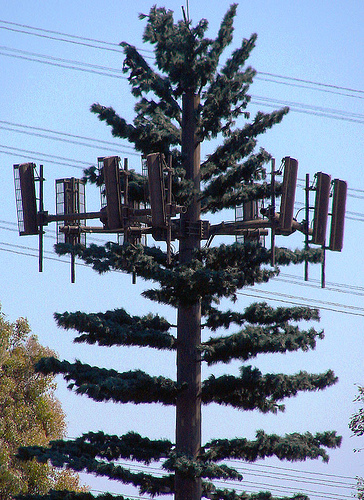 A plan by Verizon Corp. to install a 4G cell tower less than 700 feet from an elementary school in downtown Boulder Creek has been withdrawn, thanks to the dozens of people who showed up at the county building in Santa Cruz, CA on Friday morning and dozens more who passed out fliers and spoke to the landowner to express their opposition.

Moral of the story? When a community unites, we can stop inappropriate wireless installations that devastate neighborhoods, forced by corporate thugs.

The Sentinel reports that:

“Federal law restricts local governments from making decisions about cell towers on the basis of health risks, since there is no scientific consensus on radio frequency emissions posing a threat.”

This is not accurate reporting.  What would be more accurate would be the following:

“Federal law restricts local governments from making decisions about cell towers on private land* on the basis of health risks, since the federal government is owned by the corporations who write federal legislation, and who realized that if locals were allowed to make decisions on wireless equipment based on the increasing body of peer-reviewed evidence of health threats posed by cell towers, this would interfere with their profiteering from a national wireless network.”

And since when is Facebook the route through which community democratic decisions are made?

“Several Boulder Creek residents have said they want better service in the valley. The Sentinel asked people on Facebook about the possible tower, and the majority of those who commented said they were in favor of the project.”

One thing is for sure.  In some areas at least (jn this case the backyard of Silicon Valley), the cat is out of the bag about wireless health harm and there is no going back.

* Local governments can choose to reject cell towers for whatever reason they want including health and the environment if the land in question is owned by that local government.