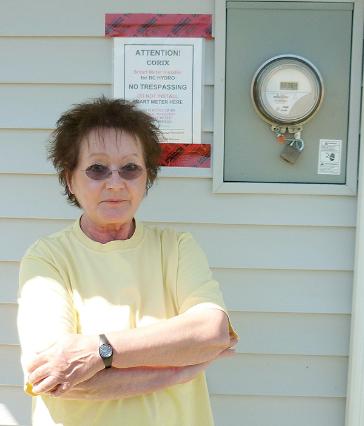 Nan Latchford wants BC Hydro to keep “hands off” from her analog meter. She and her husband have joined a class-action lawsuit. Kristen Douglas/The Mirror

A Canadian class action lawsuit started by Nomi Davis, a yoga teacher from British Columbia’s Saltspring Island is gaining momentum, and publicity.  An article in the Vancouver Sun recently included this quote from Una St. Clair of the Center for Safe Technology:

“If I choose to avoid chemical fertilizers on my property because I think they’re unhealthy, that is my choice. The same goes with my exposure to smart meter radiation. In a free and pluralistic society, a possible toxin cannot be forced down anyone’s throat — or forced onto one’s property.”

But are we still living in a free and pluralistic society?  That is the question Una’s statement begs the reader, and one perhaps Canadian courts will decide.

The Campbell River BC Mirror reports:

According to a video Davis posted on Youtube, she was promised by a representative from Corix, which has been installing the new meters, that her meter would have the radio switched off.

But immediately after the meter was installed, a friend was able to measure electromagnetic frequencies coming from the smart meter every five seconds – some from 40 feet away.The Latchfords signed onto Davis’ lawsuit on April 30, but the papers were just filed to B.C. Supreme Court on July 25.

The suit demands that BC Hydro remove unwanted smart meters, that BC Hydro stop installing the devices without the consent of the home owner, that BC Hydro be prohibited from declining to sell power to properties who don’t want the meters, and that the power corporation be restrained from accepting payments in exchange for not having a smart meter.

Nan Latchford said the lawsuit is about rights and freedom.“We feel our civil rights are being ignored by not giving us a choice and not giving us the freedom to have our homes free of an intrusion of a radiating device that BC Hydro wants to put on our homes and keep track of every little step we take by recording our power usage in a manner that you can detect whether we’re home, whether we’re not at home, whether we’re on vacation and if we are at home, what we do at home,” Latchford said.”

The courtrooms are beginning to buzz with people’s smart meter wireless injury claims against the utilities. People have even had luck suing in small claims court (pdf). When yoga teachers start suing the bastards, you better take notice.  The truth is on our side.