After holding educational forums, protesting, and lobbying for three years for stronger local telecom laws, Berkeleyans are engaging in non-violent direct action to stop 4th and 5th Generation cell antennas that are being rolled out throughout Berkeley. An all-night vigil near Berkeley Natural Grocery began at 12:30 AM on October 28, but antennas were installed later that day on the corner of Nielsen as well as at Monterey Market.

Officer Shedowdy has a mean attitude. Given how he treated this female elder who was arrested for a non-violent act of conscience, I fear for young men of color who may be wise to keep quiet rather than ask his colleague, as I did twice, “Please don’t leave me alone with this guy.” I was left alone with him in the police garage prior to entering the jail. He should not have been allowed to reach in and check, and then double check, my four pants pockets. A female officer should have done that with a witness present.

Earlier, I had dared tell him to stop twisting my wrist when he handcuffed me behind my back at the Gilman/Nielsen intersection where we’d been trying to prevent an antenna installation on a telephone pole. Pain compliance was unnecessary. He seemed to enjoy it. After handcuffing me, he took my right arm, another cop took my left arm, and they walked me to the patrol wagon. He pulled me hard to the right while the cop on my left held on. Good thing I can tolerate a strong yoga stretch! I got cold feet so, before they put me in the wagon, I said I’d leave the vigil if they remove the cuffs. He said, “That train left the station, lady. You’re goin to jail!” They got me into the back of the wagon and slammed the door, leaving me in total darkness. 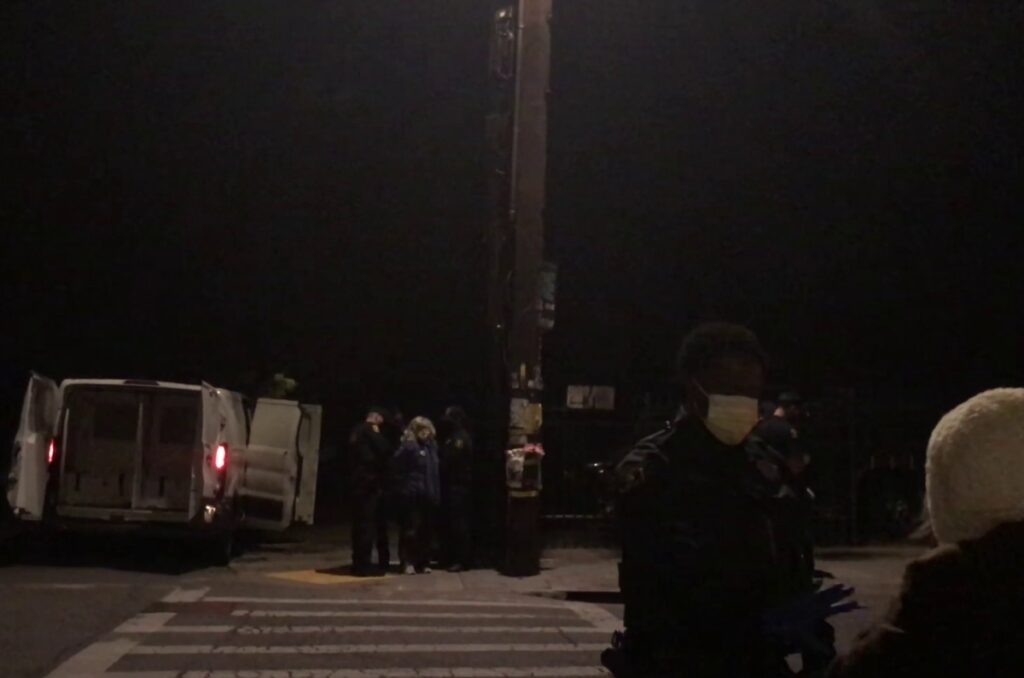 They must have taken a circuitous route because the ride took so long that, even though I knew Berkeley’s twenty cells would likely not be full, and I had no medical conditions, I feared they were taking me to Santa Rita. I didn’t notice that he’d strapped a seat belt on me and I had visions of meeting Freddie Gray’s tragic fate. My glasses had slipped down my nose; my mask had slipped into my mouth. Hair was in my eyes; and my forehead itched. So I wriggled out of one cuff, which enraged Shedowdy. He put it back on so tightly that it blocked blood flow and left deep purple marks in my flesh. I recalled that they’d murdered Kayla Moore. Eventually I mustered the courage to mention that I’m a pianist and that I know someone whose tight handcuff caused permanent nerve damage. He loosened it.

Other cops treated me in a professional manner, except the one who fingerprinted me. Surely it need not have taken over an hour. I chatted cheerfully to calm myself and to charm them into being humane. He knew I needed a restroom, so was this a passive aggressive way of decimating my dignity, or is he touch deprived and liked holding my hand? Prints were taken of all ten digits and both palms over and over again. “What next? Want to do my toes, too? I’m well trained in patience. One of my first jobs was in a nursing home. Waitressing required more patience. Being a dental hygienist required even more. Hey, I had many famous patients! I met Grace Kelly, the epitome of grace.” He said he just needed my right middle finger again. I flipped it, saying, “Sorry, couldn’t resist,” and we all laughed, but then he did that whole hand again. Finally, he put me in the cell, tired of my banter, or perhaps because I said I considered this to be a mild form of torture.

By then I didn’t care that the toilet in the cell had no privacy. The cot was comfy enough to cop a nap, much needed since our vigil had begun at midnight. I put my Covid mask over my eyes because I couldn’t turn off the bright fluorescent light.

Providing a toothbrush was nice, but it’s impossible to clean teeth with that ridiculous finger cap brush. If I’d been incarcerated more than a few hours, I’d have gotten a migraine from the strong disinfectant smell. Some inmates may be so hungry that they’d eat a genetically modified taco, microwaved in a plastic wrapper, but jails shouldn’t serve pork. Islamophobia? I’m vegetarian. I hesitate to complain, given the police brutality that Black people routinely endure. I want to use my privilege to help others.

People who are EMF (electromagnetic field) sensitive also often have multiple chemical sensitivities. They would have suffered terribly in the Berkeley jail. I was there for them, four of them having confided to me that life won’t be worth living if 5G is deployed as Big Telecom plans, with antennas on every block and no escape from involuntary exposure 24/7, causing myriad health problems as proven by 1,000+ peer-reviewed studies. It even kills insects, and it’s an energy glutton, a big deal in Berkeley. Ugly antennas also lower property values, destroy privacy, and seriously increase fire risk. NASA scientists predict 5G will decrease weather prediction accuracy by 30%. We’ve just had high wind predictions that warranted prepping for fire evacuation!

For over three years we’ve been lobbying for stronger local telecom laws. We formed a non-profit, WIreless Radiation Education & Defense (WiRED), held educational forums and film screenings, pamphleted, created swag, waited hours to give one minute public comments at many a Council meeting, and protested. We raised funds and hired attorney, Ariel Strauss, to craft protective local laws as in other cities like Encinitas, which work continues.

Dozens of neighbors near Monterey Market and Berkeley Natural Grocery signed affidavits attesting that they never received the required notices that AT&T claims were sent. We got an attorney to send the city two Cease and Desist letters based on that and other violations of the law (lack of NEPA checklist environmental review.) We were ignored. The City Manager could have revoked telecom permits that expired in August. Instead, she extended them into 2021 and got the local police to protect a multibillion dollar corporation instead of the community. AT&T will reimburse the city for the cost of having cops violate the city’s laws by facilitating illegal corporate activities and violating our rights to defend our neighborhoods. Shouldn’t local cops be cruising to interrupt and prevent crimes, rather than harassing protesters on behalf of AT&T?

Now that the roll out has begun, contractors erect tall fences in the middle of the night, violating Berkeley’s noise ordinance, to keep us from occupying the public sidewalk around poles. We’re protecting our public commons and children who are more vulnerable. 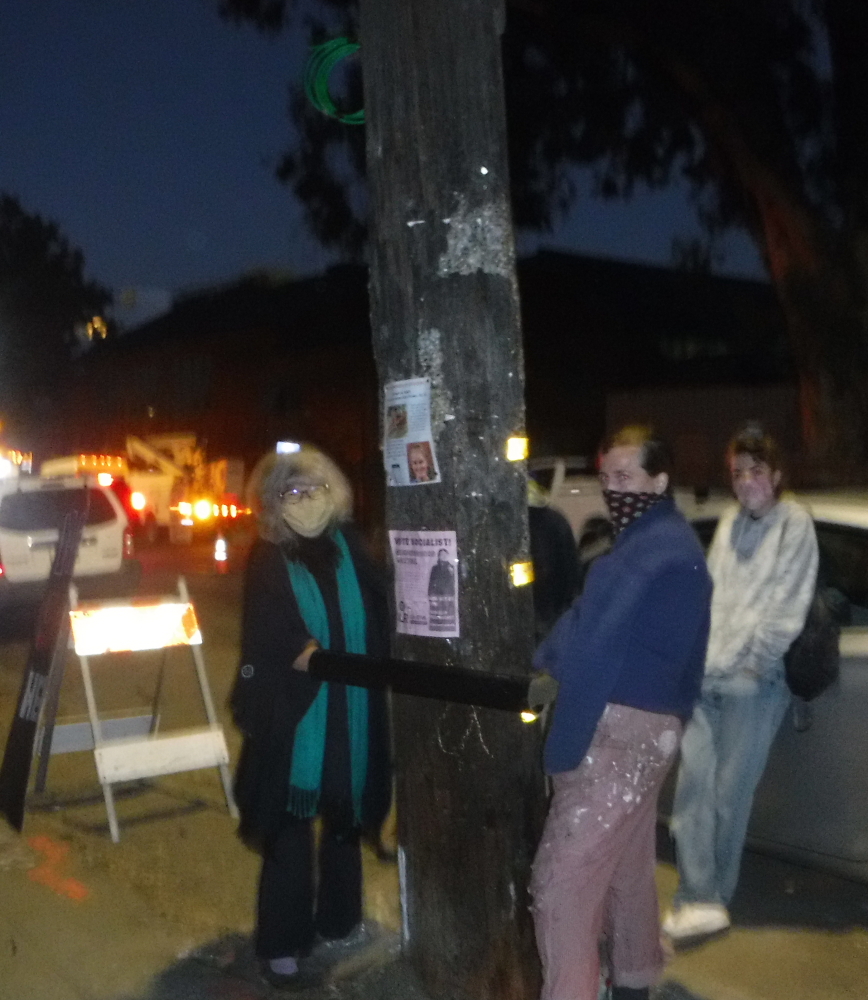 After being locked around a pole at People’s Park for four hours on October 20, on our way home Sierra Murphree saw a gap in the fence for an antenna on MLK near Berkeley High School across from Washington Elementary. Pretty Jessica Wall distracted the contractors while Sierra, Cynthia Papermaster, and I ran in and plopped down by the pole, linking elbows and telling the startled workers, “Party time!” Cops were called, pried us apart, and roughly dragged us out. 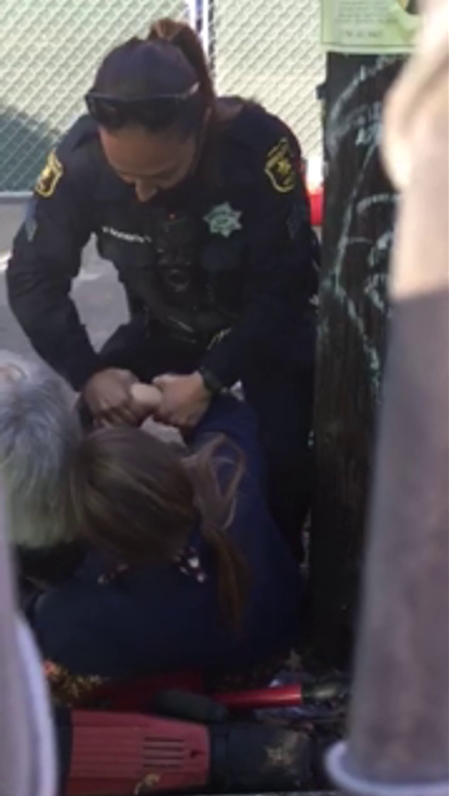 We delayed but could not stop an antenna at the School District building on Bonar where Oxford and other school children will study. Several preschools are nearby. After a trench in the gutter is bored to the transformer, and the “smart” meter installed, that one will go live. Antennas are planned across from Crowden and Jefferson schools on Rose, on Dwight across from Herrick Medical Center, on Fourth Street, and on the roofs of apartment buildings including HUD housing at Cedar/MLK. Some are 4G, but 5G works with 4G, so we’ll still be hit with microwave radiation in addition to the new millimeter waves.

Mayoral candidate Aidan Hill attended the People’s Park pole protection, as did Copwatch. Candidate Wayne Hsiung sent a supportive representative to the all night vigil on October 28. Mayor Jesse Arreguin wrote later that day, “I have reached out to the City Manager to find out what happened and asked that any charges be dropped against those engaged in civil disobedience opposing the antenna installation.” Councilmember Cheryl Davila has been extremely helpful. Councilmembers Kate Harrison, Ben Bartlett, and Susan Wengraf have also been helpful over the last couple of years. 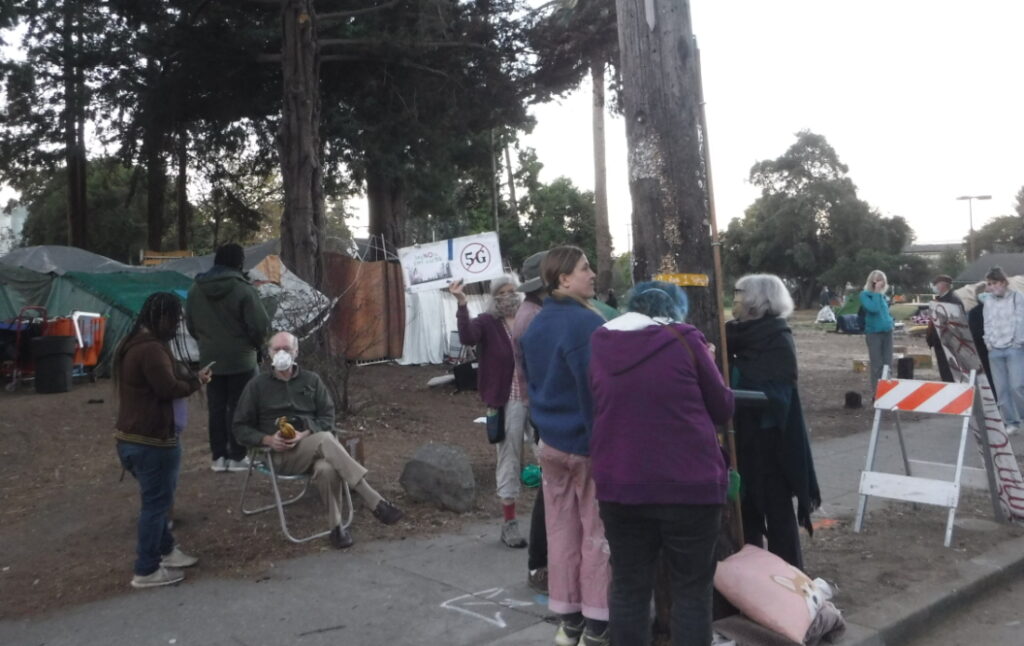 I’m petite. Sgt. Rodrigues could have ordered a couple of her henchmen to drag me across the street on October 28 instead of arresting me. Use of force has sometimes been excessive. In a dream, she turned into a leopard and attacked me as I tried to morph into a cougar. She growled and drooled on my face. As I was losing our strenuous wrestling match, I awoke with a start. Daniel Borgstrom reassured those of us who are traumatized by cops, saying we might forget all about it when 5G is rolled out everywhere because EMF/RF radiation impedes memory!

As she charged into view on October 28, I said, “Sargent, we have to keep meeting like this!” WiRED co-founder and community organizer Stephanie Thomas mused, “They must have approached slowly with headlights off because it was as if a space ship landed. About six police cars came out of nowhere with lights flashing around 4:30 AM like a tornado, suddenly surrounding us. It was like they were playing war games and had a predetermined plan, not a decent engagement with peaceful protesters allowing for things to unfold in a humane manner. Cops immediately announced they had a vehicle to take us to jail if we didn’t move.” I didn’t hear that. 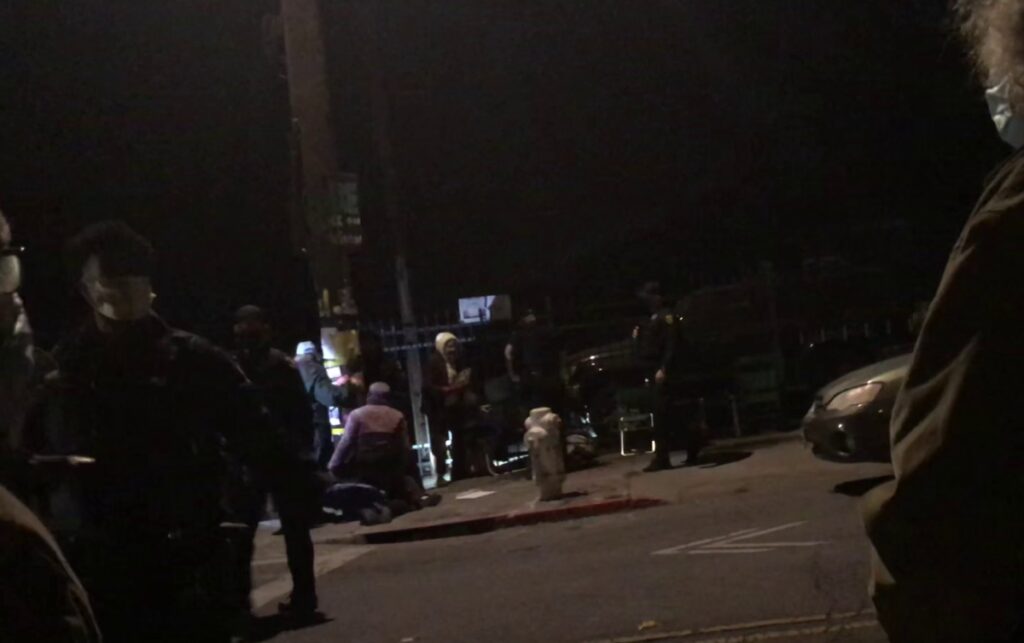 We were not given the standard three orders to disperse that morning or on other occasions. Most of my cohorts would have left voluntarily, but on October 28, police swooped in. It was a surprise blitz before the contractors even arrived, a preemptory escalation of Berkeley police taking AT&T’s side against the people, another reason to fire the city manager and police chief Greenwood. Such a lovely name, but as ugly as industrial clutter in our neighborhoods if it means prioritizing dollars over people! Has fascism come even to the Home of the Free Speech Movement?

Author Phoebe Sorgen, co-founder of WiRED (WIreless Radiation Education & Defense), may now identify as a jailbird. She is on the National Committee of the Green Party US (the decision-making body) and on the Peace, International, and Conflict Resolution Committees of the GP-US. She is an activism addict and voice teacher.

This entry was posted in 5G, Berkeley, California, Citizen rebellion. Bookmark the permalink.