In the Dark of Night, Police Backed ATT in Clash with Berkeley Neighborhood over 4/5G antennas

This report was provided to us by WiRED Berkeley: http://www.GoWiRED.org

On October 5, nearly twenty people began vigils before 1:00 AM at two sites in hopes of stopping wireless antenna installations on utility poles in the public right of way. Residences and a school are near the sites at the popular Monterey Market and Berkeley Natural Grocery. AT&T contractors arrived at 3:30 AM and, seeing the “pole protectors,” called the police who removed the residents and activists by force at both sites. Grounding wires were then installed, but not the antennas and “smart” meters.

Former Planning Commissioner Clifford Fred who lives nearby said, “I’m shocked that city officials knew that AT&T violated Berkeley Municipal Code 16.10.040 by not notifying people within 500 feet of the 1321 Gilman or 1550 Hopkins poles before the controversial cell towers were approved, but let AT&T get away with violating the city laws. Officials used to care but now are keen on letting big telecom companies have their way.”

Background: After trying for three years to get local laws improved, residents and activists prevented installations eight times in recent months by refusing to leave utility poles when contractors arrived, or by asking to see their permit, examining it, and telling them they must leave if it had expired. Work is not allowed prior to 7:00 AM, so the team took turns guarding the poles starting at 6:30 AM on weekdays. 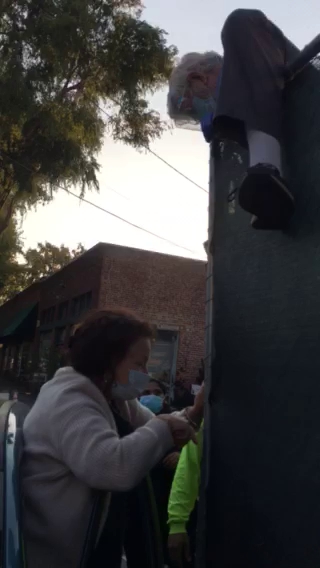 On August 19, contractors arrived at 6:00 AM and quickly put up 8-foot tall chain link fences around the poles. Cynthia Papermaster parked her car close enough to be used as a ladder. Lloyd Morgan, who became an Environmental Health Trust Senior Research Fellow after surviving a brain tumor caused by EMF radiation, climbed onto the roof of her car, and then over the barrier. He is a spry 78 year old, but one foot got stuck on the fence. Papermaster reached high and pushed that foot over. He landed on a sturdy trash can inside the barrier where he stood for three hours until the workers and police gave up and left.

On September 21, the AT&T contractors and police beat the protectors to both sites, noisily setting up the metal fence at 2:00 AM, and then waited until 7:00 AM to install ancillary equipment. Since then, an elder and a young neighbor, Sierra Murphree, have sometimes slept in a tent at the foot of one pole so, if workers arrived, they could awaken and alert other protectors to join them before the barriers went up.

Stand off! On October 5, protectors arrived long before workers at both sites, but were escorted, dragged, or carried across the street by police. Papermaster, who screamed when she thought her arm was being broken as she was hauled off, later said, “More important than my pain is that we were removed from a public sidewalk so that a private multi-billion dollar company, with help from the police paid by our taxes, could perform non-essential work in the middle of the night, violating Berkeley’s laws.”

Jason Winnett wrote of the incident to the Berkeley City Council, “I exercised my constitutional rights where crews were attempting to erect a cell tower which has been protested, clearly unwanted by residents. According to my understanding, there were actions by private parties as well as Berkeley police that have questionable legality… 24 hours later, I am experiencing lingering injuries, pulled muscles from being handled roughly. I was appalled to see women in their 70’s, concerned citizens who, after being up in vigil all night, were roughly handled by a large number of young, strong officers… We seem to be heading into what is known as fascism.”

Meave O’Connor, treasurer for WIreless Radiation Education & Defense (WiRED), was also injured by the police’s excessive use of force, photographed her bruises, and filed a complaint. She wrote to the City Council, “By trying to stop AT&T we had the Berkeley law on our side but it did not help us defend our Commons. The police were called and brutally removed us, roughing us up badly… Berkeley is voluntarily handing its autonomy to the telecom corporations, even using police to do corporate bidding… Who gave the orders to use the Berkeley police in that way?”

After being dragged offsite that night, WiRED co-founder Phoebe Sorgen asked Sgt. Ronnie Hernandez who was paying the police, and was told that AT&T will reimburse the city. Instead, why aren’t the police patrolling the streets to stop assaults and burglaries? Catalytic converters have been stolen from three WiRED members’ cars.

Sgt. Hernandez then asked what the fuss is about.  Sorgen told her that antennas emit EMF/RF microwave radiation that sickens people and harms flora and fauna. They also increase fire risks, and overloaded, weathered poles sometimes fall.  Business and property values plummet nearby. 5G is an energy glutton  too. Wired connections—whether copper or fiber—will always be faster, greener, safer, more reliable, and more secure than wireless. “We need to preserve our right to privacy. Furthermore, there’s no AT&T service gap here, and the people don’t want additional ugly industrial clutter destroying the character and peaceful enjoyment of our neighborhoods. 5G is a scam for corporate greed.” Though appalled by the police misconduct, she is grateful that no one was jailed and that those who obeyed the police order to leave were not injured. However, several of them said they were emotionally traumatized. Daniel Borgstrom, whom police escorted across the street, mused, “According to scientific reports, microwaving from 5G can cause memory loss, so maybe we’ll forget all about it.” 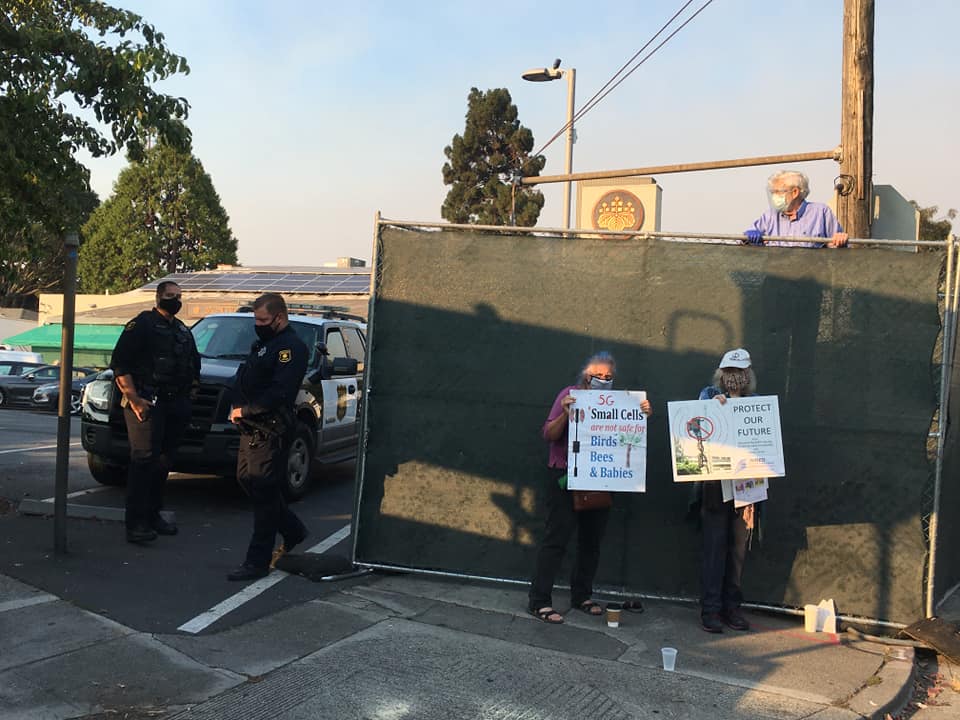 Berkeley sidewalks, many near residences, schools, and healthcare facilities. Most of the permits expired in August, but were extended until 2021. Without a signature, they are invalid. Berkeleyans had urged the City Manager to exercise her option of requiring AT&T to reapply. WiRED has been lobbying and raising awareness since 2017, including hosting public forums.  Two City Councilmembers co-hosted a forum featuring Dafna Tachover of  Children’s Health Defense. WiRED is fundraising to pay attorney Ariel Strauss, of Greenfire Law, who helped craft stronger local laws such as requiring companies to put equipment underground, but the laws do not apply retroactively, and the City Council did not go nearly far enough, so WiRED is pushing for amendments.

Similar injustices have occurred nationwide. When public officials or officers brutally take the side of giant corporations against the public health and interest of the people whose taxes pay their salaries, they betray their oaths of office. They are no longer public servants. Instead of serving the people they are supposed to represent, they are serving corporate interests, which is the definition of fascism. Big Telecom will stop at nothing to increase profit. We, the people, are able to stop our officials from doing Big Telecom’s bidding against us. Wherever you are, please forge alliances, educate your neighbors, strategize, and resist creatively together. Now is the time to stand up to the corporatocracy, non-violently but assertively, in order to reclaim our power. 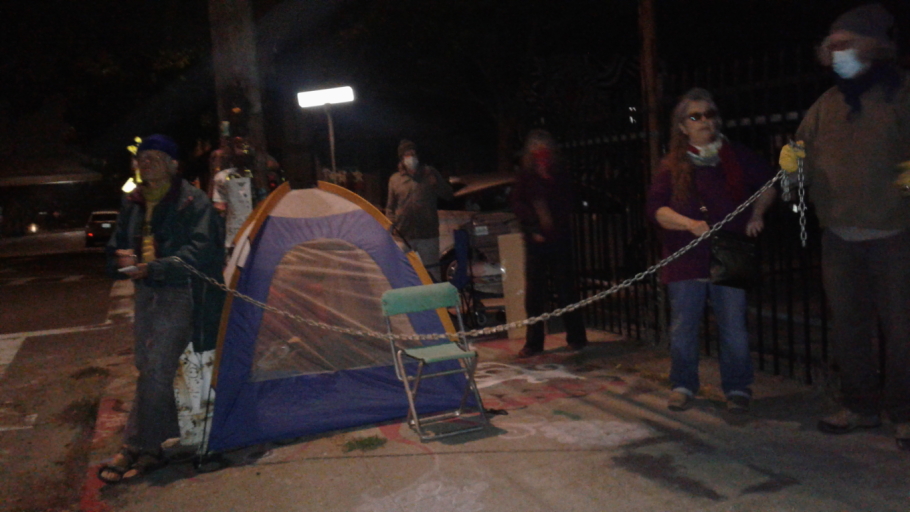 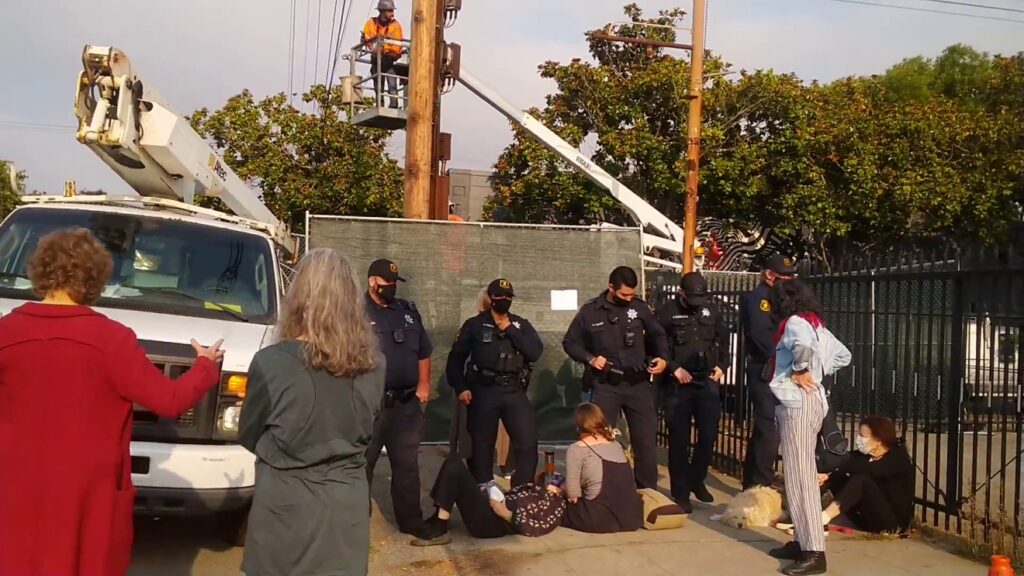 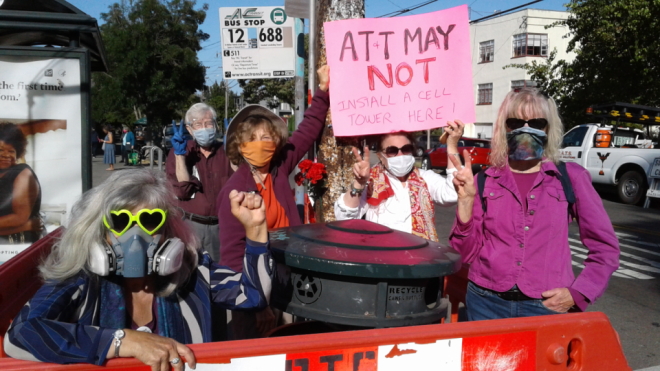 2 Responses to In the Dark of Night, Police Backed ATT in Clash with Berkeley Neighborhood over 4/5G antennas