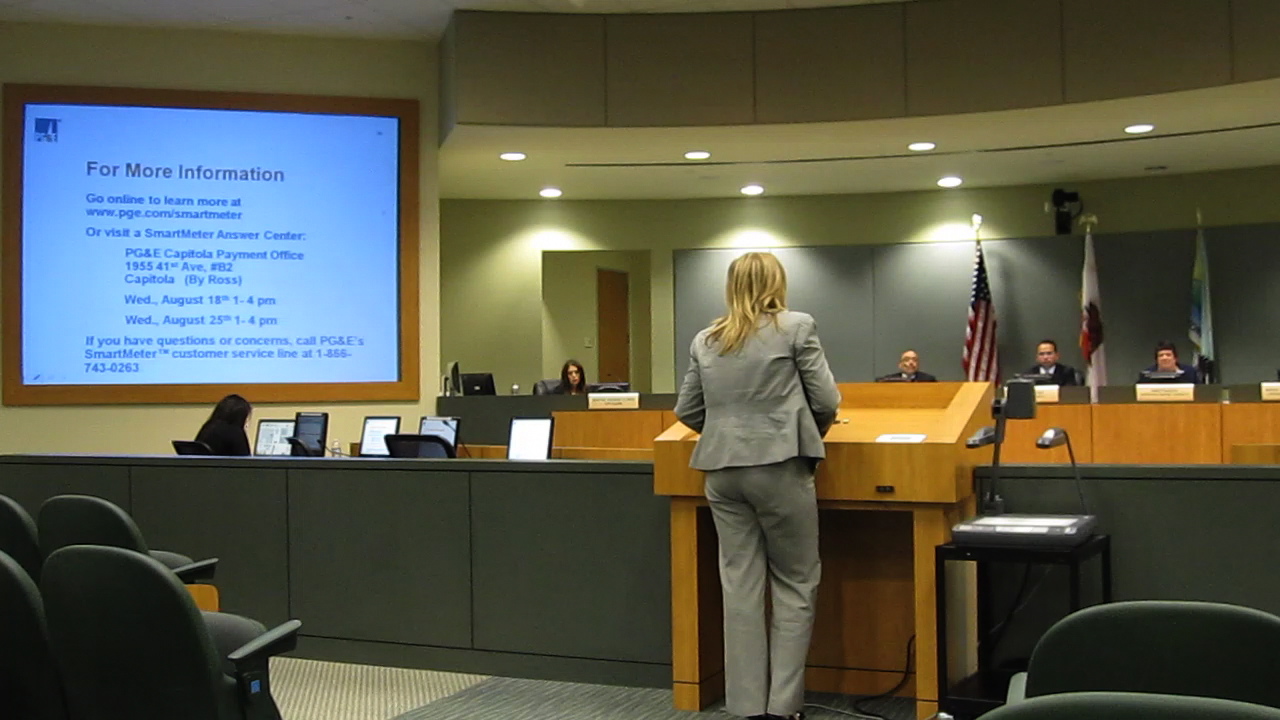 Now normally, we try to keep things a little light, and not delve into lengthy legal documents here at Stop Smart Meters!  But after reviewing the ordinance that Watsonville passed unanimously on August 24th, we believe it is worth it for citizens and their elected representatives to take the time to read this law.

Perhaps your local city or county has not yet passed a law banning installation of ‘smart’ meters (only Fairfax and Watsonville have done so, though many others are considering it).  Why not go ahead and send your councilmembers or supervisors an e-mail with this link and encourage them to follow Watsonville’s lead?

NOW, THEREFORE, THE CITY COUNCIL OF THE CITY OF WATSONVILLE,
CALIFORNIA, DOES HEREBY ORDAIN AS FOLLOWS:
Section 1. No SmartMeter may be installed in or on any home, apartment,
condominium or business in the City of Watsonville, and no equipment related to
SmartMeters may be installed in, on, under, or above any public street or public right of
way in the City for twelve (12) months from the date of this Ordinance, at which time the
Watsonville City Council, shall consider whether to extend or terminate this prohibition
in light of the then-current data on SmartMeter privacy, safety, accuracy and health
effects.
Section 2. Violations of the Moratorium may be charged as infractions or
misdemeanors as set forth in Section 1-2.10 of the Watsonville Municipal Code or
otherwise as set forth in Article 1 of Chapter 2 of Title 1 of the Watsonville Municipal
Code in the discretion of the City. In addition, violations shall be deemed public
nuisances, with enforcement by injunction or any other remedy authorized by law.
Section 3. The City Manager is hereby authorized on behalf of the City of
Watsonville to direct all City Departments, to facilitate compliance with the purpose and
intent of this Ordinance using the enforcement powers described in the preceding
paragraph.
Section 4. This City Council finds and determines that: (a) there is a current
and immediate threat to the public health, safety and welfare; (b) the moratorium must
be imposed in order to protect and preserve the public interest, health, safety, comfort
and convenience and to preserve the public welfare; and (c) it is necessary to preserve
the public health and safety of all residents or landowners adjacent to such uses as are
affected by this interim ordinance as well as to protect all of the citizens of Watsonville
by preserving and improving the aesthetic and economic conditions of the City.
Section 5. Any provision of the Watsonville Municipal Code or other
ordinances of the City inconsistent herewith, to the extent of such inconsistencies and
no further, is hereby suspended during this interim ordinance.
Section 6. If any provision of this interim ordinance is held to be
unconstitutional, it is the intent of the City Council that such portions of such ordinance
be severable from the remainder and the remainder be given full force and effect.
Section 7. The interim ordinance is declared to be an emergency measure
adopted pursuant to the provisions of Section 602 of the Watsonville City Charter and
California Government Code Section 65858 and is necessary for preserving the public
peace, health, safety, and property, and the general welfare and urgency for its
adoption are set forth in the findings above.
Section 8. This interim ordinance shall take effect and be in force immediately
upon its adoption and shall remain in effect until August 25, 201 1, unless otherwise
modified by ordinance; and on August 26, 201 1, it shall be of no further force and
effect.
Section 9. The City Clerk is hereby directed to cause this interim ordinance to
be published once in the official newspaper within fifteen (15) days after its adoption.
The foregoing ordinance was introduced and adopted at a regular meeting of the
Council of the City of Watsonville, held on the 24th day of Auqust , 2010, by
Member Rivas , who moved its introduction and adoption, which motion being duly
seconded by Member Martinez , was upon roll call carried and ordinance adopted,
ordered printed and published by the following vote:
AYES: COUNCIL MEMBERS: Bersamin, Bilicich, Caput, Martinez,
Petersen, Rivas, Alejo
NOES:
ABSENT:
ATTEST:
APPROVED AS TO F P M :
ri 8/24/2020 10:14:05 PM