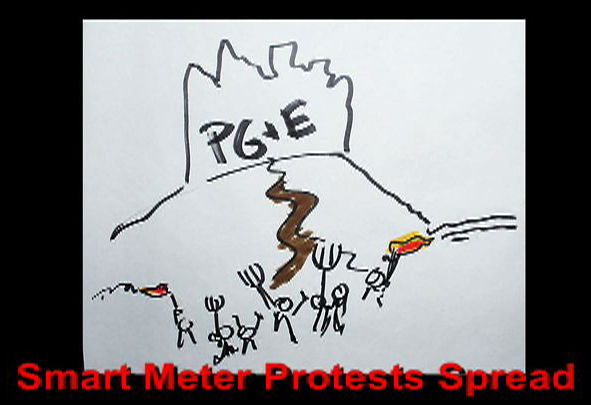 The County of Marin- north of San Francisco- on Tuesday became the 2nd County in California, after Santa Cruz, to pass a law banning PG&E’s new wireless smart meters.  The move comes after two successive board meetings were packed by over 100 outraged members of the community, and a successful blockade of a dozen Wellington Energy ‘smart’ meter installation trucks was carried out in West Marin in late December, resulting in the arrests of two local mothers.

Other local governments are poised to follow Marin County’s lead, including San Luis Obispo County, the City of San Clemente, and the City of Monterey.  The Chronicle reports that PG&E says they will continue to install the meters despite the growing revolt against them:

“Continuing the program will allow all our customers to enjoy these benefits,” he said.

This is a little bit like a rapist, who refuses to hear his victim when she says “NO” repeatedly.  In convincing himself that she will benefit- or receive pleasure from what he is doing, he carries on regardless of her increasing protests.  Smith uses the fact that PG&E has held a number of meetings in the County as justification for their continued installation.   “Sweetheart, you’ve gone on 4 dates with me already, therefore I don’t need to pause my advances.”

If PG&E won’t respect the wishes of the population, and our democratically elected representatives, perhaps the sheriff will have to shift his attention from peaceful protesters to Wellington installers.   These are guys just doing their job though.  What would be most appropriate in this situation would be to jail the criminal thugs at the top of the corporation- for espionage, home invasion, and crimes against humanity.

Listen to Stop Smart Meters! Director Josh Hart and Rebecca, an electrically sensitive woman from San Diego who was forced to give up her professional practice and home and move out of state because of the ‘smart’ meter program, interviewed on the KPFA morning show yesterday.