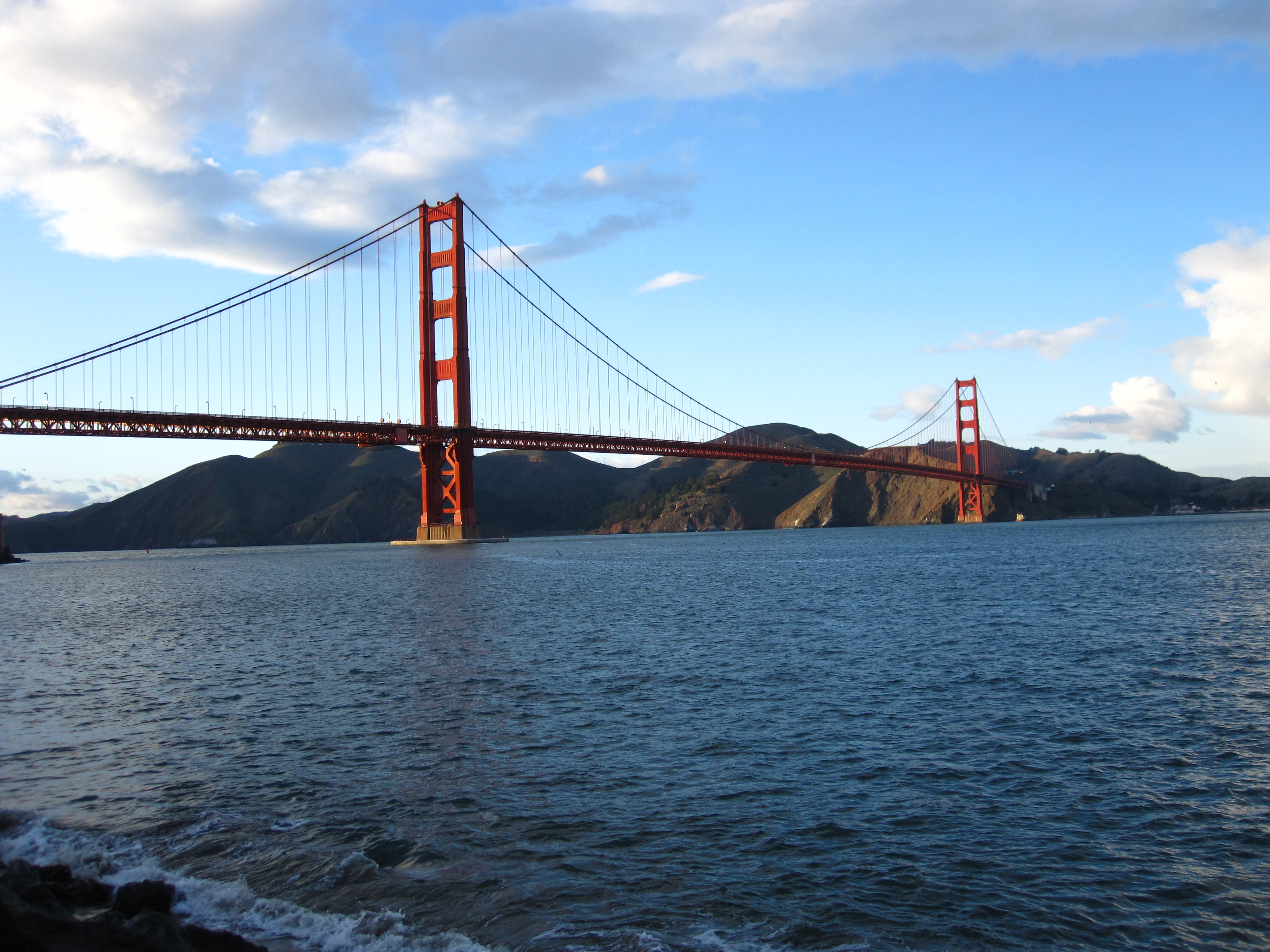 Widespread deployment of 'smart' meters is imminent in San Francisco.

More cities and counties every week are moving to criminalize ‘smart’ meter installations in response to people who are being sickened by the powerful bursts of rf radiation (now up to 25 local governments have officially demanded a halt to the program). The town of Rio Dell in Humboldt County is the latest to ban the devices outright, and Mendocino County will consider a ban on Tuesday.  Four women have been arrested at two separate protests in the North Bay over the last month for peacefully blocking installations of the meters.  And questions are now being raised about the make up and scientific objectivity of the CCST panel whose report was widely reported to give the ‘all clear’ on health matters last week.

Nevertheless, amidst all the controversy, and despite the SF Board of Supervisors formal opposition to the meters, PG&E tells the Chronicle they are preparing to install in the City within the next two weeks.  As the company admits in their internal documents obtained through a freedom of information request, San Francisco poses a special challenge to the ill-fated wireless smart meter program (beyond the City’s history of civil disobedience).  Many utility rooms (with sometimes hundreds of meters) are underground, downtown urban canyons interfere with wireless communications, and a lack of utility poles in many areas means they have to install their data collector units (or DCU’s) under grates and other awkward locations closer to the public.

So you would think they would be sensible and use fibre optic cable or something.  But the first thing you gotta learn if you’re a piggy feeding from the ratepayer and taxpayer feeding trough is to always make things more technically complex and expensive than they need to be.  Thus, of course they just make the wireless signal STRONGER.  That’s right PG&E has developed a secret weapon to deal with the pesky problems posed by the City and its residents– a powerful transmitter called S.U.N.D.S: 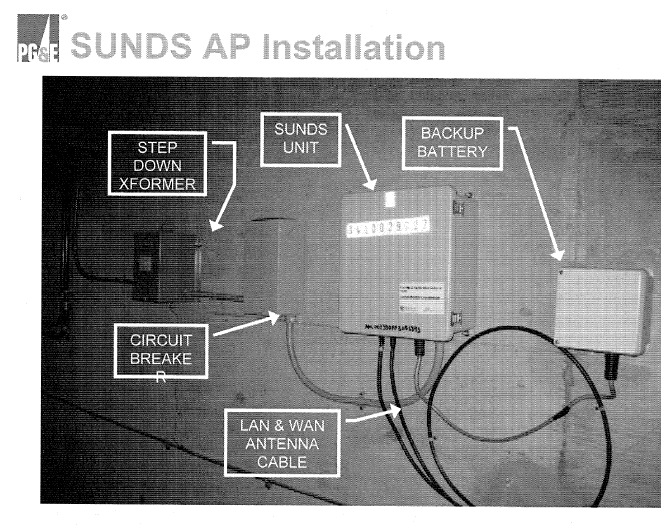 These extra strength wireless devices will be used to send utility usage data to the surface from underground utility rooms- rather like killing an ant with a sledgehammer. This is set to be rolled out in SF on a massive scale despite thousands already sickened by the emissions from the regular meters.

The SUNDS program (Subterranean Network Deployment System) which in practical terms- combined with the density of the land use in the city means that RF from the smart meter system is likely to be considerably stronger in SF than elsewhere.  An anonymous source at PG&E tells us that the SUNDS program involves boosting the antenna power from 1 to 6 watts- which would mean another potential violation of FCC limits.  This really is the wild west with regulators and legislators asleep at the wheel, drugged by donations as the car accelerates toward the cliff. 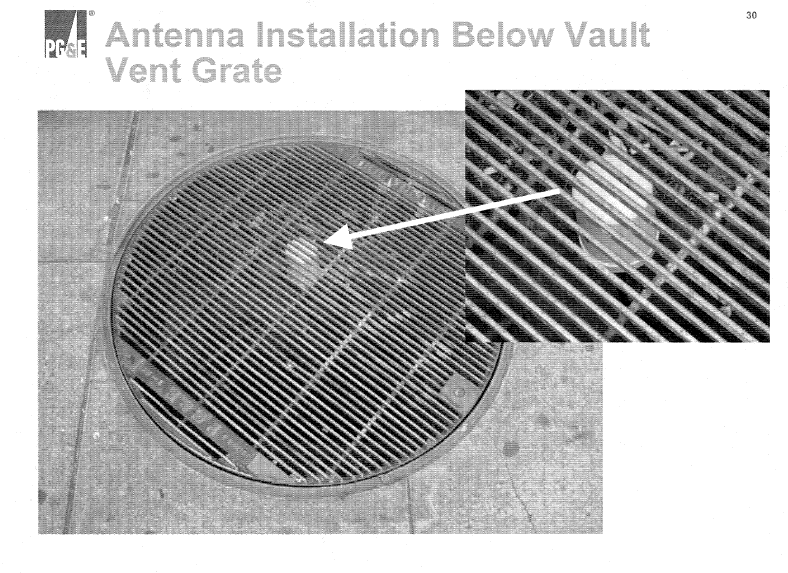 Wireless antenna are being installed under utility grates throughout the city. Did PG&E obtain permission from the city for these? Homeless people sleep on top of these grates to keep warm in the winter- what about their health?

How many thousands of people will be sickened and sleepless after these are installed?

Exposing the population to wireless radiation from these 625,000 meters packed into a 7×7 square mile city- the densest city west of the Mississippi- on top of all the pre-existing radiation- is a human experiment of unprecedented proportions.  We’d be tempted to just let them do it and allow the program to collapse in on itself- if we didn’t have friends and loved ones living in the City who are going to be hurt.

PG&E plans to start smart meter installation in SF within the next 1-2 weeks, potentially starting in the Marina district where people have already received notification letters.  Please take a minute and write an e-mail to your friends who live in SF with some links to anti-smart meter websites like this one, and encourage them to write their supervisor and mayor to demand the city enact an ordinance prohibiting installation.

People throughout the state have stood their ground against the utilities– in Santa Cruz, Marin, and Sonoma Counties, and the truth is that this direct action has achieved results.  We wouldn’t be shocked to find out that the fleet of white Wellington trucks elicits a response from the people of San Francisco.  Send us reports of any protests and please include written accounts, photos, and video so we can post on the site.

I like the quote sent in by Nina Beety- a tireless opponent of ‘smart’ meters from Monterey County:

“It does not take a majority to prevail, but rather an irate, tireless minority keen to set brush fires of freedom in the minds of men”

Thanks for all of you who continue to make those brush fires rage. 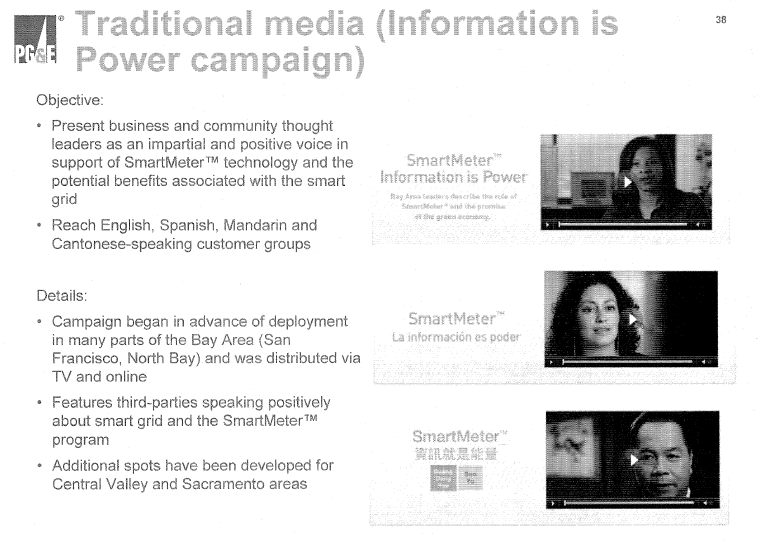 Everyone knows advertising is used to sell us on things we don't really need. PG&E has a multi-million dollar promotional campaign to 'sell' us something we certainly don't need. Don't buy their lies.

Stop Smart Meters! is able to continue doing what we do in part due to the many small donations from people like you!  Our donate page is here.  Thank you.