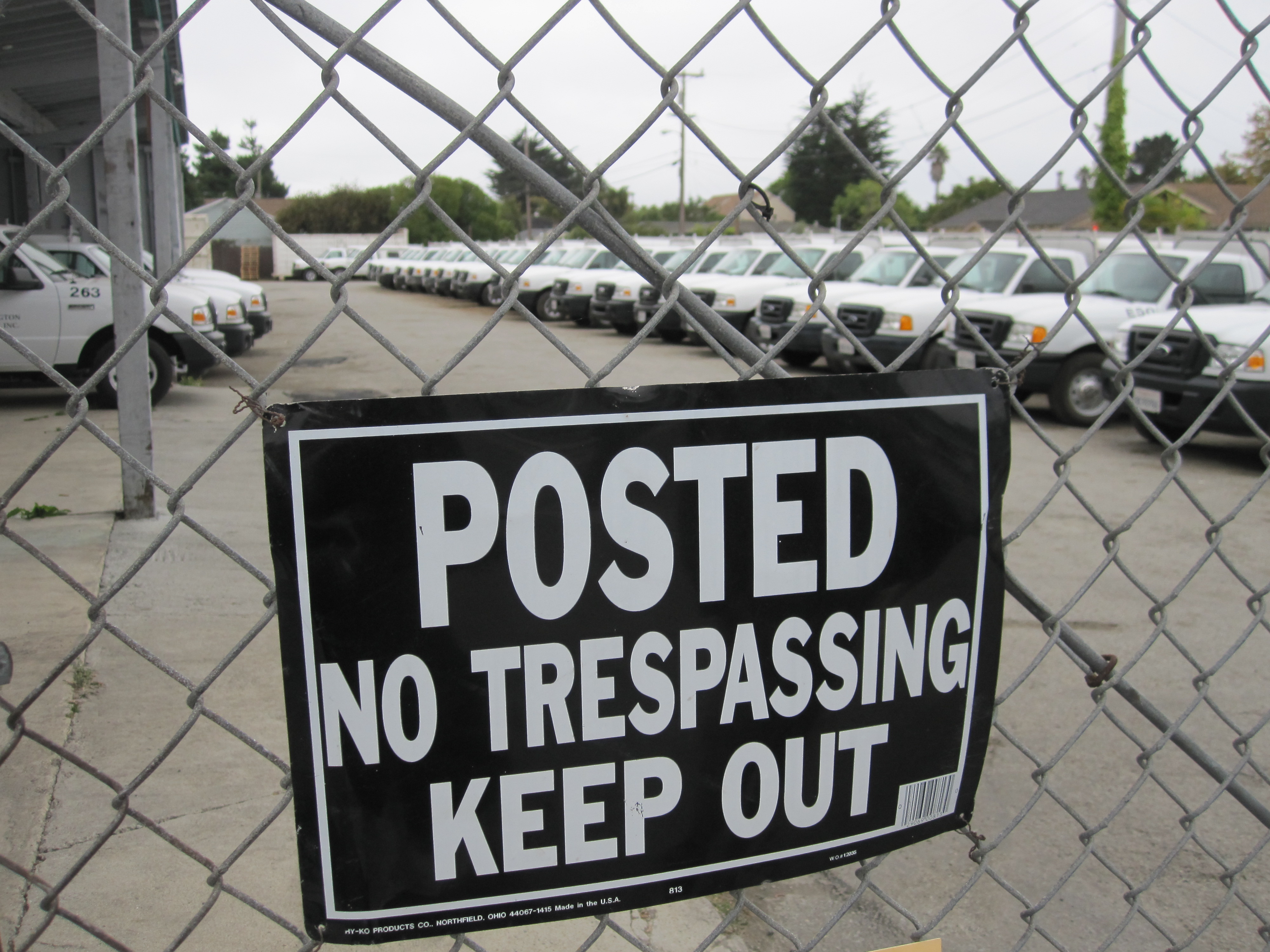 Wellington Energy is the company that is installing PG&E’s new wireless ‘smart’ meters in California.  A former Wellington Energy employee sent us an e-mail late last year offering to speak with us about his experience installing smart meters in the San Francisco Bay Area.  He has requested anonymity.  Here is the Stop Smart Meters! interview with the ‘Wellington Whistleblower’ in full:

SSM:   Thank you for getting in touch with us.   What made you want to come forward?

WW:  I’m disgusted by what I’ve seen. PG&E and Wellington need to make the public aware that there are risks with these things. They need to come clean about the emissions of harmful radio waves, potential arcing etc.    No one is taking the steps necessary to protect the public.   People need to be aware the risks that are being taken with their homes and with their lives.

SSM:  How long did you work for Wellington and where were you based?

WW: I worked at the Capitola yard from June until the beginning of September 2010, when they abandoned the yard following community protests.   After that, I worked out of the San Jose yard until the end of September when I was laid off.  I primarily installed in the Santa Cruz Mountains.

SSM:  What is your opinion of PG&E and Wellington Energy?

WW: The only thing they are concerned with is money.  Safety was an afterthought.

SSM:  What was your experience with the public?  Are people happy to have these devices installed on their homes?

WW: Most people who had looked into the issue on their own did not want the meters installed.  We were dealing with an increasingly resistant public.  Forcing these meters on people makes the job really difficult and stressful.   A few of my colleagues reported that the police were called on them multiple times.

SSM:  The FCC requires that these devices be installed by trained professional electricians. [1]  What kind of training did you receive prior to working as a ‘smart’ meter installer?

WW: We received only two weeks of training before they sent us out to do the installations.  Though the procedure is relatively simple, if you get it wrong this can lead to arcing, shorts- even house fires.  The blades on the back of the meter have to be aligned properly with the jaws on the socket the meter gets placed in.  I kept hearing one of the managers say, “you guys weren’t trained properly.”

WW:  Many of the installers would come back to the yard and report that they had come across meters that were hanging by an electrical wire, or other clearly unsafe conditions. There was a lot of pressure on workers to install as many meters as possible in a day in order to earn bonuses. One employee went out into the Santa Cruz Mountains and I think he is still out there somewhere he got so disoriented. Needless to say, improper training, and being under incredible pressure, there HAS TO be error, especially with new people working in new territory.  I overheard numerous times while at work, “you could have burned that goddamned house down.”

SSM:  Did you personally come across safety hazards?  What happened when you tried to report them?

WW: The more you called Wellington, the worse it looked on your record- because you’re wasting time.  I saw sparks coming from one of the meters on a home.  I reported it but am not sure what- if anything- was done.

SSM:  Based on your observations while working for Wellington, what are your fears about the risks they are taking with the public’s safety?

WW:  First off I can only speak about what I personally observed.  I believe- based on what I observed- that there is a chance that due to inadequate training some meters were not installed properly.  I do feel that Scotts Valley, Boulder Creek, Ben Lomond, Corralitos, to name a few should be informed enough to prepare for what could realistically turn into another San Bruno. (emphasis added)

SSM: Of course at the time of the explosion San Bruno was 100% installed with smart meters.  Are you aware that PG&E and the CPUC have not yet responded to questions about what safety precautions they took while installing smart meters adjacent to gas lines?  Seems like a fairly reasonable question given that the technology can generate sparks.

WW:   It really doesn’t surprise me that they haven’t answered questions regarding the smart meters and San Bruno.  When I asked one of my managers who was in charge of training “is it possible in your opinion that a fire could start from an arc from a meter located above a gas meter” (which always has some blow off gas emitting from it) he would not give me a direct answer!  He avoided the question like the plague, quoting some plumber he knew and on and on, avoiding an answer. Could the San Bruno fire have been started by an arc from a meter?  I’ll let you decide.  The definition of an electrical arc is: “a sustained luminous discharge of electricity across a gap in a circuit”. The definition of ignition: the process or means (as an electric spark) of igniting a fuel mixture.  Gas is a fuel.  I’ll leave it at that.  It doesn’t take a rocket scientist to put it all together.

SSM:  Why did you stop working for Wellington?

WW: I was let go because I took too much time with each resident.  When you are dealing with people’s lives, I don’t feel that it is proper to hang the door hanger, do your installs, and get out of there. With the reception of these meters I felt people at least needed to be talked to and listened to beforehand.  This of course resulted in my dismissal. I talked too much and too long with the customers. As a Wellington employee you must log in to your handheld computer every 15 minutes or it creates a ‘red zone’ in your day’s activities.  This is likely to be addressed to you on the phone by your boss the next day as you are trying to get your numbers up that day. A reduction in work force was eventually used as an excuse for my dismissal.   Meanwhile a training class for the same position was going on at the same time!

SSM: What do you think is really behind PG&E’s ‘smart’ meter program?

WW:  The smart meter has a hell of a lot of potential that they’re not talking about.  PG&E claims they’re not going to use that potential, but who can believe them?   Believe me they have plans for these things.   They could use it for cell phone reception, broadband, tv services etc.

SSM: As you know, people are desperate.  They’re suffering headaches, nausea, etc.  This has driven some people out of their homes.  They’re now calling them ‘smart meter refugees.’   Meanwhile PG&E and the CPUC refuse to remove them even in cases where doctors confirm that health is being jeopardized.   Based on your knowledge, can a resident remove the meters themselves?   How risky is this?

WW:  First of all, about health issues.  I was never really concerned about this, because I believed what I was told from Wellington, that the meters only emitted radio waves to send usage to a transponder close by so it could relay it to PG&E…..on a short time basis, rarely more than once a month except in the start up, and then not a lot. My manager reiterated that as well, during one of our conversations.

I was surprised to hear that the meters send signals- what- 15 per minute? We all were told they only transmit a few times a month if that, just enough to send the total usage from that account.

As far as a DIY de-installation, I don’t advise anyone who hasn’t been trained as an electrician to try and remove the meter themselves.  However, if you can find a professional electrician to help you, it’s not really that big a deal.  There is an aluminum ring that holds the meter in place. The ring comes off easy with a pair of wire cutters.  Like a watchband or a locking suitcase- you push it in and it pops off easily. You can pull the ring off and then the meter comes right off.  There are 4 pins on the back of the meter, and if you have access to an old analog meter, you could just pop it right on.  Of course the pins are now essentially live wires so these would be very dangerous to touch.

SSM:  The information that I have seen indicates that the new meters can actually be transmitting constantly [2], so it sounds like your managers were not being straight with you. What about the smart meter attachment on the gas meter?  How would one go about removing that?

WW: You can remove a smartmeter from a gas meter by removing the screws that attach the module (meter) it to the gas meter itself. It won’t interrupt the gas service at all. All the module does is track usage, the index (dial apparatus) has a key on the back which slips onto a key in the meter which has a diaphragm regulating gas pressure and turning the gas index key. 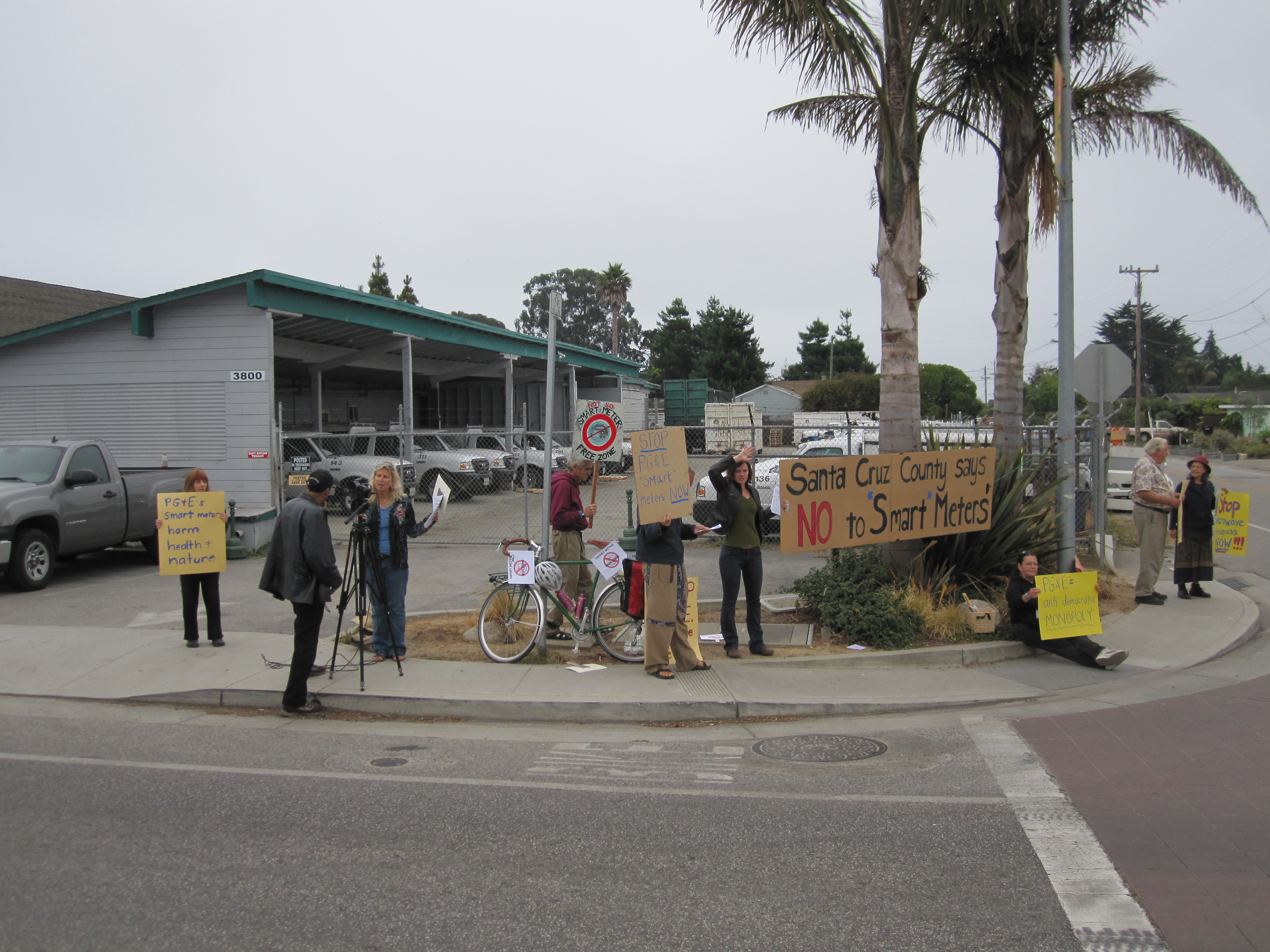 SSM: You were working at the Capitola yard in late August 2010 when the protests were going on.   What was the response from PG&E?

WW:  PG&E sent a senior security executive out to handle the situation.  The protests were effective at informing the public about the risks of smart meters- something PG&E desperately wanted to avoid.   They didn’t want the situation to escalate so they withdrew from that site, and moved us all to San Jose.

SSM: Thanks for taking the time and being brave enough to speak out.   Any last thoughts?

WW: I was never out to hurt people- this was just a job for me.   I really feel these days that big brother- in the form of the government and corporations working together- is screwing us big time.  I hope we can get regulators to pay attention on this as I believe there is a real chance of more people getting hurt if nothing is done.

Editor’s note: There have been a number of documented cases of ‘smart’ meters starting house fires, interfering with AFCI’s and GFCI’s [3] (devices intended to prevent electrical shocks), and other potentially dangerous interference.  It is not outside the realm of possibility that a smart meter played a role in the San Bruno disaster.  At the very least, this possibility needs to be investigated and questions answered.  And we find it distinctly odd that this has not happened.

Also, it is important to note that Wellington installers are temporary workers, not professionals.  They are not required to have prior experience or electrical education.  Installers have only brief training and are paid according to the volume of meters they install.  Therefore, it is typical not to report electrical irregularities because this might slow them down.  In addition, non-professionals may not recognize irregularities as well as professionals and they may be gone to another place and job before the electrical emergency occurs.  This lack of training has raised concerns in other states including Maine [4].  In addition, there are documented cases of gas smart meters being installed without adequate safety certification.  [5]

How many homes and neighbourhoods have to burn down before regulators get serious and halt further installations? How many people have to suffer sudden health deterioration before we admit there is a problem?  How many suffering people does it take to halt a $2.2 billion project?  More than a few apparently.

If you work for PG&E or Wellington Energy and you have inside information you’d like to share with the public, please contact us at info[at]stopsmartmeters[dot]org  We will absolutely respect your anonymity. 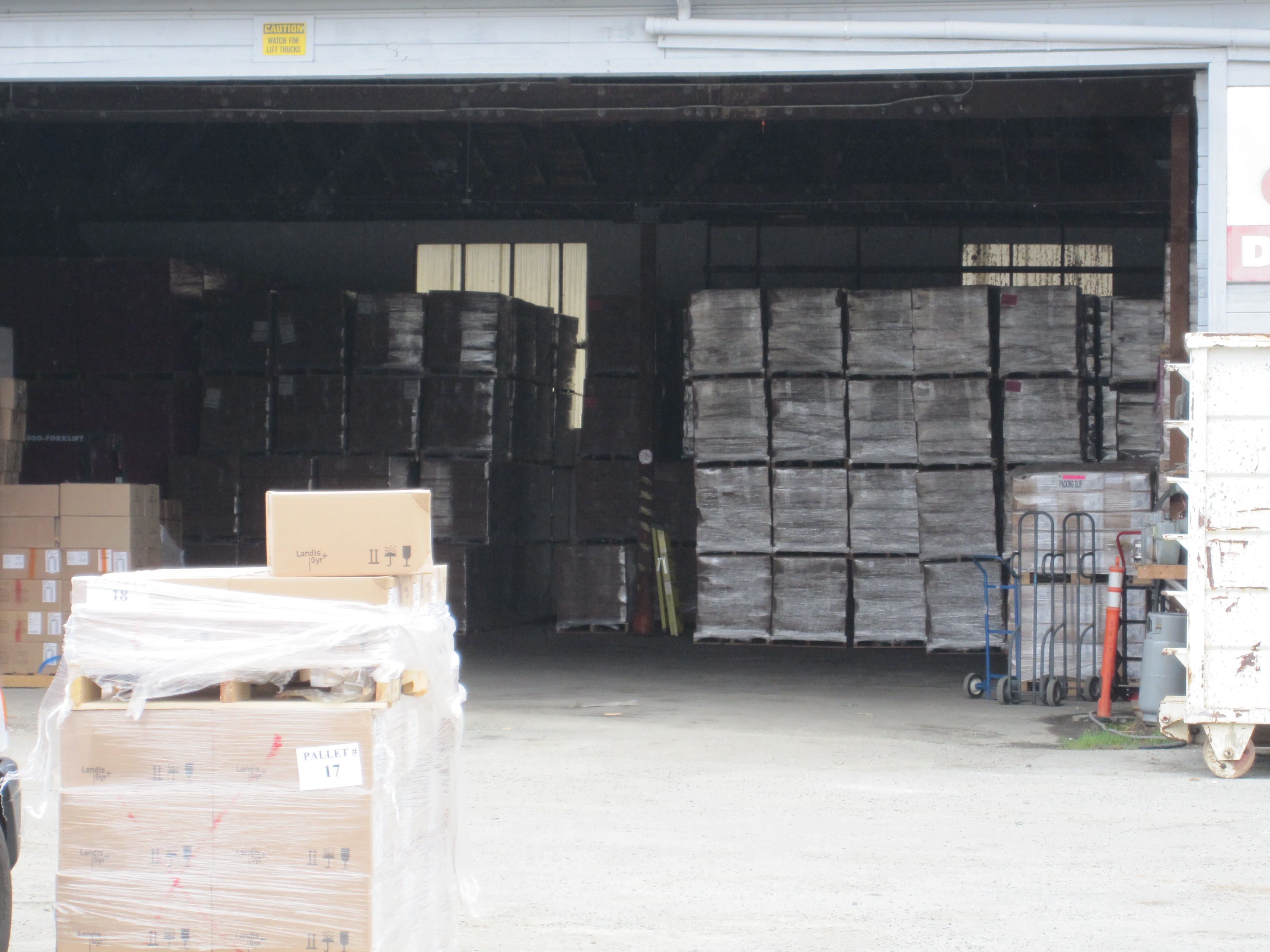 Over 10,000 ‘smart’ meters- like those in this pile in Capitola- are being installed in California everyday. It’s time for a pause, and an answer to the public’s questions.