“I’m Mad as Hell and I’m Not Going to Take This Anymore!” 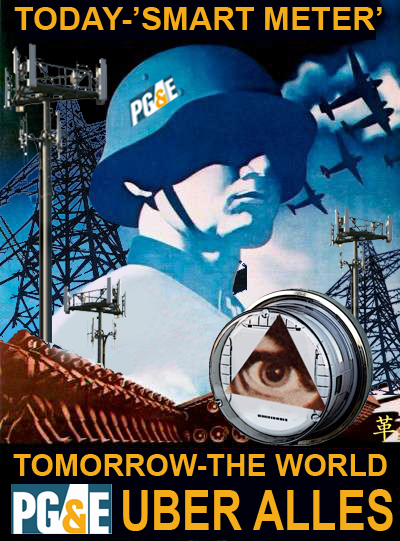 Although PG&E is not forcing anyone into concentration camps, there are recognizable whiffs of fascism in the 'smart' meter rollout- lack of choice, a failure of democracy, and high level collusion between government and corporations

Fantastic article yesterday in the Lake County Record Bee- pasted below (emphasis ours):

It’s a sad state of affairs when your peaceful, serene county begins to feel like a war zone and you have to stay home, stand guard and keep watch for the SmartMeter installation trucks rolling down your street to protect your home because PG&E doesn’t understand the meaning of the word “no.”

What part of “no” don’t they understand? We’ve posted signs saying do not install. We tell them no at the door. Kelseyville’s District Supervisor Rob Brown has followed Wellington trucks to people’s homes advising residents that they can say no when PG&E’s SmartMeter messenger and facilitator tells us we don’t have a choice. Like other cities and counties around the state, our county supervisors passed a moratorium putting a ban on installation until AB 37 has its chance in Sacramento to provide customers with an opt-out position. People have formed citizen blockades to stop SmartMeter installations. We’ve written our legislators. We’ve contacted PG&E and the CPUC. What more do we have to do? It seems that with all this and an ongoing, ever-growing movement of health professionals and scientists, community groups and regional organizations all essentially saying “stop!” we’re nonetheless being besieged by an industry with deadlines they are bent on meeting come hell or high water and the public be damned in the process.

What’s the rush? Can’t we afford the time to responsibly review the findings since the first installations went in

and see if maybe some of the problems reported by thousands of people and businesses from San Diego northward have validity? Why would so many people with no connection to each other report the same symptoms and illnesses and ridiculous and inexplicable rate hikes since SmartMeters were installed? Are these people all suffering from the same mass hysteria? Why do the cynics so quickly label all of these people as if they were lunatics wearing tin hats? Haven’t we experienced in our lifetime, the assurances of one industry or another telling us that everything is fine with their glossy brochures and P.R. campaigns and media ads, only to find out later that they either weren’t telling us the truth or didn’t have the facts or were covering up something that would be inconvenient for us to know because it would impact their bottom line? Haven’t we learned anything from the industry’s rush to profit, from the lobbying money that pollutes our political process, from “bought” science, from regulatory corruption, from payoffs to political collusion and coercion?

I think it’s high time we stood up with one, large voice and said “no” in no uncertain terms and if that means marching on Sacramento in numbers that simply can’t be ignored and making news to get the attention of those we put in office, then so be it. I think it’s time to move from blogging to marching. This country was founded on the rights of its people to protest in the face of tyranny and if this isn’t tyranny, I don’t know what is. I think it’s time we woke up and sounded the alarm and took the kind of action it takes to get government to respond when our more passive resistance goes unacknowledged. It’s either that or we all lay down and go to sleep and say, that’s the end of it, it is what it is and there’s nothing we can do about it. That’s not America to me. America is a place I grew up in where the individual mattered. Are we to just step aside while corporations and industry take over our democracy and wield their will on a powerless people or are we going to take back our place as citizens of a country that stands for freedom and make our will known to those who have assumed a position of arrogant and immovable power over us?

Know this. If we as a people united in ways that our legislators haven’t seen in years and stop falling prey to those who would have us splintered in to little groups all pitted against each other while they passed laws and adopted rules and regulations that oppressed us and diminished our rights and freedoms, we’d regain the power we all have and never lost no matter what anyone tells you. The power is in the people. The problem is we have to start acting like one people and get out of our skins and political affiliations and speak to government as a nation that rises up and says “I’m mad as hell and I’m not going to take this anymore!” as Peter Finch told his broadcast viewers in the 1976 strikingly prophetic movie, “Network.” If you haven’t seen that film, it’s worth renting if only to rekindle a spirit that empowers and makes you realize once again that your voice matters, that you have the right to be heard and that you will accept nothing less than your rightful place in the decisions that are made that affect your everyday lives.

Wake up, be heard and don’t be beaten down by those who would criticize or mock your beliefs and have you conform, get in line, go along with the program and just take whatever hand you’re dealt even if you are being dealt from a stacked deck.

A good place to begin is next Thursday’s CA Public Utililities Meeting, 9am March 24th 505 Van Ness at McAllister, SF.   Get your friends, family, children, and local government representatives to speak at the meeting where they will be discussing their “generous” opt out plan in which PG&E customers are forced to pay their utility extra for the privilege of not being directly radiated in their home.  Arrive by 8:45am to sign up to speak for one minute.

This entry was posted in Citizen rebellion, CPUC, Democracy, PG&E. Bookmark the permalink.

7 Responses to “I’m Mad as Hell and I’m Not Going to Take This Anymore!”