My Neighborhood- Why I Was Arrested 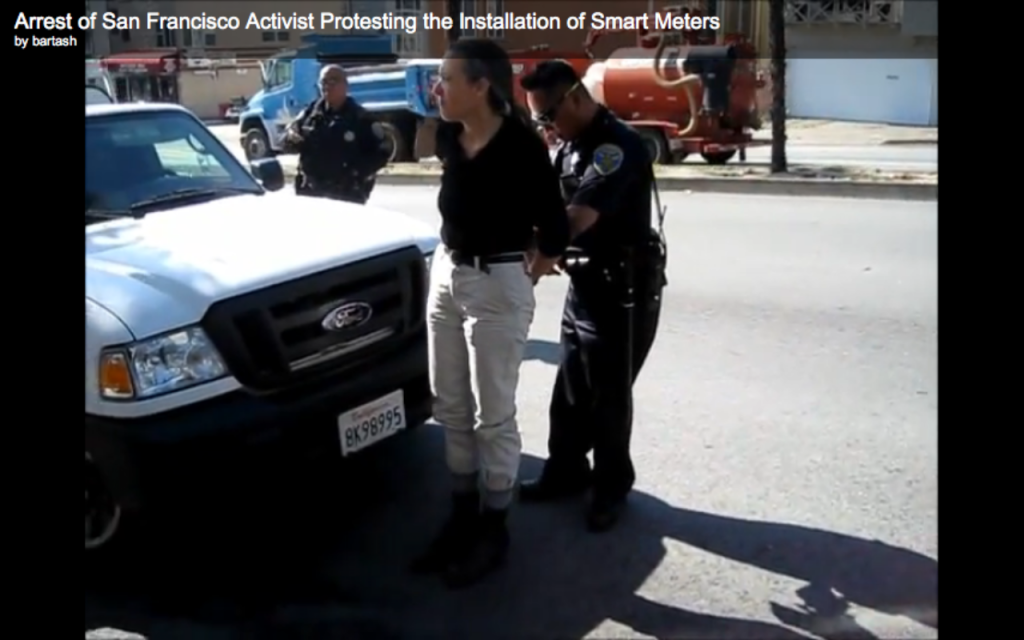 A personal statement about my arrest for non-violent civil disobedience, 18 June 2011

Why would someone do this, get themselves arrested by police over an issue like “smart”
meters?

Simply put, I will say: it’s not about my arrest, it’s about my neighborhood—a place
filled with diverse people, many of whom came to the US to find freedom, rights, and
opportunities they could never have in the places they came from.

It all started with a Russian immigrant man, coming down to the entryway of his
apartment building to see what the crazy woman was yelling about on a lovely Saturday
morning. When he found an installer from Wellington, contracted by PG&E, had put a
“smart” meter on his building without prior notice, and without anyone asking whether he
wanted it, he said flatly “This is communism. I want it off.” The Wellington installer
refused.

As the installer wheeled away his boxes of old analog meters (and some first generation
“smart” meters that he had removed—Was there something wrong with them?) and
headed back for his truck, I was overcome with a visceral sense of injustice and rage. I
caught up, riding my bike so as to come alongside of him.

“Are you going to go install more ‘smart’ meters?” I asked calmly. When he didn’t
answer, I said “I am now going to sit on your truck, and you will have to call the police to
remove me.”

None of this plan was formulated ahead in any detail. I knew only that he was going to do
more of what he had just done—it was the job he had been asked to do, the job he was
paid for—and I would not let him do it, if I had any power to stop him. I suited the action
to the word, flinging my bike down by the truck and taking care to keep my boots off his
clean white hood. He called his company, they called the police. The rest is on video.

Also shown on that video is a woman testifying to what I myself have seen over and over
in this neighborhood: coercion, threats, underhanded and sneaky tactics—PG&E’s vile
strategies to get as many “smart” meters onto homes in the shortest possible time—
without regard for citizens’ basic rights.

This is what it is about—not about being arrested—but about my neighborhood, the
people who are having these devices attached to their houses without consent, without
understanding, without any notice—or are being threatened with disconnection should
they consider disobeying the orders of the almighty Pacific Gas and Electric Co.

Down the street from me, K.S. lives with his longtime girlfriend. The PG&E bill is in her
name, and they get letters threatening disconnection if they don’t let the “smart” meter
installer into their garage to change out their analog. He believes this is because of her
Chinese surname—PG&E thinks they can intimidate her, playing on the stereotype of a
cultural reverence for authority. But he’s not having any of it—no one is putting a
“smart” meter on their house as long as he has anything to do with it. He tips me off
about where the installers are in the neighborhood.

Across the street from me, I witness the installer knock on the door of a house, find no
one home, and install the “smart” meter anyway. None of us in the neighborhood have
received prior notice, this family included.

Around the corner live two extended Chinese-immigrant families. I arrive just as the
Wellington installer is moving to the second house, having “smetered” the first one. The
man standing behind the metal security gate has only this much English: “No English,”
he says.

How can the installer get consent for an installation from someone who speaks no
English?

It’s likely he wouldn’t have balked at sticking it on anyway—but for the fact that I was
there, photographing and witnessing this farce of permission-giving. I handed the
Chinese-speaking man a flyer, hoping someone would be home later who could read it.
The installer drove off, probably to relocate to another block. It’s a Wellington shell-
game, and I’ll never keep up….

Out on my bike (no need to find parking) later the same day, I notice a slew of new
“smart” meters on the next street over. Oh well, I got there too late to catch him on this
street. Ah! There’s a beaut! I spot a “smart” meter situated at head-level, just as one
mounts the front steps on a small late-Victorian house. It clearly violates the FCC
requirement that the meters be kept 20cm away from humans. I take a photo.

A man come out, recognizes me as “that woman who got arrested”, and tells me how he
didn’t want this meter, he never received notice, and he never gave consent for it. He’d
like it off his house. It is located three feet from his favorite chair in the living room. I
give him a flyer, and encourage him to call. I ask if I can video him telling his story.

No, he doesn’t think so. A very close relative works for PG&E, they share a last name.
He just can’t do it. His neighbors’ meters on both sides have been changed out. These are
little, little houses, close together on small lots, and the “smart” meters are never farther
than 6 feet from living spaces, front walks, porches, or, quite often, from each other.

I will keep handing out the flyers, and talking to the people around me (at least those who
speak English)—and hoping that someday the really important arrest can be made—
arresting the arrogance and abuse of that oversized, profiteering corporation, PG&E, that
supplies my neighborhood with the most basic services that a body needs—heat and light.

12 Responses to My Neighborhood- Why I Was Arrested