Waiting in Vain for the Legislature 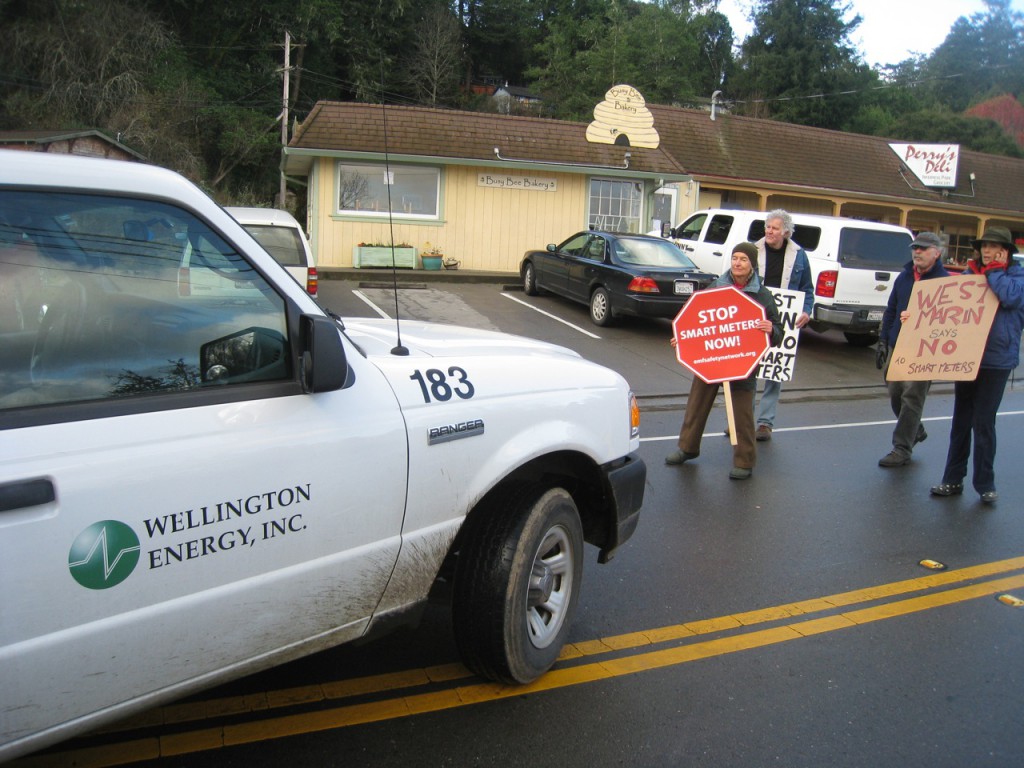 In late December 2010, residents in West Marin got sick of waiting for the legislature to do something. When PG&E tried to force their "smart" meters on the community, people blocked Sir Francis Drake Blvd. and two mothers were arrested.

A group of us have been discussing what we can realistically expect legislators to do about the ‘Smart’ Meter problem. Some of the injured believe it’s unrealistic to tell the legislators to do what we really need them to do, which is to put a stop to this dangerous program. They worry what will happen if the legislators just flat out say no, and do nothing.

They believe it’s more realistic to begin negotiating for the very least the legislators might be willing to do, to allow people to opt out of having a ‘Smart’ Meter, and that we’ll whittle away at the rest of the problem over time.

But there is no time to whittle. ‘Smart’ Meters are being installed at an alarming rate. A personal opt-out option is at best a temporary fix for some, who are most affected if the meters are installed directly on their homes. But unless whole neighborhoods opt-out, such policies are meaningless for those whose health has been hit the hardest, who have been displaced from their homes, and are barred from entire cities because of the added electro-smog from the ‘Smart’ Meters. With the ‘Smart’ Grid spreading across the country like a cancer, the most severely injured are running out of safe places to escape to.

The legislators have long been alerted to this public health emergency. It’s hardly a secret. Dozens of local governments throughout California have expressed their opposition to ‘Smart’ Meters. Several of them have even passed local laws, which the corporate giant and notorious polluter PG&E is openly and willfully defying, without legislators taking any action.

So what’s more realistic: for all of us to stand together in a united front, and defend everyone from harm without exception, or to expect legislators to come to our rescue?

Think about that for a moment.

Who do the legislators work for? Not on paper, but in reality.

When was the last time you heard of the legislature passing legislation that served the people, specifically at the expense of any corporation’s profits? If you can remember one, was it accomplished by writing letters, making phone calls, and asking the legislators nicely? Or did it take more direct action, a real battle, to push the corporate backs to the wall?

I don’t think many of us trust the legislature. Or else we’d tell them nicely what we really need, and expect to get it. We wouldn’t be talking about whether our expectations are realistic. We would expect justice to be realistic, and not negotiable.

While it may give some people hope to try to influence the legislature in our favor somehow, the truth is THAT is not realistic. The corporate entities which these politicians do serve, not on paper, but in reality, see us coming a mile away. They have endless resources to dilute, co-opt, and destroy any good legislation we might be able to introduce. I’ve seen legislation backfire so badly that it ended up doing the polar opposite of what it was intended to do, causing more harm than good. To say that it’s unlikely that we can influence the legislature is a gross understatement.

What we are really talking about here is begging untrustworthy people, who have more power than anyone should have over anyone else’s life, to do something that goes against their very nature. Why defer to their power at all?

I don’t think it’s possible to fight for liberation on our knees. I don’t believe that begging batterers to punch a little softer is a solution to violence. I’m not going to bargain over my basic human right not to be abused. The very act of negotiating over something that is ours to begin with, validates the power these people have to take our rights away.

Liberation comes from taking a strong position in defense of our human rights. Power comes from solidarity with ALL our fellow victims, and taking action collectively to stop the abuse. That’s what California residents have been doing

to stop ‘Smart’ Meter installations over the last year, that got several of them arrested: They were acting not only in self-defense, but doing community defense.

It is one thing to negotiate with PG&E on your own behalf, but it’s another thing entirely to negotiate with legislators on behalf of an entire community. If you negotiate on behalf of a community, the right thing to do is to defend the needs of the most vulnerable, who are being severely injured just walking into metered neighborhoods, not just to defend those who can still live in their homes, even if their neighbors have a meter. Even under the best circumstances, an opt-out proposal fosters the illusion, that individuals who opt IN, should have the right to choose to have devices installed on their homes that injure their neighbors.

The bottom line is that it HAS to be realistic to demand what we really need. If we don’t, some of our friends will be on the run for the rest of their lives, until the globe is covered with so much electro-smog that there will be no place to run to. It will be the death of many. That is the reality. UNLESS we have each other’s back, including first and foremost the most severely affected, the canaries in the wireless mine, who alerted us that there’s a problem with these meters in the first place. We owe our canaries not to sell them out. I couldn’t live with it. And that is what demanding anything less than what they need to survive would be.

Stop the ‘Smart’ Grid  –  Our Health is Not Negotiable!

This entry was posted in Citizen rebellion, Democracy, Electro-Hyper-Sensitivity, PG&E. Bookmark the permalink.

4 Responses to Waiting in Vain for the Legislature