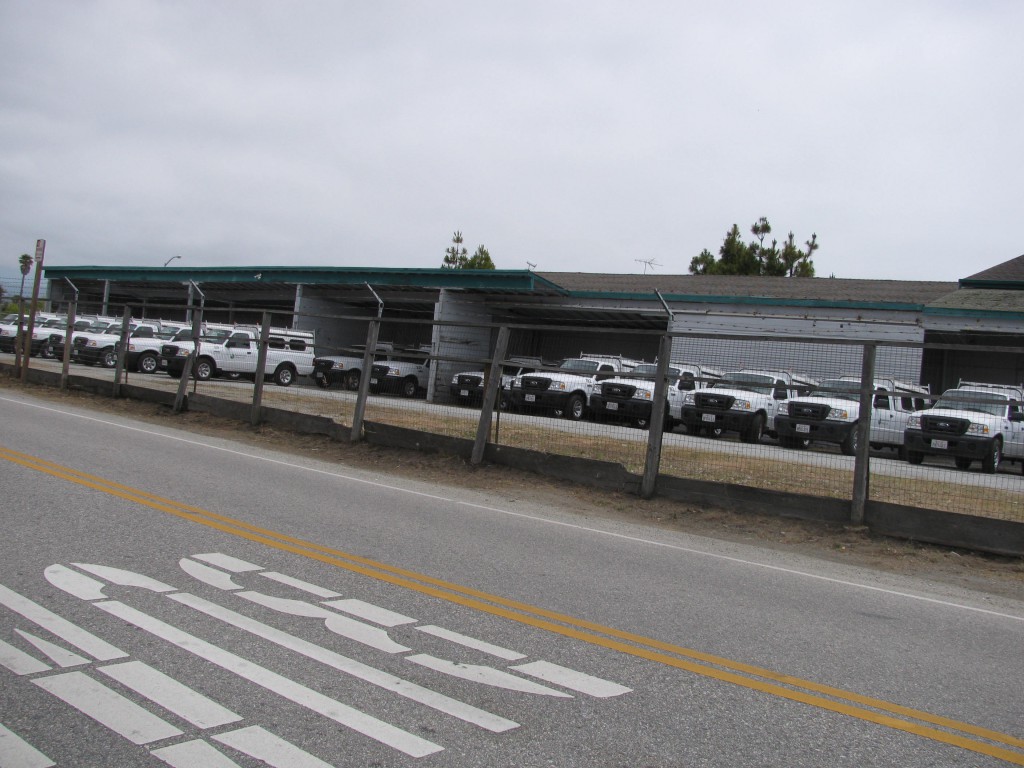 This photo was taken at Noon today- Saturday June 25th- at 38th and Portola in Capitola where Wellington Energy has moved back their installation vehicles. PG&E plans to begin installation throughout the county on Monday

Capitola- Despite virtual unanimity amongst all local governments in Santa Cruz County, ordinances in Capitola, Watsonville and the unincorporated parts of the County, a groundswell of popular opposition, a growing commitment to civil disobedience to stop the rollout of “smart” meters, and a threat from the County Counsel that the Sheriff is poised to enforce the law, PG&E and their contractors Wellington Energy have moved back into Santa Cruz, readying dozens of trucks to roll out first thing Monday morning, bringing to a head months of debate and a growing alarm about the number of reports of health problems following installations elsewhere.

According  to sources inside PG&E, the company has “shock and awe” plans to deploy  in Santa Cruz in “blitzkrieg” style, forcing hundreds of installation trucks throughout the community to complete installation within weeks.

Activists in Santa Cruz have called for an emergency community protest and blockade Monday morning June 27th 7am at the corner of 38th Ave and Portola in Capitola. They are encouraging people to spread the word widely, to bring signs, leaflets, noisemakers, and your anger at PG&E for forcing a dangerous device onto people and wildlife of California.  Smart meters emit radiation that has been linked by the World Health Organization to cancer.  They allow unprecedented privacy violations within the home.  They have also been linked with a number of fires and explosions.  And that’s just the beginning….

Stop Smart Meters! made the following statement this morning:

“Communities as a whole- not just individuals- have the right to decide for themselves whether to take the risk of accepting 22,000 radiation spikes per day from every meter in our neighborhoods- radiation that is far stronger that common household devices like cell phones according to independent experts.   We don’t recognize the authority of PG&E and the CPUC to force ‘smart’ meters (what even the World Health Organization has now accepted as a cancer risk) on the community against our will, and against the will of our elected officials.  If PG&E is unwilling to accept the will of the community, then the community will give them a fight if that’s what they want.  The people will do what it takes to keep ‘smart’ meters out of the County. “

This entry was posted in Citizen rebellion, Democracy, PG&E. Bookmark the permalink.