Not so Smart: PG&E Tactics Turning Off the Public 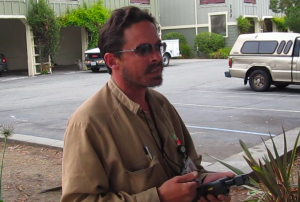 A Wellington worker tries to install a "smart" meter- tactics are growing increasingly desperate as the public resists.

Pacific Gas and Electric- the beleaguered California utility company at the center of the widening “smart” meter scandal, seems to be just digging themselves in deeper every day.  Today, we have a report from Mendocino County, where they are paying Wellington Energy installers $50/ hr to threaten and intimidate residents into allowing a ‘smart’ meter on their property.  Even those still not convinced about the hazards of “smart” meter radiation are joining our cause, simply because PG&E tactics are so repugnant.

Then we have a letter to the editor that appeared in the Monterey Herald last week.  The woman rightly points out that PG&E must be swimming in cash to afford ‘smart’ meter ads- and that cash is coming from our exorbitant rates!

We could have told PG&E that violating local laws, sneaking around people’s property, and treating them like 5-year-olds, flooding the airwaves with advertising for a product you’ve already bought is not destined to make them any friends.  But friends are not what they’re after- being a monopoly they have you just where they want you.  It’s enough to make one want to go off the grid- permanently.

Report from a resident in Mendocino County:

“Wow. I just had a hugely unpleasant encounter with a couple of guys from PG&E who wanted to install a smart meter at my house.

Our family lives just north of the Ukiah city line, in Mendocino. These guys showed up at 4 PM, when nobody is home…usually, but today was an exception.

First, I want to be clear that I have not formed an opinion about smart meters.

Part of me suspects that the “tinfoil hat crowd” here in Mendocino County — known for its local colorful radicals — has overstated the dangers of smart meters. Don’t get me wrong. I love our old hippies. They are the county’s historical memory and conscience in many ways. In the past, they’ve led the movements to save our redwoods, our headwaters, our coasts, our rivers and streams, our open spaces, our family farms, our salmon, our spotted owls, etc. However, I have wondered does saying no to smart meters fall into the same category as saving endangered places, plants, and animals?

Another part of me also believes that our environment is already saturated with microwaves, radio waves, etc., and we don’t know the cumulative effect of so much background radiation on our health. Medical researchers simply haven’t adequately studied the problem. It would not surprise me in the least, if, 50 years from now, we had an epidemic of brain cancer.

Let’s face it: Smart meters are transmitters, plain and simple. Smart meters are 1-watt transmitters that transmit energy data over wireless networks. At public hearings conducted by the California Public Utilities Commission (CPUC), witnesses have testified about serious symptoms, including ringing in the ears, nausea, and fatigue, after smart meters were installed at their homes. Doctors and a UCSF researcher have also testified at CPUC hearings about smart meters and their effect on “electrically-sensitive” people. One witness estimated there are 120,000 electrically-sensitive people living in California alone.

So, call me undecided.

That said, the two guys from PG&E sort of snuck up on my property. They parked their truck at the end of my driveway, instead of parking near the front door. They didn’t ring my doorbell. They didn’t knock. I did not even know they were on the property, until my dogs started barking.

When I confronted them, I asked who they were. They said they were from PG&E and were installing a smart meter. In fact, in the minute it took me to react to their presence, they had already started installing it. The smart reader device was already out of its box.

I told them to stop. I told them that the Mendocino County Board of Supervisors had voted to declare a moratorium on installing smart meters. They said the moratorium didn’t matter, and that, “Everyone would end up getting a smart meter whether they wanted one or not.”

I told them to immediately leave my property. They reiterated, “Everyone will get a smart meter whether they want one or not.”

When I then told these two guys, who, incidentally were dressed in matching light brown uniforms, that my answer was still no, at least for the present time, they told me that our family would be “put on a list.”

I asked what list? They said, “You know what list…the list of people who are causing us trouble.”

With that statement, I informed these two knuckleheads that I was calling 911 in exactly one minute, and for good measure I was getting my baseball bat. I told them to scram. They put the smart meter device back in its box. They threw a pamphlet on my doorstep, and they made haste for their truck.

The pamphlet is entitled: “See Your Power. Say Hello To Your New Smartmeter”.

I’m informing Carre Brown, who represents me here in the 2nd District, of this incident. Apparently, the BOS moratorium doesn’t mean a damn thing to PG&E.

Bottom line: Had I not been home, I would have had a smart meter installed.

Talk about disrespecting authority! I thought that was the province of the tinfoil hat crowd, not PG&E. I may just get myself a tinfoil hat of my own.”

PG&E commercials a waste of money

I have become increasingly annoyed with PG&E commercials touting the benefits of charting usage hour by hour. I feel the commercials speak to us as if we were children who just don’t understand.

Do I need a smart meter to tell me that my usage will “peak” if I run the washer, dryer and dishwasher in the same hour? No. Does this mean I should run the different appliances on a schedule? Will this cost less as we are still using the same amount of power for each appliance?

The most annoying commercial is the one about the father who suddenly realizes his power usage has gone up when his child comes home from college. What parent doesn’t know that when their child comes home from college, electric use will go up because there is an additional person in the house? Sure don’t need a smart meter to tell us that. Along with using power to check usage hour by hour, who has the time?

Perhaps PG&E could better use the money it is spending on commercials to make us see the wonderful advantages of smart meters by giving us all a rebate for the year. Obviously, they have the money to burn.

3 Responses to Not so Smart: PG&E Tactics Turning Off the Public