Smart Meters Being Funded by the US Military? 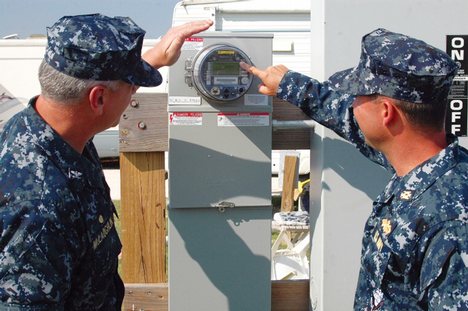 Was the US Military involved in 'smart' meter R&D? New documents suggest just that.

The utility companies have described their installation of ‘smart’ meters as a “deployment.”  They have called those of us peacefully defending the safety and health of the public “insurgents.” At times, scenes of the public physically blocking military-style smart meter installations conjure up images of wartime.   But is the smart meter program actually being funded by the military?  Is the “smart grid” somehow linked with military research and development?  That’s what documents unearthed and analyzed by Las Vegas activist and firebrand Angel de Fazio would seem to suggest.

Angel obtained a document that details a nearly 300 million dollar grant from the federal government to NV Energy to install smart meters.  On the “authorization” line it refers to two funding sources:  31 USC 6304 and 10 USC 2358.   “31 USC 6304” is a relatively straightforward designation on “using  grant agreements.”  But do a search for “10 USC 2358” and you will find it identified as “US Armed Forces Research and Development Projects”

Now at StopSmartMeters.Org we’re not the first ones to call “conspiracy” at the slightest suspicion of impropriety.  Yet this discovery raises important questions about the hasty and undemocratic smart meter installations, about the smart meters that have been spying on people and making thousands sick in their own homes from pulsed radiation.

It’s become fairly clear to anyone involved in this fight- that this is not just simply a utility meter upgrade.  There is more to these devices than meets the eye.

Given recent events, we believe there are valid reasons to be rather alarmed by Angel’s chance discovery, and at the very least the public deserves an explanation of why the military would be involved in a domestic utility project.  Some of those recent events include:

1.  Last week the US Senate approved the National Defense Authorization Act which would allow the military to detain any US Citizen indefinitely without trial or charges within the United States.

2.  Within the last month, the US Army has stationed an active unit on domestic duty within the United States- in order to deal with “civil unrest” and crowd control.

3.  There is growing evidence that US Homeland Security helped to coordinate the brutal crackdowns on the Occupy encampments in major US cities over the past few weeks.

We stated publicly in August 2010 that we believe the smart meter program is an attack on the public, and that we the people must mobilize to defend ourselves.  Today, thanks to the diligent investigative efforts of grassroots activists, we have evidence that the US military may in fact be linked with this “deployment.”

What do you think?

Calls to the grant administrator were not returned.

21 Responses to Smart Meters Being Funded by the US Military?