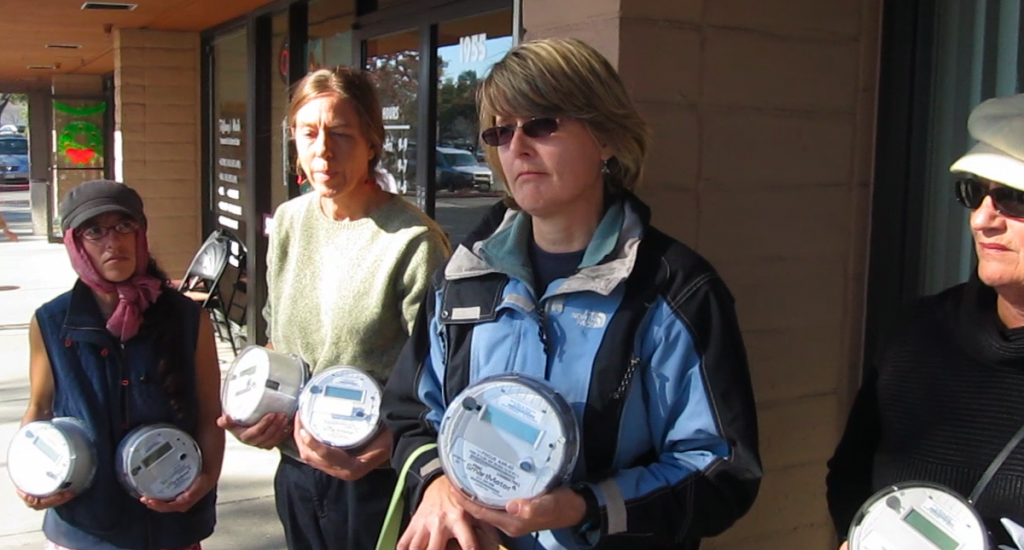 Bianca Carn, Santa Cruz mother of 2, is now being threatened with electricity disconnection two weeks before Christmas- for removing the 'smart' meter outside her children's bedroom that was causing headaches.

Hundreds of Households Having SmartMeters Removed as Health Toll Mounts

Capitola, CA- Last Wednesday, more than a dozen Santa Cruz County residents- including mothers and grandmothers- assembled outside Pacific Gas and Electric’s Capitola Payment Center with their unwanted wireless electric meters in hand, and spoke about what prompted them to defy their utility and replace the ‘smart’ meter on their homes with widely available analog meters.  After being interviewed by the media, they quietly got in line and waited for the next clerk. But before they could speak to anyone, PG&E called out half a dozen Capitola Police Officers, and kicked everyone out of the office.  The unwanted ‘Smart’ Meters were left piled up on the counter.  Late last week, PG&E sent letters threatening to disconnect power to those who returned their ‘smart’ meters on Wednesday, including a family of four with headaches and a single woman in her seventies.

The dozen residents who assembled last week outside a PG&E office just 30 miles south of Silicon Valley are the most visible part of a growing movement of people suffering from insomnia, headaches, tinnitus and other symptoms linked to smart meters- fed up with being ignored by the monopoly utilities and state regulatory agencies (who have received over 10,000 health complaints about the new meters).  Many have begun taking matters into their own hands and having their smart meters removed from their homes.   Their efforts have been bolstered by online videos showing how to do the switch, and ‘smart meter replacement kits’ are now being sold online for $49.95.  (See FreedomTaker.com)

Despite thousands of threats, not one household has had their power disrupted for refusing or removing a ‘smart’ meter in California.  According to many legal experts, utilities do not have the legal right to force a carcinogen on people’s homes.  Nevertheless, the threats continue.

Last week’s events in Capitola should send shivers down the spines of utility executives, who are facing a growing backlash against their ‘smart’ meter programs.  While investment banking and tech firms are looking forward to potential profits of $49 billion from rolling out the ‘smart grid’ worldwide- mainly through utility rate hikes- increasingly customers are rejecting ‘smart’ meters as surveillance devices, fire hazards, and as dangerous sources of non-ionizing electromagnetic radiation- what the World Health Organization now identifies as a Class 2B carcinogen.

“The ‘smart’ meter was installed outside my children’s bedroom,” says Bianca Carn resident of Santa Cruz and mother of an 8 and a 6 year old.  “Since the meter was installed, they are both complaining of headaches.  I asked PG&E multiple times to take it off- they refused.  So we hired an electrician and had it removed.”

PG&E’s ‘smart’ meters emit radiation bursts that are more powerful than wireless consumer devices and have been measured at levels that would exceed safety limits for RF exposure in much of Europe.

“PG&E does not care about health and safety and does not respect private property rights,” said Joshua Hart Director of Santa Cruz County based Stop Smart Meters!  “Threatening to turn off the power to a family who are simply trying to protect their children from radiation-induced headaches- two weeks before Christmas- is about as Scrooge-like as you can get.”

The County of Santa Cruz, all 4 municipalities in the county, and 42 other local governments throughout the state have demanded a halt to deployment because of health damage, privacy violations, and safety concerns.  At the time Santa Cruz County was “deployed” with ‘smart’ meters, a County Ordinance prohibiting their installation was in force and PG&E chose to ignore it.  According to Hart, “it appears that PG&E’s chickens are coming home to roost as hundreds are returning unwanted utility equipment that was installed illegally in the first place.”