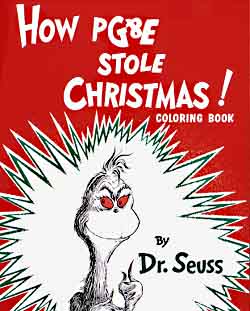 [News links follow.] Frightened by the prospect of a large scale public backlash against their stupid meter program, the cowards at Pacific Grinch and Ebeneezer have cut off power to at least 3 people in California who had been sickened by ‘smart’ meter radiation and had acted reasonably to have a safe analog meter replaced on their homes.  [UPDATE: As of 2pm, Dec. 14, three more persons have been cut off by PG&E.]

Although PG&E has a policy of not disconnecting anyone during the holidays, they made a special exception for these families.   Apparently PG&E feels it is more appropriate to force people to shiver in the cold and stumble around in the dark than simply replace an analog meter on their home (which of course they have millions of).

Seventy-five year old Peggy Lindsay, who spoke about the ‘smart’ meter’s toll on her health and returned her meter last Wednesday to PG&E- is one of those who has been disconnected.  We’re worried about her safety, living alone, having been left in the cold and dark in the middle of December.  So far, none of our ‘elected leaders’ have intervened on her behalf.

Monise and Peter Sheehan made every effort to get PG&E to work with them to eliminate the terrible ringing that had plagued their house ever since the meter went in.   PG&E refused to fix the problem, and the Sheehans took reasonable action to replace their meter with an accurate analog model.   They got home last night and their home was dark and cold.   They were interviewed by local station KION news last night. 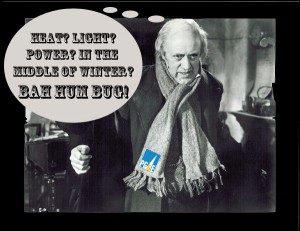 We need to be clear about this situation.   The utilities are acting like a criminal syndicate, switching off power to those suffering from their unsafe and poorly executed smart meter ‘deployment.’  They are getting increasingly nervous- and they should be.

What do we do?  The utilities are expecting that people will back down if they switch the power off.  They are expecting that people care more about their electricity and their gadgets than their ability  to sleep at night or live without headaches and tinnitus.   Having spoken to thousands of people who are suffering from these meters, I’m going to go out on a limb here and say- THEY ARE WRONG.  It is no time to back down and allow the noose of pulsed EMF to slip silently back over our heads.

If you are lucky enough to have had the foresight to lock up your analog meter before they came around, you might be reading these developments and thinking to your self, “well these people removed the meter- that’s why PG&E cut them off.  Surely I’m safe with my locks and chains or my sign- I even called the opt out line.”

I’m sorry to burst your bubble, but they want to switch off your electricity as well if you refuse to allow them to install a ‘smart’ meter- regardless of what you are reading about a possible opt out.  PG&E admits so themselves in a recent filing:

“For customers who continue to refuse to allow access to the meter, PG&E will have no choice but to temporarily discontinue service in accordance with existing Rules.”

If you still have your analog meter, make sure it is locked up and begin to make plans to live off the grid, or generate power locally with your neighbors. It’s not as hard as you think if you are willing to make a few lifestyle adjustments.

Convince your local authority- or perhaps general assembly- to take back the power and establish a municipal utility.  For now (if you are able- at least for part of the day), turn off your power at the breaker in solidarity with those being plunged into darkness.  Have a romantic candlelit dinner.   You may even feel a whole lot better in your home.

And no matter what your electrical situation is, now is the time to unite together and take care of each other- take care of your community- making sure that your elderly neighbor has enough wood and candles- perhaps a propane fridge- to make it through safely.  Our government/ utility is failing pretty miserably in this regard.

This threat is not isolated to California.  In the last few days, we’ve heard reports that more than 200 families in Minnesota who refused wireless water meters have been cut off.   Other scattered reports of disconnections from around the US have also been coming in to StopSmartMeters.Org

Let’s be clear about what’s going on here. This is an attack by PG&E and other utilities- who are owned by the 1% on Wall Street like Goldman Sachs, against the 99% whose exorbitant utility bills lead to investment returns of more than 11% in some cases.  This is when you can’t even get 1% from a savings account and many homes are being foreclosed on.

The rich are getting richer and the rest of us are left choosing between a headache and a blackout.  Welcome to 2011. 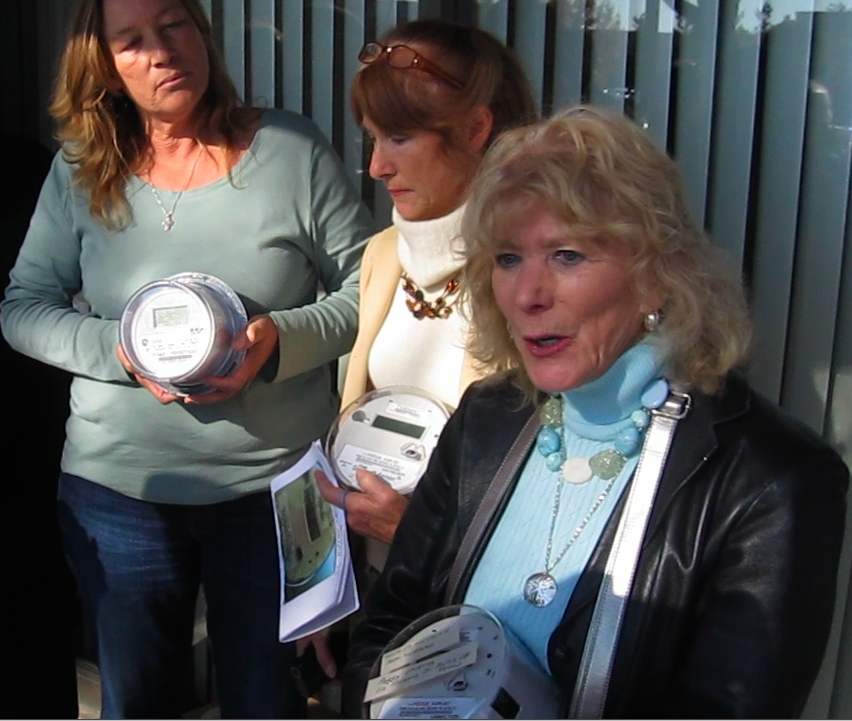 Monise Sheehan (left) came home to a dark home on Monday- retaliation for speaking out publicly about the damage PG&E has done to their health, and taking action to remove the hazard on their property. The others have been threatened with disconnection.