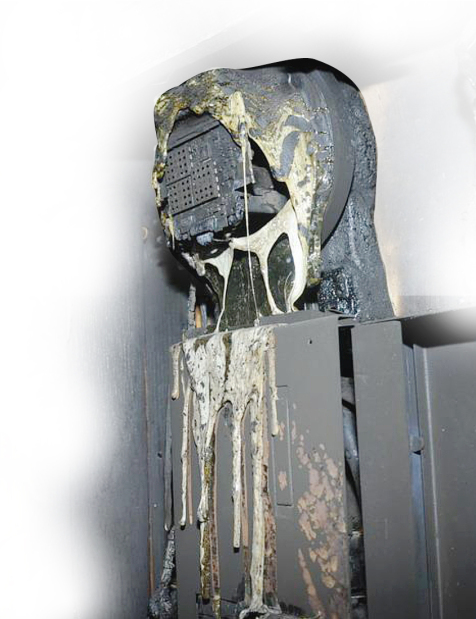 the remains of a ‘smart’ meter that caught a Vancouver home on fire last month; public alarm is growing over an epidemic of such fires.

As reported in the Baltimore Sun today, the Maryland Public Service Commission may have some tough questions for the state’s utilities tomorrow at an emergency hearing specifically looking at the issue of fires caused by “smart” meters.  Or, more likely it will be another dog and pony show assuring the public everything is alright even as people’s homes burn down, thousands are sickened and spied upon and the bottom falls out from under the smart grid.  Nevertheless, the pressure is building on regulators to actually do something for once, after a spate of smart meter fires earlier this month in Pennsylvania shut down installations by Peco Energy using Sensus meters- a company that we reported in January as having been responsible for meter fires in Alabama and the object of an employee whistleblower lawsuit alleging fire risk.  PECO is a subsidiary of Exelon Corp. a company which was just called out for engaging in “pay to play” politics with the Obama White House.  Psssst…..note to Democrats: make sure the Charlotte Convention Center has an analog meter on it- just to be safe.  You can mostly hide the threat of invisible microwave radiation.   A house burning down or a melted smart meter- that’s a little more difficult to sweep under the rug. 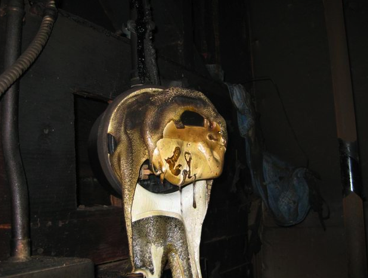 This smart meter was photographed after a fire that injured an elderly woman in San Francisco. Where is the California Public Utilities Commission? Or our “representatives”?

The photographs emerging of melted plastic smart meters have become an iconic symbol of a failing technology roll-out.  A corporate program that places profit over safety.  A symbol of how the utility industry- and the current brand of virtually unregulated capitalism in western countries- is harming people and the environment, not to mention the financial well-being of 99% of us.  Why would they build a device -through which all of the electrical current for your house flows- out of plastic that can melt and catch fire?  Even a third grader knows that plastic burns and melts while glass resists flame.   Back when our government agencies cared about safety, electrical meters were solid state, with a thick glass casing, built to last decades.  Now they are built in Mexico and China out of plastic, made only to last a few years.  While analog meters were designed to withstand  electrical surges, untested ‘smart’ meters allow surges to flow into homes, risking the safety of residents and damaging untold thousands of appliances.  Ask the utility to compensate residents for damages?  “That’s your wiring ma’am- not our meter.”  A meter that happens not to be UL listed we might add.  They eat at the banquet and we pick up the tab.

It’s not as if the industry hasn’t been aware of the problem, as documents from Edison Electric Institute in April show.  It’s just that profit has taken precedence over precaution.  For the last couple of years, as the reports of smart meter fires pile up, the task of tracking and investigating them has fallen to individual volunteers and grassroots community organizations, as agencies whose job it is to ensure public safety bury their heads in the sand.  Sadly this has included fire departments, which (to put it delicately) have not been quick to respond to the problem.

A fault with the meters themselves, or unprofessional installations (or both) have led to hundreds-probably thousands of fires and electrical problems in the US, Canada, and Australia.   People have lost their homes, and some may have lost their lives, because regulatory agencies have ignored growing evidence that there is a substantial fire risk from the new meters.  In British Columbia, a rash of recent smart meter fires including a home that suffered two successive smart meter fires has led to renewed calls for a moratorium.  In Houston, Texas a woman’s house caught fire from a smart meter, and the Fire Dept. said this was the first such instance.  An electrician in the comments says not so.   There are countless other examples. 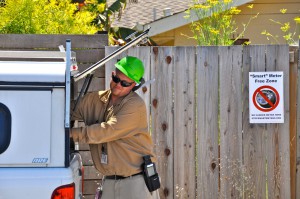 Excuse me sir, you’re going to have to leave our neighborhood.

It turns out that “Smart” Meters are a fire risk, on top of everything else.  A risk some of us are being asked to pay to avoid.   A risk that is being forced on others.  We’ll see how Maryland responds to that dirty reality tomorrow.  Whatever the regulators do, it’s become abundantly clear that we must take responsibility for the safety of our families and our neighbourhoods- ourselves.

This is no time to be polite, mind your own business, and draw the curtains.  When you see that guy in the truck roll down your street, get together with your neighbors and tell him he’s not welcome.   Bring your video camera and send us the footage. We’ll proudly post it here.

Maryland Public Service Commission will hold an emergency hearing on Tues., Aug. 28th at 2pm Eastern (11am Pacific) to hear from the utilities as to their smart meter devices and their malfunctions, power surges, and fires. Anyone concerned should plan to attend: William Donald Schaefer Tower 6 St. Paul St., 16th Floor Baltimore, MD 21202 File a dispute (410) 767-8000 MD Toll Free: 1-800-492-0474 TTY Users call via Maryland Relay 1-800-201-7165 Directions to the Commission http://webapp.psc.state.md.us/intranet/AboutUs/directions_new.cfm

The meeting will be streamed live: http://webapp.psc.state.md.us/Intranet/pscnews/video_new.cfm