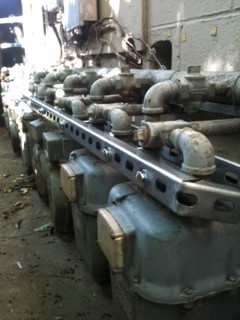 “This is how I secured the meters before PG&E illegally removed them using grinders and Sawzalls.”  Shutoff valves to the meters were easily accessible in the event of emergency

Linda and David Brauner, landlords from San Anselmo, CA say that they have not refused to pay PG&E’s fee. They say they “opted out” via their tenants, and protected their meters from unwanted smart meter installation with bands of steel and locks, both of which were destroyed by PG$E yesterday.  Following is Linda’s account: 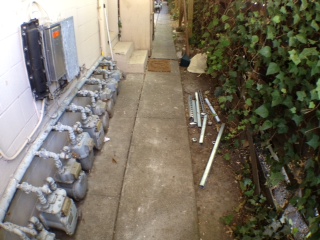 “Trucks came early in the morning, without prior notification at this 8-unit apartment building , and removed steel bars from gas meters. They used grinders and sawzalls to complete the job.”

Today, this morning, one of our tenants was shocked by noise behind her unit, as two PG&E workers were destroying the bands of steel and locks that we had installed, without calling us in advance, without notifying any tenant in the building. They apparently arrived in a huge truck with paraphernalia on it. It was clearly a “show of force”, intended to bully and intimidate.  Our tenant told my husband David, that they looked very pleased with themselves (smiling) and remarked, “He doesn’t have a right to cover up our meters” The girl then asked them if they were going to install smart meters and they replied, “No”. Whatever that is worth.

By the time my husband arrived, the PG&E had trespassed, vandalized, invaded our privacy and violated our tenant’s right to private enjoyment, and left the scene.

While my husband was on the way to San Anselmo, I called the Independent Journal (daily newspaper in Marin County), spoke to the City Editor, Robert Sterling, who sent both a reporter and photographer to the building. David said they took over a hundred pics and interviewed him and asked for our tenants contact info.

We called the police, waited 45 minutes and finally went to the station, two houses away from the building. Although they did file an “incident report”, which entailed documenting David’s report, in their opinion, “It is a civil matter, between PG&E and you.” 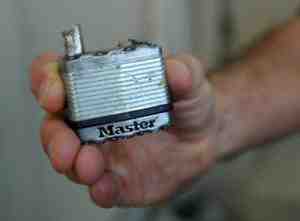 Astounding that these men, nothing more than a couple of thugs/bullies,  are allowed to create an atmosphere of terror in our lives and the lives of our tenants, leaving a wake of destruction of our personal property behind them.

Meanwhile David has called the police to file a police report on defacing property and vandalism, trespass.

PG&E has an easement to service meters not to destroy property.