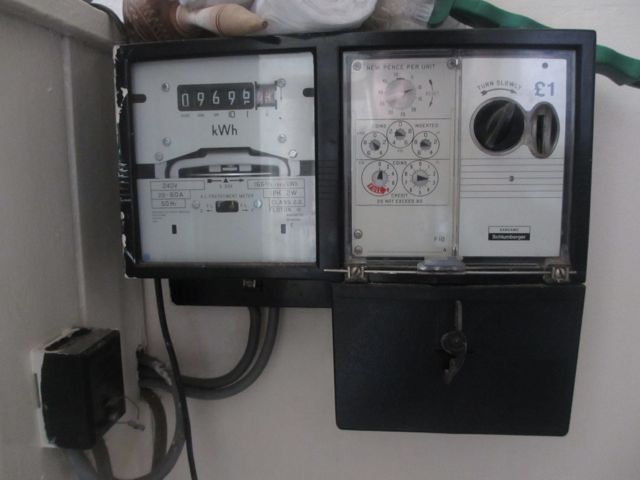 This analog meter installed inside a home in Bristol, UK, is fitted with a coin activated pre-pay meter, an attempt by utilities to avoid students moving out and not paying their bills.  Meters in the UK are typically located inside the home, providing a practical advantage to resist smart meters- just don’t answer the door.

Smart meters are now being installed in the UK haphazardly, house by house without the regimented deployments that have riled neighborhoods in the US, Canada, and Australia.  The UK government has delayed the systematic roll-out of smart meters but still claim they will be in every home in the UK by 2020 (though of course they have no legal mandate to force them on private property as elsewhere).  The UK government claims that the meters are voluntary but Big Energy is duping customers into believing that they are mandatory.

Energy companies are keen to avoid the kind of public relations disasters that have engulfed and derailed smart meter programs elsewhere, planting misleading propaganda into British newspapers, and trying to make the public believe these stupid things are really necessary.  Serious doubts have been raised by our UK counterpart StopSmartMeters.Org.Uk at the parliamentary level about the wisdom of such a scheme. (see video below).  Shortly after SSM UK’s testimony, the Dept. of Energy and Climate Change announced a yearlong delay in the program.  A detailed report on the UK’s smart metering scheme that includes opposition testimony can be found in pdf form here.

It’s not that British energy companies are so much kinder and gentler than in the US.  It’s that they know if they behave like thugs and disconnect people who have paid their bills, the British public will simply not tolerate it.   People in the UK are aghast when I tell them that the local power company in the US cut off our family even though we pay our bills.   They shake their head and say it could never happen in England.  People just wouldn’t allow it.

Perhaps this community spirit is left over from the blitz in WWII where Londoners had to hide in Underground stations to avoid German bombs.   The National Health Service (NHS) emerged from this trauma and the British would not tolerate its loss (though an ill-advised privatization scheme is being hotly debated, and ushered in through the back door at the moment).

Energy companies have been targeting low income families around the UK for smart meter deployment, according to Mike Mitcham of Stop Smart Meters UK.  Being able to remotely disconnect these households is one major benefit to the utilities.  Energy companies are also promoting “smart” meters as a solution to energy poverty – a little like promoting high interest loans as a solution to debt.

The grassroots movement against smart meters in the UK and elsewhere continues to grow.  Walking around London I have seen SSM UK posters in people’s windows, so it is clear the word is getting out.   Can the utility companies sneak these radiating spy meters into people’s homes before they grasp what is at stake?  It remains to be seen.   Bottom line here is that if communities get aware, then organize and refuse, we have the power to take on even the biggest corporations.  We just have to believe in- and take back- our own power.