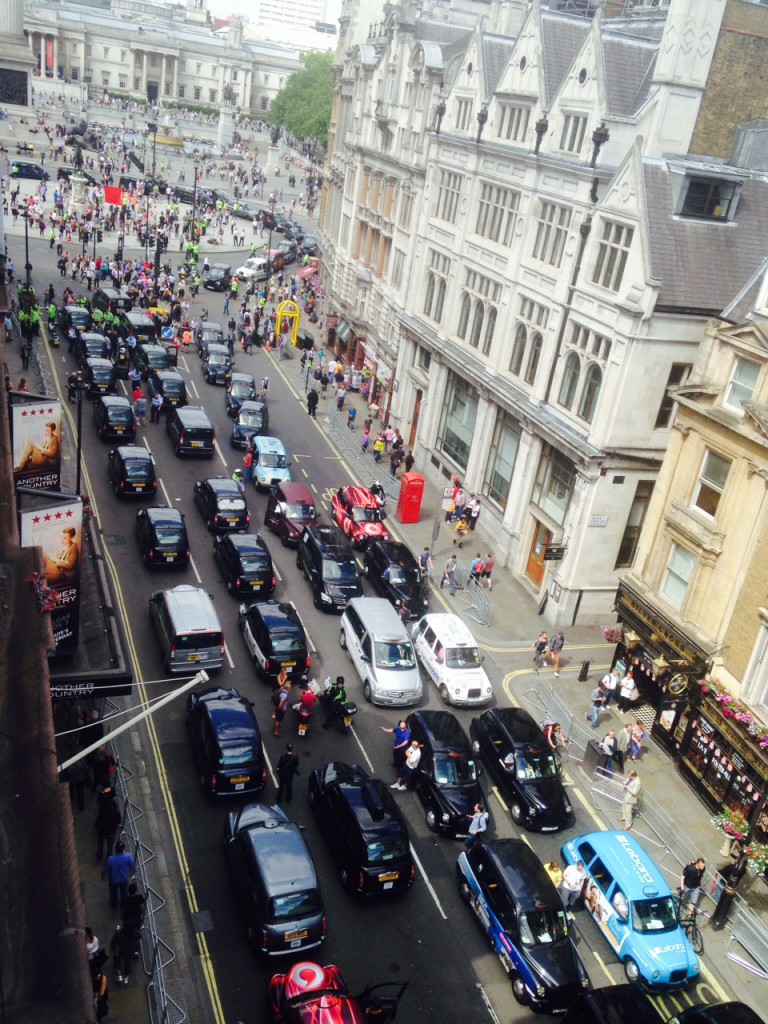 London’s cabbies are all atwitter over smart phone app Uber

I’m still in the UK giving talks, meeting with our allies, and spending time with family and friends,  planning to return to the US in a week via cargo ship.

Here in London, on Wednesday, the center of the city was gridlocked with more than 10,000 honking (hooting) black cabs.

Tourists wandered around perplexed as to what the fuss was all about.

The fuss- which has been building for months and on June 11 saw simultaneous taxi driver protests in London as well as Berlin, Madrid, Rome, and Paris- was in response to the transportation corporation and smart phone app Uber- which has come under fire for its predatory approach to the transportation market. In San Francisco where the firm is based, an Uber taxi driver with no commercial license and distracted by his smart phone ran over and killed a 6 year old girl on New Year’s eve last year.

Such deaths and injuries are becoming more frequent on SF’s streets, possibly the result of a deadly combination of dependencies on motor vehicles and smart phones.  A combination that Uber is capitalizing on, encouraged by regulators who don’t mind sacrificing human life under the wheels of a car or at the tip of a smart meter microwave antenna if it will make millions for their investor pals like Goldman Sachs.

A wrongful death lawsuit by the girl’s family has been filed against the company.

“Under the guise of a progressive-minded “sharing economy,” rich companies like Uber, Airbnb, and Taskrabbit are dissecting work into smaller, discrete tasks—a way to evade regulations that once protected workers, and to saddle workers with costs and risks that employers once covered.”   More here.

Facilitating the emergence of Uber in California was the same compromised state agency that brought us the smart meter- the California Public Utility Commission, chartered by the state’s constitution to make utility and transportation services reliable and protect the public’s health and safety but instead doing the opposite, using your tax dollars to bore the hell out of you and then when you’re not paying attention, take your money and your health.

And it’s the same story in many states and other countries.

The stress of keeping up a normal edifice of an institution rotten to the core is evidently getting to CPUC President Michael Peevey.  He recently lashed out at an attorney representing the public who was asking too many tough questions, yelling “I’m not here to answer your goddamn questions- now SHUT UP!”.  Actually Mr. Peevey that’s precisely why you are here.

The world seems dizzy with the euphoria of “smart” wireless technology- the internet of things- the cloud and promise of constant connection.  Like any drug, there is always a downside and the other edge of the sword is becoming increasingly apparent. One of these days we are going to wake up with a massive smart hangover- and unfortunately there is no app yet devised that will cure that headache.

Whether or not London’s taxi drivers are aware of it, they are part of a global backlash against smart technology and tech abuses that has blockaded smart meter installation trucks, buses carrying employees to Google and Facebook, and protested gentrification and forced relocations in the San Francisco Bay Area and elsewhere.

This is not just about the individual phenomenon of smart meters or app-based taxi networks but a wholesale corporate harvesting of our essential systems- our transportation networks, our water, gas, and electric utilities, accommodation and our communications infrastructure.   These systems we depend on generate obscene profits for the select few who have little regard (and often outright hostility) to concerns about how new policies and technologies will affect society or the rights of individuals.

In the case of the taxi industry, how will the growth of Uber affect the quality and safety of transportation in cities around the world?  For those who choose not to use (or can’t afford or are sensitive to the radiation from) smart phones how will their transportation choices be affected?

One can imagine a not too distant future where you are standing on a street corner in a busy city needing to get across town with hundreds of empty taxis (with drivers and without) passing you by because they haven’t received a request from your smart phone.  You vainly put your hand out but no one pays attention.  The machine rolls on.  In Uber’s world, using your hand to hail a cab is unacceptably obsolete and unbearably analog.

Even though it works.

“Smart” is deaf to human cries of pain or protest unless they are translated into the comfortable and sterile left brain language of ones and zeroes.

Such technologies promise convenience and connectivity, but the reality is that they:

What do we risk by simply going along with this agenda?

A future where if you don’t “choose” a radiation pulsing smart meter on your home then you can “choose” to live without electricity.

A future where your children are deprived of education unless you pay a large amount of money or allow them to be bathed in carcinogenic radiation all day.

A future where unless you are willing to blindly jump headfirst into “the cloud” without hesitation, you are ostracized and ridiculed, fined, harassed, interrogated, and arrested.   Basically turned into a second class citizen.

A future where our valuable wired and analog public telephone network is dismantled and copper wire sold off, making our communications system as unreliable and poor quality as the electricity from the newly vulnerable “smart” grid that services like Skype depend on.

Such worrying future scenarios are looking increasingly like the present.

It’s one thing to make the mistake of drifting into such a future through blind obsession with technology- it is quite another for us to allow so-called political “leaders” to do so without public input or debate. Especially when the warning signs are all around us.  It’s downright Orwellian.

“Smart” progress is no progress at all.  It is a regression to a new dark age, a diminishing of quality in favor of quantity, a boring corporate utilitarian view of the world that makes our lives duller, shorter, and more expensive.

We can use wise technology in a way that empowers people and improves our quality of life but sadly that is not the current trajectory. It is up to us to change direction.

European taxi drivers found their voice this week and made it clear that some arrogant American company cannot so easily cross the pond and disrupt a system that has worked well for decades.  Uber has tried to spin the protests as luddites acting out- the same argument that has been used against smart meter protestors.  It didn’t hold water then and it doesn’t now.    Expect global grassroots protests to swell as the toll of this multinational “Smart” agenda grows.

Eventually, like so many bubbles before, it will burst.  Rather than worrying about how to stop it from growing, maybe we should start talking about how to pick up the pieces and move forward after its inevitable demise.