CPUC Hangs PSREC’s Marshall Out to Dry in News Article 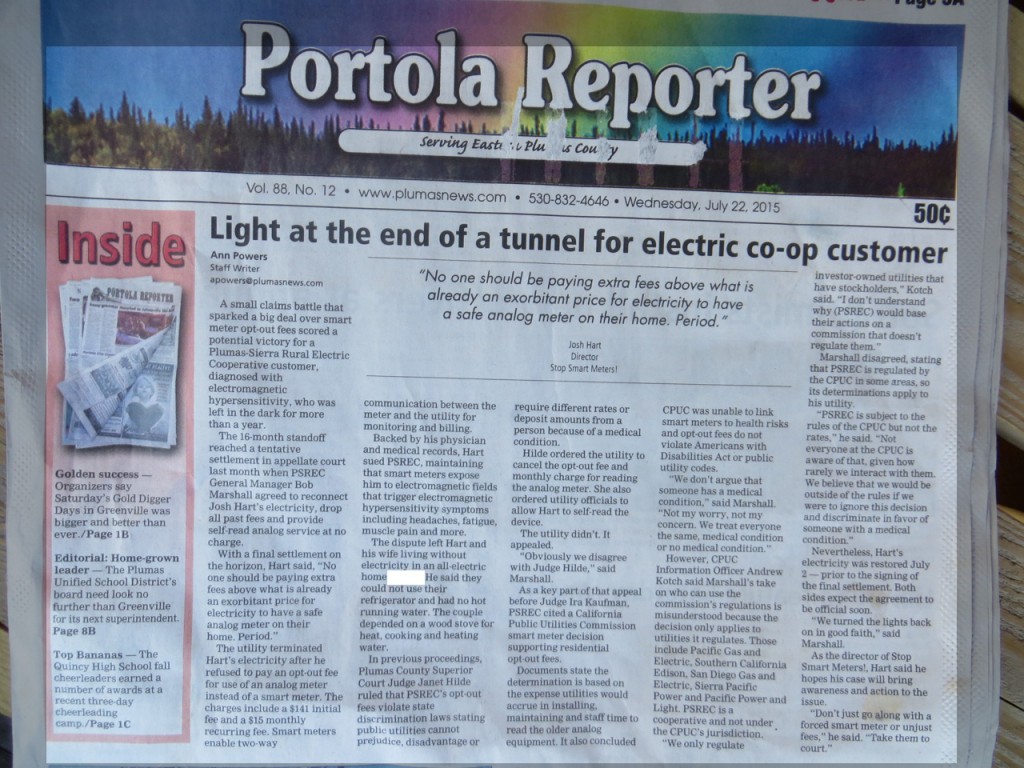 Yesterday’s front page article in the Portola Reporter about our case revealed the fact that the California Public Utilities Commission (CPUC) is increasingly distancing itself from the legal debacle that PSREC brought upon themselves when they illegally disconnected our electricity on Feb. 19th, 2014.

This is certainly a change of tune from a CPUC response to a legislative request soon after our disconnect, when they proclaimed that PSREC was fully within their rights to disconnect us. It’s clear they don’t want our victory here in Plumas County to “infect” the rest of the state and its millions of investor-owned-utility (IOU) customers, though laws like §453b (prohibiting charging more to people with disabilities) and §451 (prohibition of charging more to protect safety) are equally valid elsewhere in the state. Thus it was that the CPUC hung Mr. Marshall out to dry in this week’s local paper, simultaneously undermining PSREC’s entire legal strategy.

Bob Marshall claims that he restored our electricity “in good faith.”  Why then couldn’t he have used that “good faith” to turn on our electricity when he received a (second) doctor’s letter in June 2014 that my wife was home alone for weeks with an injured arm and couldn’t even carry water from the stove to the sink, and that her temporary disability required that she have the electricity needed to cook and shower?

The truth is that PSREC turned on our electricity only under pressure from a superior court judge, and to avoid further facts coming out that would embarrass them publicly.

Here in Plumas County, wealthy people with long driveways are given analog meters that are less risky to health and less of a fire and explosion risk, and they are permitted to self-read these analogs at no extra charge.  Meanwhile PSREC is continuing to attempt to charge the rest of us a significant fee for the same service, and to avoid the riskier meters.  PSREC needs to drop the fees altogether and provide analogs at no charge to anyone regardless of the reason. If they refuse to do the reasonable thing, people should take them to court. After all, their policy is built on very shaky legal ground, as the CPUC themselves have confirmed.