Nowhere to Escape from “Smart” Meters 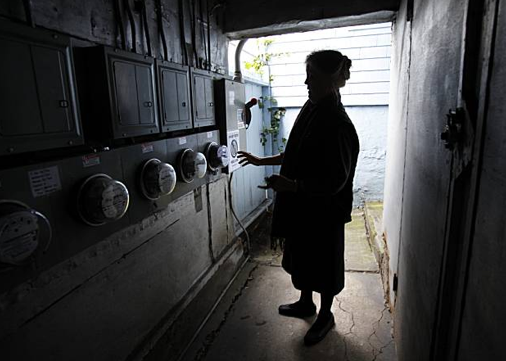 One woman's struggle with health impacts from her 'smart' meter

We received this heart-wrenching account from a woman living in San Francisco, and her battle with PG&E.  Unlike many other people who have demanded removal of a ‘smart’ meter due to health impacts, she was successful at getting the besieged utility to remove her meter.   Despite this, she is still struggling with the lingering effects of being exposed to the radiation from these meters.  Here is her account:

Toxic Exposure from only one SmartMeter 7 feet below my bed for 3 months
Though I never was electrically sensitive before, an extreme exposure
to Electro Magnetic Frequencies (EMFs) from just one of PG&E’s digital
SmartMeters, (from 10/31/09 to 3/3/10), left me as an electrically
sensitive person. Along the way, the experience of dealing with PG&E
to take the SmartMeter out was truly creepy. Now, a year after the
SmartMeter was removed, 30% of the symptoms still rule my life.

Here is the sequence of events: In early December 2009, I began
experiencing nights of fitful sleeplessness. I soon had less and less
energy in the day time. I began having localized headaches and worried
why I was constantly a bit dizzy. In January the dizziness became
worse and I began feeling very oddly ‘spaced out’. I began having
strange strong cramps in my legs at night that woke me up. My eyes
were constantly extremely itchy and incredibly light sensitive, often
with strong pains in my right eye. My normal mild tinnitus was far far
worse. Also my familiar chest pressure and pains were far more
pronounced and far more often. I had no idea these things were
related. At first I just felt guilty I had allowed myself to get so
out-of-shape that I could not find a solution to the horrible
insomnia. By January I had such serious memory problems I often could
not remember what I was doing from one minute to the next. I would
find myself standing still, staring into space, and vaguely realizing
that something must be wrong with me. By February, when speaking, hard
as I tried, I could not remember the most common words, and was
spelling words phonetically. Also, the stutter I had as a child began
to return.

By the end of February I realized I was becoming more and more dizzy
as the days went by. One day I was so dizzy, I literally could not
walk and was actually staggering. Also, by then, I frequently saw in
the mirror that my face was Bright Bright Red. And since I had no
feeling of being hot, I finally knew something was really very wrong
and that the cause was not insomnia. But I had absolutely no idea what
the cause could be. It is only because of two purely chance incidents
that I discovered the cause was just one SmartMeter seven feet below
my bed.

In January and again in February a friend using my garage as a theater
rehearsal space, twice came upstairs to the apartment to tell me that
as a person who rarely got headaches, he could not figure out why
lately whenever he was in the garage he would get horrific headaches.
But, as it turns out, he had been sitting and standing about ten feet
from the SmartMeter.

Through this whole experience, there were two ambulance trips to the
emergency room for racing heart. Both times at the onset I was in no
stress whatever. When the pills that are supposed to slow the heart
rate down did not work, I had no choice but to call an ambulance. Both
times, at the hospital, my heart checked out just fine. The first time
was before the SmartMeter was taken out. The second ambulance trip to
the ER was one morning 6 weeks after the SmartMeter was taken out. I
had been sitting for a few hours at my desk 25 feet from a power pole.
This was the day I realized that even though the SmartMeter had been
taken out, it had left me as an electrically sensitive person and I
could no longer use that office or enjoy that roof garden as I had
for the past 30 years.

For this whole past year since the SmartMeter was taken out, I have
had to completely interrupt my cultural-exchange business and personal
life to only focus on finding ways to shield myself from EMFs. Every
day is a fight. It is serious stress. I am on constant overwhelm.
Lately the symptoms are worse again. The strange leg muscle cramps are
waking me up again at night. In this past year I have lost half of my
hair. The tinnitus is worse and worse in just the last few weeks.
There are fewer and fewer places I can go, out of the house, to avoid
EMFs that do not make the Tinnitus worse. I worry a lot about cancer
and the health of my neighbor’s children. And I know there is no
where to escape to.

This entry was posted in Health studies, PG&E, San Francisco. Bookmark the permalink.

1 Response to Nowhere to Escape from “Smart” Meters