Shame on You Grandpa 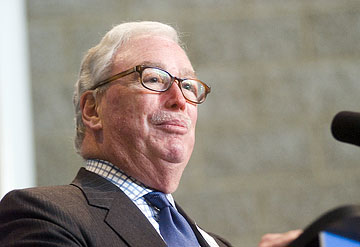 Michael Peevey is the President of the California Public Utilities Commission, the body who is continuing  to authorize forced installations of dangerous ‘smart’ meters throughout California, despite evidence that they are seriously injuring people.   Peevey is a former chief executive of Southern California Edison, one of the utilities that the CPUC is meant to regulate.

Shame on You Grandpa

Good Morning Mr. Peevey. George Orwell had you and the industry you purport to regulate beat by 62 years. His book Nineteen Eighty-Four was published in 1949. If you haven’t read it, you really should. If you read it in high school or college, you may want to pick it up and read it again. It told of the future you are creating for yourself and us, your wife, your children and their children. You are leaving behind a legacy of terror Mr. Peevey.

The decisions you’re making now are probably the most crucial decisions you’ve ever made when it comes to how they will affect the lives of not only this generation, but the lives of generations to come. Albert Einstein said “It has become appalling obvious that our technology has exceeded our humanity.” Such is the case here and I’d like you to take a hard look at that irrespective of the expectations of an industry to which you’ve become Godfather.

Besides being President of the CPUC, you’re a husband and father of three children and a grandfather and I’m sure that means a lot to you. I’m not prying but I am curious to learn a little about the man behind the desk.

I’m speaking to Michael Peevey the father and Grandpa. I’d like you to consider what kind of world you’re leaving behind for those you love. It’s hard to believe that in your heart of hearts given what you know and the facts that surround you, that you would commit your loved ones and the good people of California, indeed the fine people of this country to a faulted technology fraught with hazards.

According to medical reports such as the physician’s peer review of the California Council on Science and Technology on the health impacts of Smart Meters, these devices have been found to cause brain tumors, tinnitus, acoustic neuromas, childhood leukemia, neurodegenerative diseases, DNA damage and cognitive impairment. Smart Meter radiation slows motor skills, reduces learning ability, heats body tissue, lowers the immune system and does damage to the blood-brain barrier that prevents toxins from entering the brain. Even if only half of this were true, what kind of a Grandpa would protect an industry that shows such little regard for public health and safety?

At the CPUC meeting March 24th, PG&E and their attorneys took over 75 pages to say Show Me the Money. Oh they said it in legalize, the language of champions but let’s be completely honest Mr. Peevey. It’s about the money. Money is driving this; the agenda, this rollout, this rush to deploy. This skullduggery. It’s about money and greed and power.

Not green power but the power that’s wielded over a citizenry stripped of its rights and that you would see buried to meet deadlines and increase corporate profits while leaving us in the rubble of PG&E’s twisted machinations. It’s about how our money finds its way in to a utility company’s pockets which should come as no surprise to anyone because what isn’t about money these days whether it’s lobbying money or laundered money or campaign funding or pork barrels or bailouts? It is and always has been about the money.

It’s hard to believe that you would defend an industry that pretends to be green but is green only as in the color of money. Is there anything that you, the Smart Grid Industry, the CPUC and PG&E would NOT do for money Mr. Peevey?

Any good salesman or politician can tell you that if you want to sell something, give it a good name like Smart and make it the “green” thing to do.  Don’t get me wrong. I’m as environmentally conscious as the next one but the Smart Grid movement is not about going green or conserving energy or reducing greenhouse gas emissions or saving Polar Bears. It’s about raising rates, increasing profits and selling the data it collects. The utility companies aren’t doing this for your health or for the environment.

We hear a lot of talk these days about the need for transparency as if it’s so hard to see through what’s going on so I’ll just come right to the bottom line. Mr. Peevey this is your chance of a lifetime if you take it to be a real hero for your children and their children, for California and for America. You will either be remembered as the man who set fire to our freedom and watched it burn or who ran in to the burning building and carried us out.

3 Responses to Shame on You Grandpa