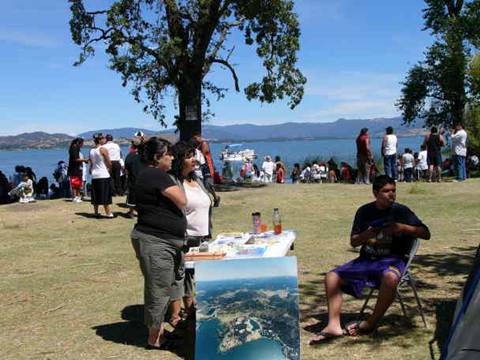 The count is in.  The Big Valley Rancheria/ Pomo Band of Indians in Lake County last month became the fortieth local jurisdiction in California to demand an immediate halt to ‘smart’ meter installations.  The full list is under the “How you can stop smart meters” tab on the menu bar above (or click here).

Eight counties, 31 cities, and now the Pomo Indian Tribe- representing 2,242,123 people (according to US Census data) demand that utilities stop installing ‘smart meters’ due to immediate and urgent concerns about health damage, privacy violations, fire hazards, and a host of other problems that PG&E is just beginning to admit to, like the fact that ‘smart’ meters that were found to sort of ‘speed up’ when it got above 100 F.

People are particularly enraged in Lake County.  The Board of Supervisors is pursuing a legal injunction against PG&E, and Supervisor Anthony Farrington recently joined us in calling for a halt at a major forum in Santa Barbara on the topic.  Now the Pomo are joining the fight declaring smart meters illegal on their entire Rancheria.  Plus Kelseyville’s Howard Glasser has been typing up powerful and hard hitting criticism of the utility and CPUC President.

Don’t mess with Lake County in other words.

Large areas of California and millions of people are standing up and saying that these ‘smart’ meters have a problem and they are making people sick.   How much longer can the state and federal governments and the utilities remain in denial, pretending that there is no problem, or being vague and offering false unworkable solutions?  The smart grid dream is turning into a smart meter nightmare for millions of people as they wake up to the horror of being forced into a life of electrosensitivity in a culture still in denial that the condition even exists.  (It does.)

Tell the CA Public Utilities Commission where they can put their smart meters this Thursday May 5th in San Francisco.   Full calendar and meeting details here.