We’re excited to be able to bring you video of the major ‘smart’ meter forum held on April 28th at Fess Parker’s Resort in Santa Barbara, organized by the Santa Barbara Tea Party and other community groups.  Thank you to Ecological Options Network (the all-seeing eye of this movement) for your excellent coverage.   Stop Smart Meters! Director Joshua Hart was honored to be a panelist, and we are grateful to have been given the opportunity to report on the damage that PG&E’s meters have caused to date and to warn Southern Californians.

Over 300 people attended this hugely successful event, which has sparked a burgeoning movement against ‘smart’ meters in Southern California.   So much so that Southern California Edison has now started calling their ‘smart’ meters “automatic electronic devices”  to try and avoid the public relations disaster that PG&E finds itself in up north.  Hey SCE- you can put lipstick on a pig but at the end of the day- it’s still a pig.  (No offense to pigs, who are actually quite lovely intelligent animals.)

Thank you so much to the organizers of this event and for all those people working to build grassroots public awareness of this threat, in spite of the best efforts of the utility and telecom industries, bought off “scientists,” and (for the most part) a complicit mainstream media.

In my 40-odd years of attending professional meetings where presentations are made by a panel of experts, the recent event sponsored by the local tea party and Culpepper Society on the smart meter problem was a special and outstanding example of what a community meeting should ideally be like.

First, the large audience was completely engaged. That was because each speaker had not only wide knowledge and a firm understanding of his or her special contribution to this topic, but were lucid, superbly prepared and articulate. This is unusual because even brilliant academics often are unable to convey their knowledge with anything like the acumen of this group.

The problem discussed is of utmost importance not only due to its economic impact on electricity users, but because it raises the likelihood of important and adverse effects on health. In my opinion, the possible health risks posed by so-called smart meters require the kind of informed consent that’s legally required before we permit any intrusive medical procedures, even when the possibility of harm is almost non- existent. Therefore, the scientific literature on this issue will require continuing scrutiny.

The problem of intrusiveness by public utilities with the help of the Public Utility Commission also is a challenge to privacy and private-property rights, and illustrates well the kind of over-reach by big government and quasi-governmental agencies that is causing the current rebellion against the nanny-state mentality. 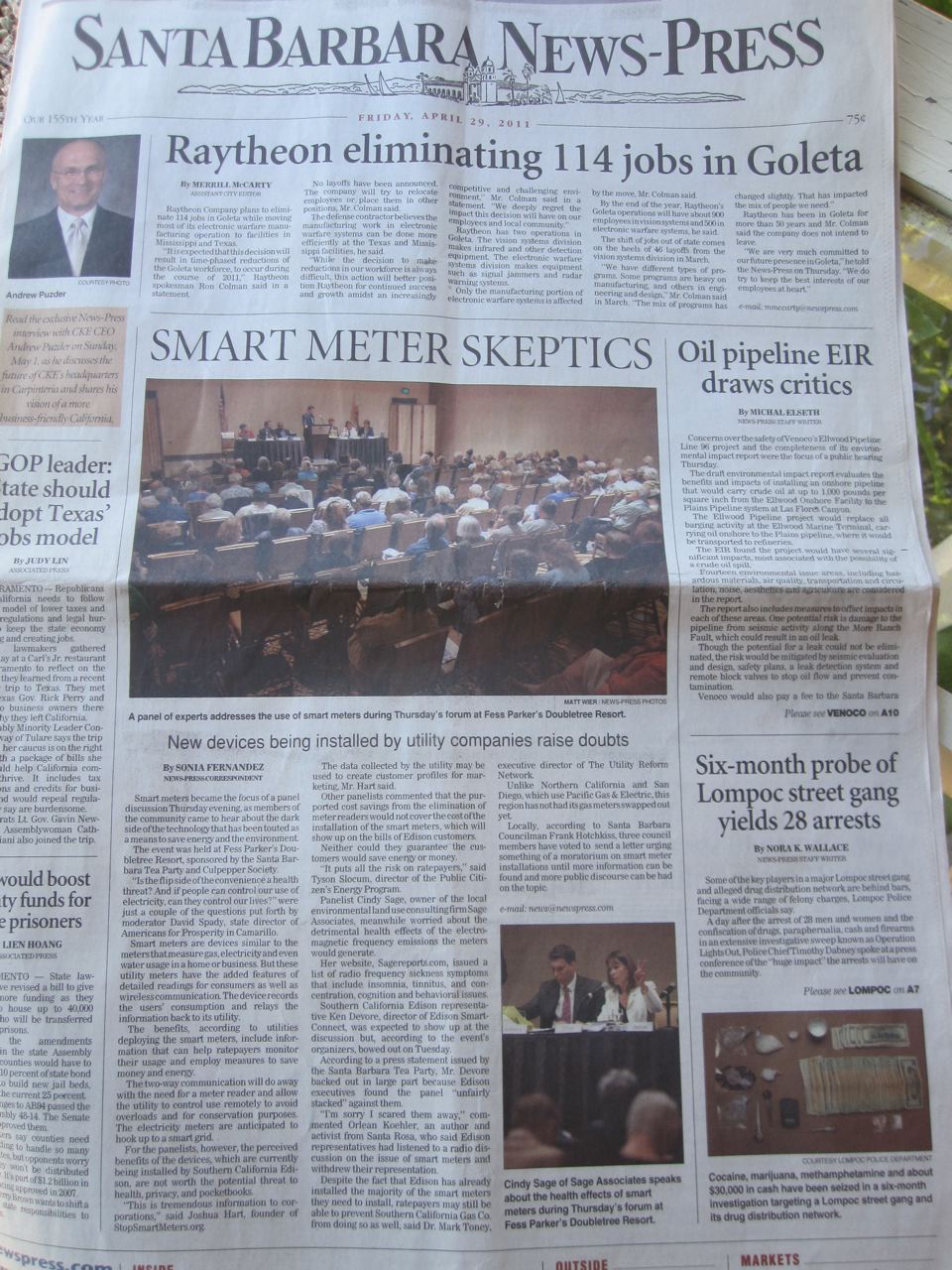 Remember, Stop Smart Meters! is a grassroots funded project.  We depend on your contributions- both large and small to keep the fires burning.  Whereas mainstream environmental and consumer rights organizations are (generally) just as deep in denial as the industry and governments, we are small and nimble and not beholden to anyone except for you!  If you can afford it, please send us a check today.  It makes a big difference.  See our donate page for more details.  Thank you!