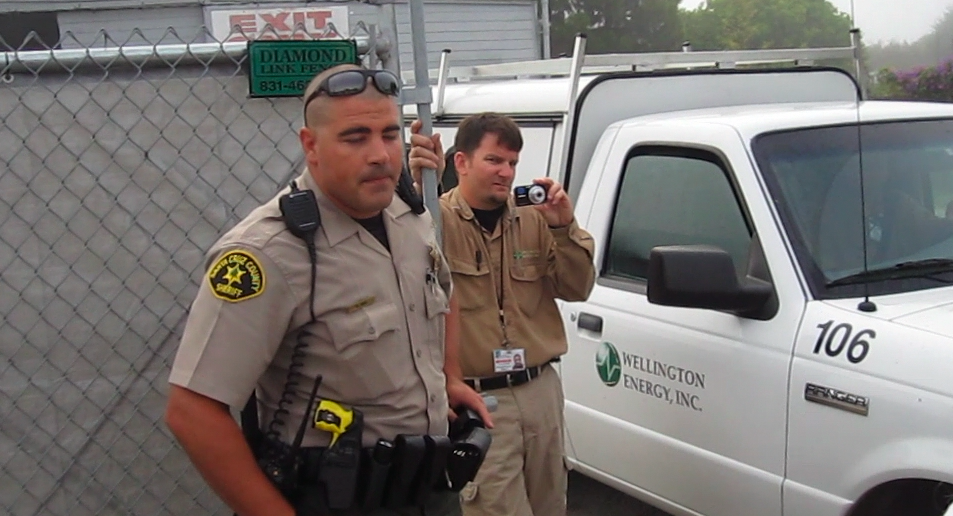 Santa Cruz, CA- This morning at approximately 7:45am, Santa Cruz County Sheriff’s Deputies responded to a “smart” meter protest at the Wellington Energy yard at 38th and Portola in the unincorporated Opal Cliffs area of Santa Cruz County where PG&E contractors Wellington Energy are based.  Wellington has been installing wireless “smart” meters throughout the county, violating ordinances in Capitola, Watsonville, and the County[1] that prohibit installations due to urgent concerns about health impacts from the meters’ wireless pulses, which have been measured at 100 times the strength of a cell phone[2], as well as privacy violations, ongoing accuracy issues and a series of fires and explosions caused by the new meters.

Thousands of people have submitted written health complaints to the California Public Utilities Commission (CPUC), and in May the World Health Organization made an earth shattering declaration- that non-ionizing radiation from cell phones, cell towers, wifi, and “smart” meters, has been linked with a number of cancers.  “Smart” meter radiation is now categorized as a class 2b carcinogen in the same cancer causing category as lead, DDT, and engine exhaust.[3]  Nevertheless, PG&E continues to maintain that their meters are safe.  The utility has been citing the World Health Organization’s past reassurances in their public statements.  Now, they are no longer referring to the health issue at all, as no independent health organizations will back up their reassurances of safety.  Instead, they recently mailed a 4 page glossy brochure to every household in Santa Cruz County, stating that “smart” meters will “cool the planet” despite PG&E’s own admission that the program has not reduced a single kwh of energy use despite more than 80% of the meters already being installed throughout California.[4]

Wireless “smart” meters have been widely reported to cause headaches, dizziness, ringing in the ears- even memory loss and heart palpitations among susceptible individuals due to the constant bursts of microwave radiation- estimated at more than 22,000 per day.  The movement against “smart” meters is the sharp end of a growing movement demanding health-based standards for wireless technology.

Joshua Hart, Director of Stop Smart Meters! spoke of the shock and dismay from members of the public who witnessed the sheriff essentially enabling PG&E’s illegal behavior: “Imagine calling the sheriff to report a burglar in your house.  The sheriff responds, but instead of arresting the burglar, he arrests the homeowner for getting in the burglar’s way, thus facilitating the theft in progress.  That is exactly how Sheriff Wowak is behaving, allowing corporate criminals to violate the law with impunity.”

Despite decisive action taken by the Santa Cruz County Board of Supervisors in passing ordinance 5084 on January 11 2011 prohibiting “smart” meter installation, and a letter from County Counsel Dana McRae indicating that county law enforcement would enforce the law, Sheriff Wowak appears to be giving PG&E a free pass to inflict their dangerous smart grid debacle onto an unwilling public.

Three arrests of “smart” meter protesters have been made over the last month in Santa Cruz County, and protesters say they will continue protests and civil disobedience until the County Sheriff acts to prevent further installation.

A number of conflicts were reported in neighbourhoods throughout Santa Cruz County on Thursday between Wellington installers and residents, and protests are expected to escalate as angry residents come home to find unwanted “smart” meters forced on their homes.

An emergency protest is scheduled for Thursday morning July 21st at 7:30am at the corner of 38th and Portola in Opal Cliffs, Santa Cruz.  Members of the community are encouraged to show up and demonstrate their opposition to Sheriff Wowak’s policy of non-enforcement of County ordinance 5084.

Save the Date: A Town Hall Meeting to discuss the “smart” meter emergency is scheduled for August 3rd at Louden Nelson Center in Santa Cruz.  More details to come.