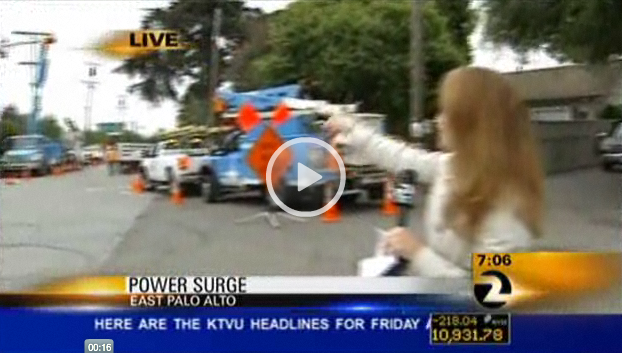 KTVU Reporter on the scene in E. Palo Alto where 'smart' meters popped on Aug.25.

Reports were coming in yesterday of a major power surge that left more than 200 without electricity and burned out appliances and wiring in East Palo Alto, a low income community in the San Francisco Bay Area.  Many of the affected homes were in apartment buildings, where clusters of the new wireless meters have recently been installed.

The power outage affected 10 blocks and started after 9 pm Thursday night, with
400 volts of electricity surging through homes, rather than the usual 110 volts, according to PG&E.  Residents reported loud bangs, pops, glass shattering, TVs blowing up, lines sparking, smoke, lightbulbs exploding, and other electrical problems.

PG&E tried to blame it on the trees, but fire officials warned residents not to turn their electricity on until the smart meters are inspected.

Now no one is sure what caused this incident- let’s make sure we don’t jump to conclusions here, but new readers on this site should be aware that ‘smart’ meters are not UL certified, have been linked with numerous fires and electrical explosions, and that a fire that burned the Santa Rosa Mall in April appears to have been caused by ‘smart’ meters and then covered up by PG&E.  Whistleblowers who worked for Wellington Energy- PG&E’s ‘smart’ meter contractor- have alleged unsafe installations that have led to arcing, which certainly could have caused this incident.

If anyone has further information about this incident, please post it below in the comments section.