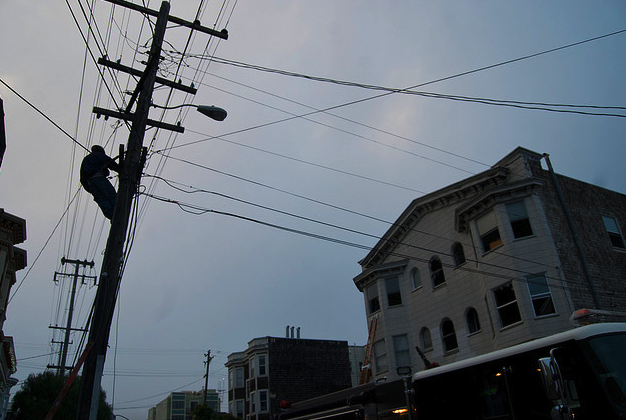 Yes that’s right.   It’s Labor Day, and we would like to take this opportunity to appreciate the utility workers who keep the lights on for us, who brave difficult and dangerous conditions, and are often caught between authoritarian executives out of touch with reality and an increasingly hostile public who associates them with a ‘smart’ meter program gone horribly wrong.   Of course it’s not the guy up a pole who is making decisions about what level or radiation is safe for your children- those are the utility executives whose broken moral compasses apparently all point straight to the bank.

We’ve met a good many utility workers- meter readers, operators, maintenance workers- who are becoming alarmed at the way their companies are behaving.  The coming of the ‘smart’ meter means the loss of thousands and thousands of meter reader and support positions at a time when that’s the last thing we (or they) need.  Workers are losing their jobs now because utilities are trying to cut every expense and direct these funds to shareholder bank accounts.  That is where blame for this forced deployment should be directed- not at the guys in the blue trucks.

Having said all that, anyone who is employed to install ‘smart’ meters needs to check their conscience, given the harm that has been documented.    There are ‘smart’ meter installers who are undoubtedly good people and just don’t realize what they are doing, or haven’t researched the truth for themselves, believing what their bosses tell them.  In spite of that, the word is getting out.    Utilities are being forced to pay $50/ hr to installers in CA-  and they have to pay that because no one wants the work- no one wants to be yelled at and run out of a neighborhood and to try and sleep at night knowing you are radiating entire neighborhoods.  There are reports of truly gestapo type intimidation tactics on the part of installers, particularly in Texas, where reports of assault and forced installations have been reported (more to come on this).   However, the fact that utility executives and compliant legislators deserve more of the blame for these despicable tactics does not entirely excuse the individuals who were “just following orders.”

The following was sent by Toby and Ellen Cecil, who manage a 70 unit apartment complex in Marina, CA which they have been bravely defending from the ‘smart’ meter deployment.   The other day they had an illuminating conversation with a PG&E employee, and they wrote the following:

“The power company employees are–in our experience and for the most part–intelligent, hardworking people who have problems and needs just like you and we do.  They are working to put food on the table, gas in the tank and to make mortgage/rental payments just like the rest of us.

From our personal encounters over the past 6 months, we have learned that the PG&E employees are in meetings with the higher-ups where they are being fed disinformation in spades whilst being desensitized to the civil rights of others.

PG&E is committing, in our humble opinion, the “sin of omission” by NOT telling the whole story to their employees.

PG&E employees have the right to know the truth so they can search their consciences to see if they can live with themselves–hitting the pillow at night without guilt–knowing full well that they are bringing harm to their neighbors and their own families.

Another technician/field worker who came to our complex six months ago told us that in a big, important PG&E meeting, the employees were told, “Oh, well, if a house or two catches fire from a Smart Meter then that’s too bad.  That’s only a couple of houses.”

But what if that is YOUR house?

The PG&E employee we spoke with today knew nothing about the HAN (Home Area Network) and possible household rewiring due to the potential overload and subsequent fire hazards; the suspicious fires; health consequences of  RF; quadrupled plus bills; the fact that microwave is a military weapon and that these digital monstrosities are being called “Spy Meters” because that is what they are and that is what they do, i.e.,
SPY on you.

The employee told us he thought  it was reasonable for executives to make ten times that of a meter reader, but a hundred times his salary or more?  He said he felt that was unjust.

This man, we believe, expressed a sense of business ethics which is sorely lacking in the corporate world.  Surely there are many others like him.”

So today on Labor Day, let us appreciate the linemen and other employees of utility companies, the ones who DO care about your safety, who DO still have a sense of corporate ethics, and simply want to serve the community.  The ones hoping that they will be able to keep their jobs and continue to provide for their families.   Let’s join with them- with truth and justice on our side- and demand that we close this ugly chapter in our history- where utilities are forcibly blanketing a Class 2B Carcinogen throughout our communities, hurting vulnerable people.  Let’s unite with the utility workers, put a stop to this madness and make sure something like this never happens again.

12 Responses to A Labor Day Tribute to Utility Workers