SMUD: “They can really afford a lot of tin foil hats”

This audio of a meeting of the Sacramento Municipal Utility District (SMUD) did the rounds a few weeks back, but we wanted to highlight it as an example of the callous disregard of the utility industry for the medical requirements and safety of its customers.  One Participant (a director of the utility?) is heard discussing the opt out fee that is being proposed:

“I think the 166 dollars up front will convince them they can really afford a lot of tin foil hats.”  Another participant: “But they’re already wearing them.”

We here at Stop Smart Meters! felt like this was pretty filthy and inhumane way to treat people who are communicating with the utility about their health.  We contacted SMUD spokesman Chris Capra today and asked him if it was SMUD policy to ridicule its customers with disabilities.  He expressed no regret or apology and told SSM! these comments were  “made in response to those who have overreacted  (to the deployment)”  When asked whether he thought the World Health Organization (pdf) and American Association of Environmental Medicine were also overreacting, he stated that SMUD looks to the FCC for guidance on health-related matters.  This, despite the fact that as we reported in March, the FCC does not have any medical professionals on staff.

The utility seems to be trying to make it look like they are being fair and sensitive to customers— while at the same time reducing the number of people who will opt out. This is yet more evidence that ‘opt out’ fees being charged by utilities are punitive in nature instead of actually reflecting any real cost incurred by a customer’s choice.   These executives likely took economics in college, and are accustomed to using a demand response logic to suppress or increase demand for a particular product.  Price goes up, fewer people will choose to buy a product.  Price goes down- demand is stimulated.  Never mind that this particular product someone is being forced to pay for is something they have always had for free- a living environment where they can choose how much carcinogenic radiation they want to be exposed to.   That’s capitalism for you- charge people for what they have always had for free- pure water, exercise, even air.

What’s even more egregious is that the “opt out” being offered by SMUD is a “radio off” smart meter, a kind of meter implicated in health problems associated with the switching mode power supply common in digital meters and other electronic devices.

According to the tape, SMUD wants to “periodically” make price adjustments based on participation.   They are, however, very concerned that social media and publicity will mean more people will want to opt out of smart meters. If that happens, they don’t want to lower the cost.  So they want to set it up so that the cost can go up (only up) if fewer people actually opt out–but not go down.  If for example a lot of people actually (via social media) were to get on board–then that would be “damaging to the project.”  Of course the fact that no one was “offered the meters” as stipulated in the 2005 Federal Energy Act is conveniently left out of the discussion.

Their goal is clearly to kill the opt out. One of the SMUD staff even says–if it gets to a low enough number such as 90 people, then they will be moved to a smart meter:

“The remaining 90 customers must move to a smart meter or tell them they will increase it by quite a bit.”

“(We’ve got to be) making sure we’re not making it too easy for customer to go along with the program–but not be responsive to customers who think. . .. this is a right balance $124.00 and $54.00 a month [!] is going to be very expensive for the vast majority of our customers. . .We’re willing to work with you.  More than that money would look so cost prohibitive, would look like we’re not going to give them an option.”

They discuss the letter that they plan to send out to customers.  They want as much as possible to keep this “under the radar”(one actually used that phrase).  So they will only send the information about the opt out to people already on the list. They say they will not advertise it on their web site.

They discuss how to handle this with the press/Sacramento Bee.  One Participant:

“Smud adopts opt Out–working to have a neutral story–giving the messaging point we would discuss today.  We would not communicate or discuss with the press the nuances of different rate options.  We would simply be very direct and focused. This is our opt out policy (on lots of complicated issues been able to mitigate and neutralize the press. . .) Story would pretty much be a non story very quickly.”

The trapped discussion has to do with the fact that they are making this such a narrow opt out that someone will not be able to move to a different home if they are electrosensitive.  Lovely.

“The program has a sunset clause–opt in prior to end of year–Closed after that.”

“After 9 months no new enrollments” [This is so the social media doesn’t get onto it. So they are making it available in a very small window period.]

What to do with recalcitrant customers who don’t want them to come onto their property or refuse (they will be using a lap top computer and an optical reader to read the radio off smart meter option.) (Turn off Power or call the Sheriff)

“under the radar.” “the less that’s said about this (opt out  option) the better”

“We don’t want to call all customers about the opt out (option) But only those who have already objected.  We are not going to tell everybody”………”Our tactic is to target only the 2300 customers that refused. We want very limited communication and nothing on our (Smud.org) web site.”

This tape is both tragic and enlightening.  Because SMUD is a public agency, their meetings are recorded and open to the public.  If this is what utility directors are saying in public, we can only imagine what private utility corporations are saying behind closed doors.

Thanks to Stop Smart Meters! Irvine for much of the transcription- see: http://stopsmartmetersirvine.com/2012/03/20/smud-audio-tape-the-makings-of-a-sham-smart-meter-opt-out-ditto-burbank-glendale/

And their page about the Burbank Smart Meter “Opt out”: 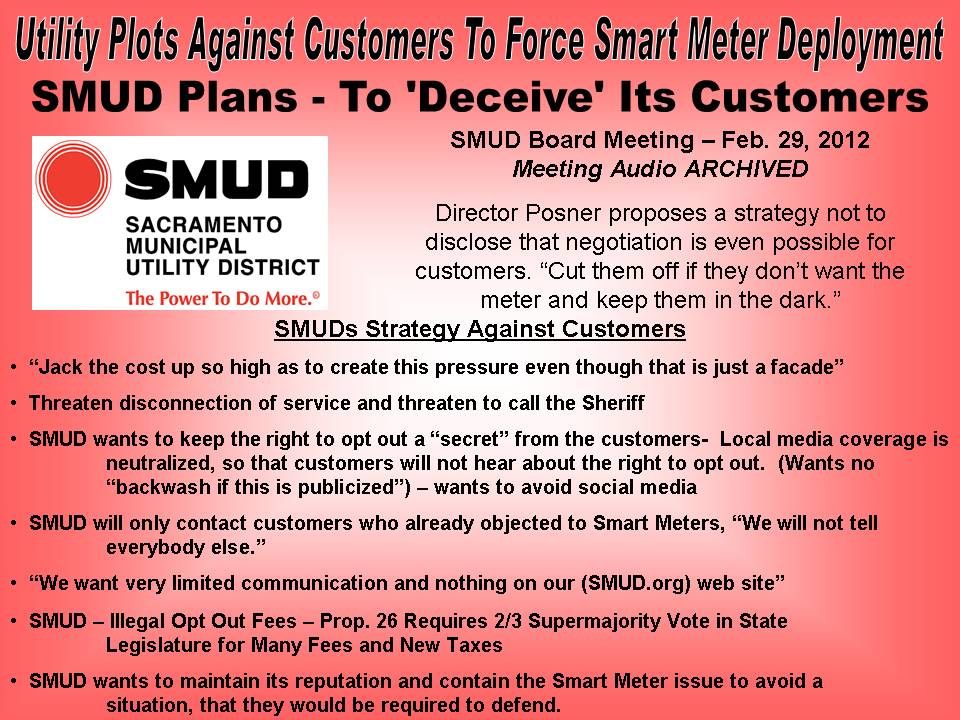 6 Responses to SMUD: “They can really afford a lot of tin foil hats”