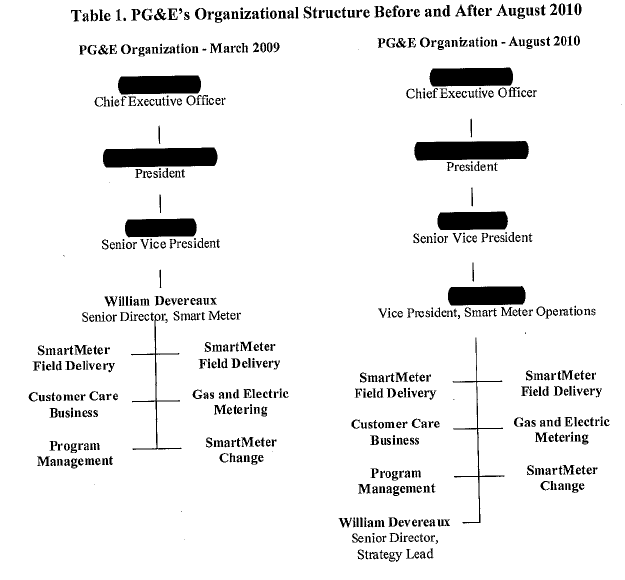 SAN FRANCISCO – While public anger continues to simmer over the imposition of illegal[1] and extortionate smart meter ‘opt out’ fees that continue to be hotly disputed at the California Public Utilities Commission, a CPUC Administrative Law Judge is set to decide this Friday July 13th how to respond to a Pacific Gas and Electric (PG&E) protective order attempting to seal details of how the head of PG&E’s entire SmartMeter program- along with the top management of PG&E- infiltrated and spied on health advocacy groups opposed to the new meters nearly two years ago.

In the Autumn of 2010, Pacific Gas and Electric Company, the largest utility in the country, was rolling out the first major U.S. smart meter deployment in California, and facing a tsunami of public opposition.  Responding to widespread reports of health issues following installation, overcharging, and alarm about privacy violations, local governments were scrambling to pass laws prohibiting smart meters[2], and protest groups were successfully blockading installation yards in Sonoma and Santa Cruz Counties. It appeared that what was going on in California might be putting the utility industry’s entire “smart grid” plans at risk (and by many accounts- it is).  Executives responsible for the program were under an incredible amount of pressure to derail growing protests, cover up flaws in the project and prevent the facts about cheap, untested meters, electrical fires, health damage, privacy violations, and inaccurate billing- from spreading, putting at risk billions of profits to utility shareholders.

Instead of working with community groups to identify and correct hazards, top PG&E executives decided to spy on their “opponents.” William Devereaux was the Senior Director of PG&E’s smart meter program and the public face of Smart Meters in California between October 2009 and November 2010.  He appeared at many community and local government meetings throughout PG&E’s service territory, vouching for the safety and benefits of PG&E’s smart meters.   According to the CPUC’s Investigation on the Commission’s Own Motion into the Operations and Practices of Pacific Gas and Electric Company regarding Anti-Smart Meter Consumer Groups[3], Devereaux posed as Ralph Florea, an anti-smart meter protester.  He began to spy on anti-smart meter groups in September 2010, forwarding private e-mails from activists and suggesting to other PG&E executives that they sign up for the private discussion lists as activists also.  Finally, on Nov. 4th, 2010 Devereaux’s deceit was discovered when he tried to join a state-wide anti-smart meter coalition e-mail group, and his e-mail program betrayed his true identity.   At the time, Devereaux was attempting to access a private forum dedicated to discussing strategy surrounding the EMF Safety Network’s legal proceeding- opposing SmartMeters on public health grounds at the CPUC, a position that has been backed up by physicians groups such as the American Academy of Environmental Medicine[4].  Devereaux admitted to the spying, resigned from his position at PG&E, and now works for Oracle as VP of Industry Strategy, where spying on the customers is apparently considered a career boost.

PG&E also hired the Edelman Group- a corporate security firm- to spy on activists including Josh Hart Director of Stop Smart Meters!  PG&E employees and contractors referred to these community groups in e-mails as “slackers” and “insurgents.”  Another said, “This is fun.  No one said espionage in the job description.”  After a smart meter installation yard was shut down by mass protests in Santa Cruz County for more than a year after PG&E shied away from ordering arrests, one executive comments:

“no coffee and donuts.” (apparently police and arrests) “We will give them the platform they are looking for if we do that.”

The last thing that PG&E wanted was more press coverage to be given to anti-smart meter protesters, because of the evidence they possess that smart meters pose an urgent health and safety hazard.  Ironically, that’s exactly what PG&E has handed them by infiltrating their groups.

Many of the executives who were found complicit in the spying continue to occupy top management positions within PG&E, a fact the company is seeking to suppress with its protection order.  PG&E’s lawyers are arguing that the safety of the executives will be put at risk if they are publicly identified in the CPUC report.  The company’s motion for protection order states:

“Throughout the roll-out of PG&E’s SmartMeter™ program, PG&E’s employees, contractors and some customers have been subjected to escalating threats and particular threatened or actual acts of violence by anti-SmartMeter™ protestors….Based on…the history of hostility and risk of harm, the public interest in the safety of PG&E employees outweighs the public interest that would be served by public disclosure of individual names.”

No evidence to back up these claims was provided by PG&E or their lawyers.  In response, Joshua Hart, Director of Stop Smart Meters! stated: “PG&E is attempting to distract from the illegal and deceitful acts of its top executives, people in public positions who are relied upon to provide safe and reliable utility service. The only violence has been carried out by PG&E and other utilities, who have threatened, coerced, lied, trespassed, and assaulted the residents of this state with unwanted, invasive and badly designed technology.  PG&E’s executives have more to fear from the smart meter on the side of their home than any peaceful protestor. Though we hear that many PG&E employees are in fact opting to keep their analog meters- for free.  An apparent company perk.”

Privacy and civil liberties advocates are watching this case and asking if we can’t trust the utility industry not to read our e-mails and spy on us, how can we trust them not to share details of our private lives that they acquire from the smart meter?”

Consumer groups and those opposed to smart meters say they will be watching carefully to see whether the CPUC releases full, unredacted copies of e-mails showing misconduct, particularly those that reveal how CPUC staff were involved with the spying, what they knew and when. To date, only heavily redacted documents have been released to the public by the utility and the regulatory agency.  The documents did include private e-mails that PG&E obtained through their spying, further angering the victims of the infiltration.

A hearing at the CPUC is scheduled for this Friday, July 13th 2012 at 1:30pm. ALJ Vieth will decide whether to approve PG&E’s “protection order” sealing the executives’ identities and details of the spying activities. California Public Utilities Commission 505 Van Ness Ave. San Francisco  The Public and Press are free to attend.  Following the hearing, representatives of the anti-smart meter groups which were affected by PG&E’s infiltration will make a statement to the press.

Update July 14th: At the hearing yesterday, a documentary filmmaker as well as PBS Newshour were denied the right to film the proceedings.  Judge Vieth pressured PG&E’s lawyers to withdraw their redaction requests and the name of Greg Kiraly, Devereaux’s former boss, was made public.  Kiraly knew about the spying and appears to have been directly involved.  No wonder he looked pale when we had lunch with him a couple of months after the scandal broke in the news!  Stop Smart Meters! demands that Kiraly, and all executives involved in this deceit, resign immediately.  Judge Vieth indicated that she and Commissioner Florio will rule on PG&E’s protective order in writing, shortly.  We will report that decision on this website as soon as it is announced, and continue to cover these hearings as they continue into the fall.

New evidence of PG&E’s wrongdoing is sure to surface.

PG&E’s Lying and Spying May Cost Them