Bioinitiative Report 2012: “The Status Quo is Not Acceptable” 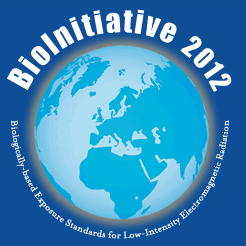 (Via EMF Safety Network) A new updated BioInitiative 2012 Report  says that evidence for risks to health has substantially increased since 2007 from electromagnetic fields (EMF) and wireless technologies/radiofrequency radiation (RFR).  The report reviews over 1800 new scientific studies and includes 29 independent science and medical experts from around the world.  Cell phone users, parents-to-be, young children and pregnant women are at particular risk.

Lennart Hardell, MD at Orebro University, Sweden says, “There is a consistent pattern of increased risk for glioma (a malignant brain tumor) and acoustic neuroma with use of mobile and cordless phones.” He further states:

“Epidemiological evidence shows that radiofrequency should be classified as a human carcinogen. The existing FCC/IEEE and ICNIRP public safety limits and reference levels are not adequate to protect public health.”

A dozen new studies link cell phone radiation to sperm damage. Even a cell phone in the pocket or on a belt may harm sperm DNA, result in misshapen sperm, and impair fertility in men. Laptop computers with wireless internet connections can damage DNA in sperm.

Based on strong evidence for vulnerable biology in autism, EMF/RFR can plausibly increase autism risk and symptoms. ” While we aggressively investigate the links between autism disorders and wireless technologies, we should minimize wireless and EMF exposures for people with autism disorders, children of all ages, people planning a baby, and during pregnancy,” says Martha Herbert, MD, PhD.

Wireless devices such as phones and laptops used by pregnant women may alter brain development of the fetus. This has been linked in both animal and human studies to hyperactivity, learning and behavior problems.

There is more evidence than we need

“The last five years worth of new scientific studies tell us the situation is much worse than in 2007 and yet people around the world have so much more daily exposure than even five years ago. Exposures are linked to a variety of adverse health outcomes that may have significant public health consequences.” (Editor’s notes)

“There is now much more evidence of risks to health affecting billions of people world-wide. The status quo is not acceptable in light of the evidence for harm.” David O. Carpenter, MD, co-editor Bioinitiative 2012 Report.

A reduction from the BioInitiative 2007 recommendation of 0.1 uW/cm2 for cumulative outdoor pulsed RFR down to something three orders of magnitude lower is justified in 2012 on a public health basis. A precautionary action level of 0.0003 uW/cm2 to 0.0006 uW/cm2 is suggested.

Applying a ten-fold reduction to the ‘effects level’ reported in short-term studies or studies on adults is intended to compensate for the lack of long-term exposure in a particular study, or to adjust for using adult studies in considering children as a sensitive subpopulation.

We hold their future in our hands

Acknowledgements for the report go to the “many independent scientists, researchers and experts who have labored, some for decades – many of whom are no longer with us – to bring this body of science into the public arena.”

Cindy Sage, Co-Editor of the report extends gratitude to her husband and family and “to Avery, Drake, Ford, Jenner, Luke, Solei, and all the children whose trusting faces remind us that we hold their future in our hands.”

2 Responses to Bioinitiative Report 2012: “The Status Quo is Not Acceptable”