PSREC: “Go Live in the Forest” 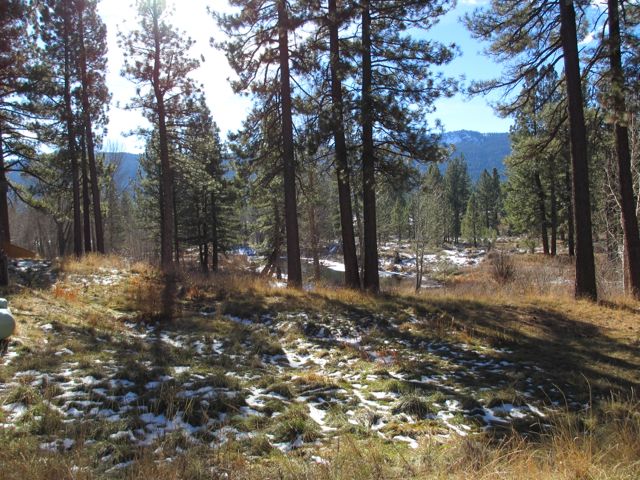 Over the last several months, we have had numerous conversations with PSREC.   We have given them dozens of peer-reviewed scientific journal articles showing harm from wireless technology at levels far below what the FCC allows.  We lent them a copy of Take Back Your Power.  We have submitted a letter from my physician letting them know that RF exposure exacerbates a medical condition.  In short, we have bent over backwards to explain the harm that their “smart” meters are doing to ourselves and the community, but they just don’t seem to be able to listen.

When we moved to Plumas County last summer, we chose to move into a neighborhood because we like having others close by and we enjoy being part of a community- we didn’t want to be in the middle of nowhere.   On at least two occasions, PSREC General Manager Bob Marshall and Assistant General Manager Greg Lohn asked me, “why don’t you just go live in the forest somewhere?”

Their question has made me realize that this whole dispute is not about the analog meter, nor about the fees.  It’s not even about my electro-hyper-sensitivity.  It’s about the fact that we’re refusing to “just go live in the forest,” and be quiet about the health problems that smart meters and other wireless technology are causing.

This is a clear threat to not only PSREC’s smart metering agenda, but the whole government/ industry dogma that says wireless is safe.

We’re refusing to obey- to go away and be quiet and sit in the back of the bus.   And Bob Marshall and PSREC hate us for it.  Their disconnection of our electricity has only made us more steadfast in our refusal to pay these extortionate fees.  We’ll survive off the grid if we have to.

In the paper this week, Mr. Marshall is quoted as saying “we hate turning off people’s power, especially in winter.”  I actually think he quite enjoyed giving the order to cut the lines.  It’s what bullies love to do- pick on those most vulnerable.   He continues, “we have a short fuse about being denied access to our meters, however.”    Well, he definitely has a short fuse.  But since we have never denied them access to their meters for reading or maintenance purposes, he must be talking about someone else.   Maybe he means that we did not allow them to install a device that they have written documentation is medically harmful to me.  I can see how that might infuriate him.

To make matters worse, on Tuesday we caught PSREC Member and Energy Services Manager Corby Gardner- likely under direction from Mr. Marshall- discussing our account with a total stranger and providing false information to make us look bad.

Isn’t it pretty clear by now that these fees, and the lies PSREC is spreading about us, are intended to be payback for our awareness raising activities in the County?  Why else would we be charged a fee when hundreds of other PSREC customers are self-reading their analog meters at no extra charge?

If anything, this incident should make PSREC customers (and all of us) wary of that “smart” meter on the side of their homes.  If PSREC is willing to go to such lengths to silence and coerce a community health advocate raising safety problems with their meters, what are they trying so desperately to hide?

We’re not willing to obey the utility industry and just “go live in the forest.”  We don’t believe banishment from society should be an inevitable outcome of being injured by smart meter radiation.  Call us crazy but we love our community.

Public Officials Address Allegations Against Them

And more supportive local letters to the editor- thank you! 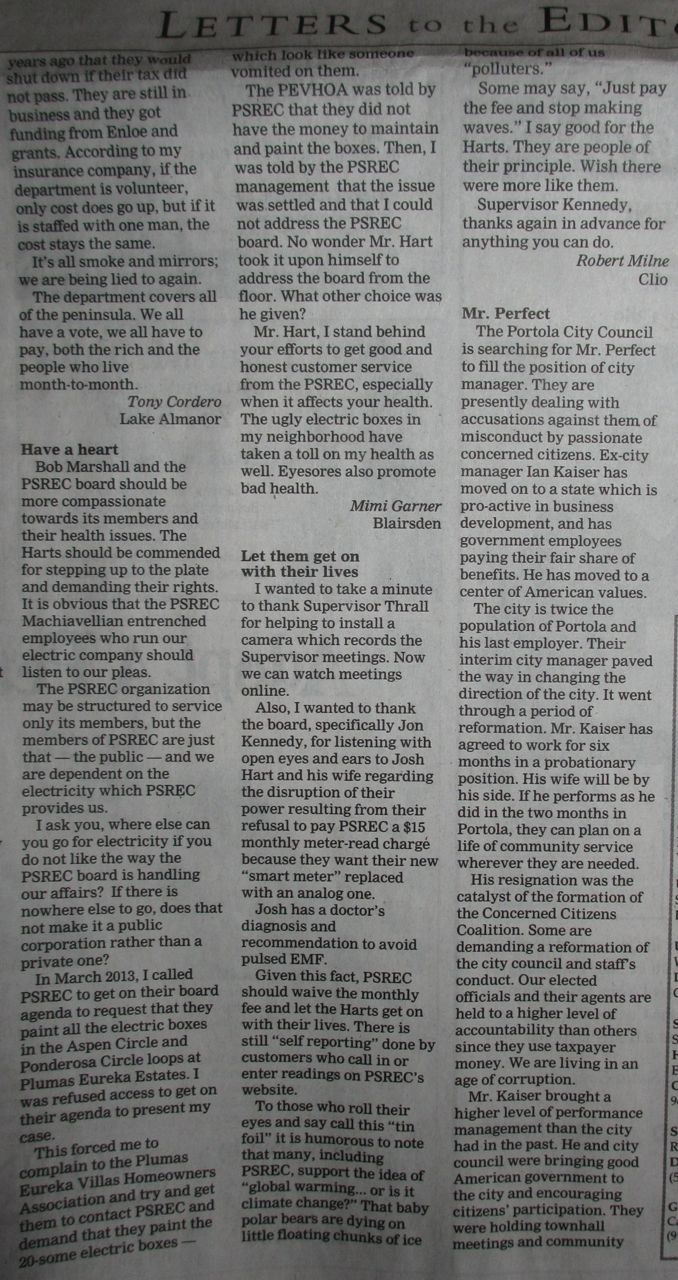 6 Responses to PSREC: “Go Live in the Forest”