PSREC Confused About The Law (Again) 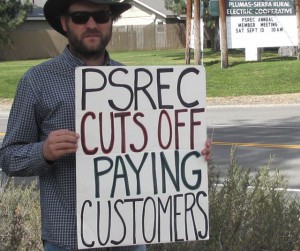 SSM! Founder Josh Hart went to the local rural electric “cooperative” to speak to other members about how PSREC has singled his family out for disconnection and retribution.

While Reno, NV Fire Chief Tom Garrison was holding a press conference on Saturday about the series of fires likely caused by “smart” meters that have led to at least one death, an hour’s drive to the northwest, Plumas Sierra Rural Electric “Co-op” (PSREC) were desperately attempting to quash any discussion of the safety problems with their own smart meters.

PSREC cut off our electricity on Feb. 19th for refusing to pay  smart meter “opt out fees.”  We thought that was rather rude.  And we didn’t think much of the intimidation tactics, coercion, yelling or lying that followed it.  But sadly it is what we have come to expect from the electric utility industry in 2014.  On Saturday, rather than ensuring the safety of their grid, it seemed that PSREC’s staff were far busier monitoring and attempting to suppress our demonstration, filming us and walkie-talkie-ing with each other.

Though PSREC is still sending us monthly member bills for “opt out” charges we never agreed to, and which other members with analogs are not being billed for, they refused entry to their annual member meeting, stripping me of membership and the right to vote in the board election without explanation.  They told me if I attempted to attend the meeting, I would be arrested for trespassing on their property. So much for democracy!

Not in the mood for a visit to the County jail, I went back to the public highway and held a sign and spoke to passersby in front of their HQ.   But that wasn’t good enough for PSREC.  They had already ‘dismembered‘ me- now they wanted me gone.

While they summoned every law enforcement resource within a hundred square miles, I peacefully demonstrated and distributed our brochures to members attending the Annual Meeting and Luncheon.  Most people were supportive and had heard about our mistreatment by the utility.

I asked the PSREC employees “guarding” me whether they were requiring an extra fee to use the disabled parking in front of their offices: “That’s your thing, right?  Charging more to people with medical conditions?”  I advised them if they wanted to suppress freedom of speech more effectively that they might “want to buy up the whole county” because that type of thing generally isn’t allowed on public property. 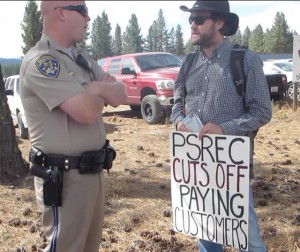 PSREC tried (in vain) to get us removed from the highway in front of their HQ by calling the CHP and Sheriff’s Dept.

A California Highway Patrol Officer showed up and suggested that I should “move down the highway a little” to get out of the way.  Finally common sense and the law prevailed, and a female officer from the Plumas County Sheriff’s Dept. showed up and confirmed I had every right to be there and to express my point of view, and PSREC could do nothing about it.   We chatted for several minutes about the hazards of smart meters, and how PSREC had mistreated our family, while the utility’s staff glared. 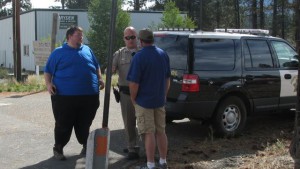 In spite of PSREC’s best efforts to undermine freedom of speech and suppress the truth about their unlawful abuse of customers and their hazardous smart meters, the First Amendment remains the law of the land.

Though a local newspaper reporter interviewed me and took my photo, not a word was mentioned in the paper this week.  Smoky the Bear’s appearance at the meeting was apparently more worthy of space in the local rag than people being killed  by smart meter fires in Reno, or locals who refuse to pay to avoid the deadly meters getting their power cut off and harassed with threats of arrest.

Fred Nelson, one of the PSREC board members walked by on the way to the meeting and I told him we would like our electricity turned back on before winter.  He glanced back with a smirk, and said, “you know the deal.”

We do know the deal, Fred- and the deal is rotten. 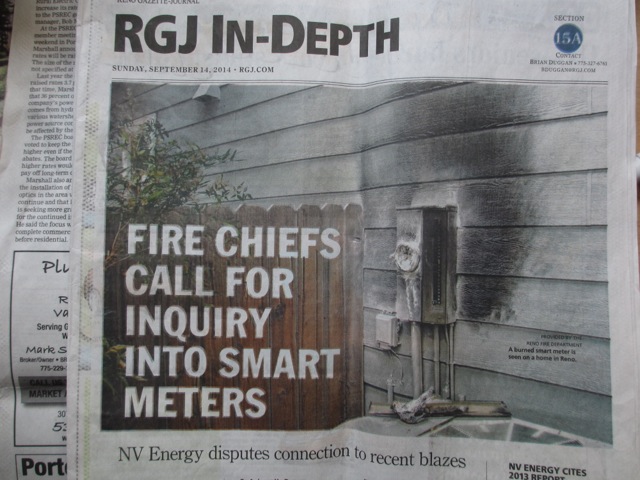 While Reno’s paper focused on the hazards to life and property posed by smart meters….. 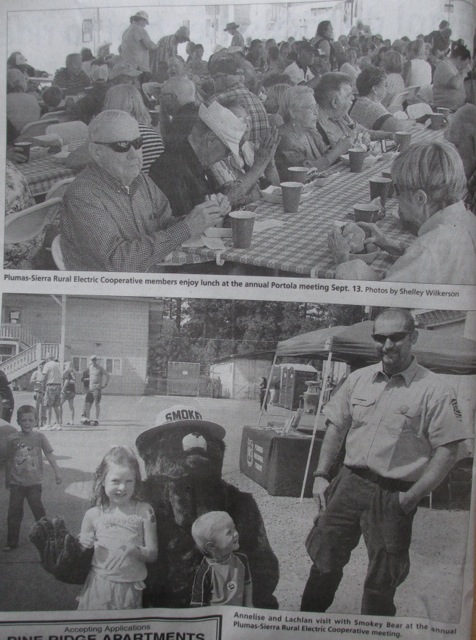 ….50 miles away, the local Portola Reporter was more interested in what people were eating, as well as a man dressed in a Smoky the Bear suit.

7 Responses to PSREC Confused About The Law (Again)