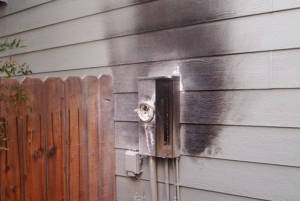 It was reported by the Reno Gazette over the weekend that a 61 year old Reno woman and her two animals died from a fire apparently caused by a Nevada Energy smart meter on her home in late July. Our deepest condolences to her family and her friends and neighbors, and we declare our mutual outrage that this issue has been ‘left to smoulder’ for years by corrupt state and federal officials, even as people lose their lives.

According to Reno Fire Chief Tom Garrison, there have been more than dozen incidents in the Reno/ Sparks area including one that burned a man’s face.

The fires in Reno started in Sensus meters, the brand that has been subject to safety recalls in Saskatchewan, Oregon, and Florida.  It’s also the company who fired whistleblower Don Baker, a former employee who tried to bring this hazard to their attention).  But it’s not just Sensus meters.  Since the beginning, there have been problems including fires and explosions with GE, Landis & Gyr, Itron, and others.

Apparently, having untrained workers install non-UL approved, flammable plastic meters stuffed with untested transmitters and electronics in them, carrying the full electrical load of a building, and left out in the elements may not have been such a great idea.  Who knew?  What we do know is that Larry Nikkel and Michelle Sherman (and how many others?) would be alive today if regulators had done their job and utilities obeyed the law.

A smart meter fire can be particularly dangerous according to Reno Fire Chief Garrison, because:

“they start on the outside of the house, won’t be picked up by indoor smoke detectors and can escape immediate notice.

‘It can burn a long time and enter the attic or the walls,”‘Garrison said. ‘The occupants inside may not even be aware the house is on fire. This is very alarming to me.’“

NV Energy is the same company who came to a woman’s house with armed men and disconnected her electricity for choosing a safe analog meter.   StopSmartMeters.Org has also been the target of utility abuse.  Here we are in one of the worst droughts in the West’s history, living in a dry forest, having been cut off by PSREC the local electric company because we refused to pay a fee for a safe, non-combusting analog meter.

In other tragic and preventable news, our colleagues over at Stop Smart Meters! Massachusetts have issued the below press release, renewing their calls for a full investigation into the costly, ineffective, and hazardous smart meter program in that state after last month’s death of a 6 year old girl in New York state from Carbon Monoxide poisoning after National Grid cut the family’s electricity off. 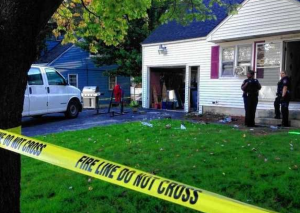 The death of a 6 year-old girl in a NY home where National Grid cut off electricity for non-payment has amplified human rights and environmental activist group Stop Smart Meters Massachusetts’ request for an investigation into the expense to ratepayers of the Department of Public Utilities smart meter mandate. The group has also called for an audit of the controversial $48M, 15,000 meter Worcester pilot program, which is 5 times larger and far more expensive than the Green Communities Act mandate.

Carbon monoxide poisoning is suspected in the NY death due to the use of an indoor propane heater. The Chicago area Advanced Metering Infrastructure Health Impact Assessment, conducted in partnership between the National Center for Medical Legal Partnership at Boston Medical Center, and Citizens Utility Board noted that customers deprived of electricity often turn to unsafe alternatives, endangering health and safety.

Wireless smart meters enable two-way communication between the utility and the home. 111 municipalities in Quebec have called for a moratorium and/or free opt out. Germany has rejected smart meter deployment. In the UK, the Committee of Public Accounts issued a report Sept. 9 casting doubt over the validity of the smart meter rollout, raising concerns over the cost-benefit to consumers and the ability of the energy market to keep costs down.  Nations including Italy, the site of the Vatican leukemia lawsuit, opted for safer, faster; more secure hard-wired technology. Italy is not collecting private usage data from customers. Lakeland, Florida; Saskatchewan, Canada; Pennsylvania, and Oregon have removed thousands of smart meters due to fire hazards.

The Worcester pilot program, which included 242 microwave antennas, has been delayed due to contentious zoning battles regarding placement of
towers in residential neighborhoods. Despite the fact that the pilot program has not proven smart meter effectiveness, the DPU has already mandated the technology for MA investor-owned utilities, estimated at a cost of over $7B to ratepayers.

Tim Knauss of Syracuse.com reported that in NY, “For the past decade, in good times and bad, National Grid has reported more than 200,000 customers a month – roughly one in seven – who are at least two months behind on their bills. Each year since 2006, National Grid has terminated between 49,000 and 61,000 residential accounts for nonpayment in its Upstate territory, which extends from Albany to Buffalo. For some customers, there is “a permanent level of unaffordability built into the rates,” said William Yates, a senior financial analyst at Public Utility Law Project.

Informed activists caution that the costly technology is untested, has not been monitored for environmental and health impacts, and relies on FCC guidelines that have not been reviewed since 1996. Concerns are mounting that consumers will be forced to pay for the technology twice, once for the initial installation, and then for the replacement cost once the shortcomings of the system are readily apparent.

The Department of Public Utilities relied on the testimony of tobacco scientist Peter Valberg from the product defense firm Gradient, while reports such as the Seletun Scientific Statement recognize biological harm occurring at radio frequency exposure levels far below US exposure guidelines, which have never been tested for children, pregnant women, the infirm, medically vulnerable, or elderly.

The Berkshire-Litchfield Environmental Council, which provided testimony in opposition to smart meters for MA DPU docket 12-76 stated, “The smart grid
is increasingly understood as an over engineered, ill-advised, financial
boondoggle at taxpayer expense, capable of endangering the security of the
entire national grid, violating constitutional privacy protections and
endangering public health. In addition, the smart grid/metering has not been found to save energy when all the new variables in the system are factored in. Plus, time-of-use pricing is largely punitive to those who can least afford it. Time-of-use pricing is fundamentally a Wall Street model designed to maintain shareholder profits as we transition to more energy efficient models that will reduce demand.”