Standing Up to the Sleaze and Rot that Kills 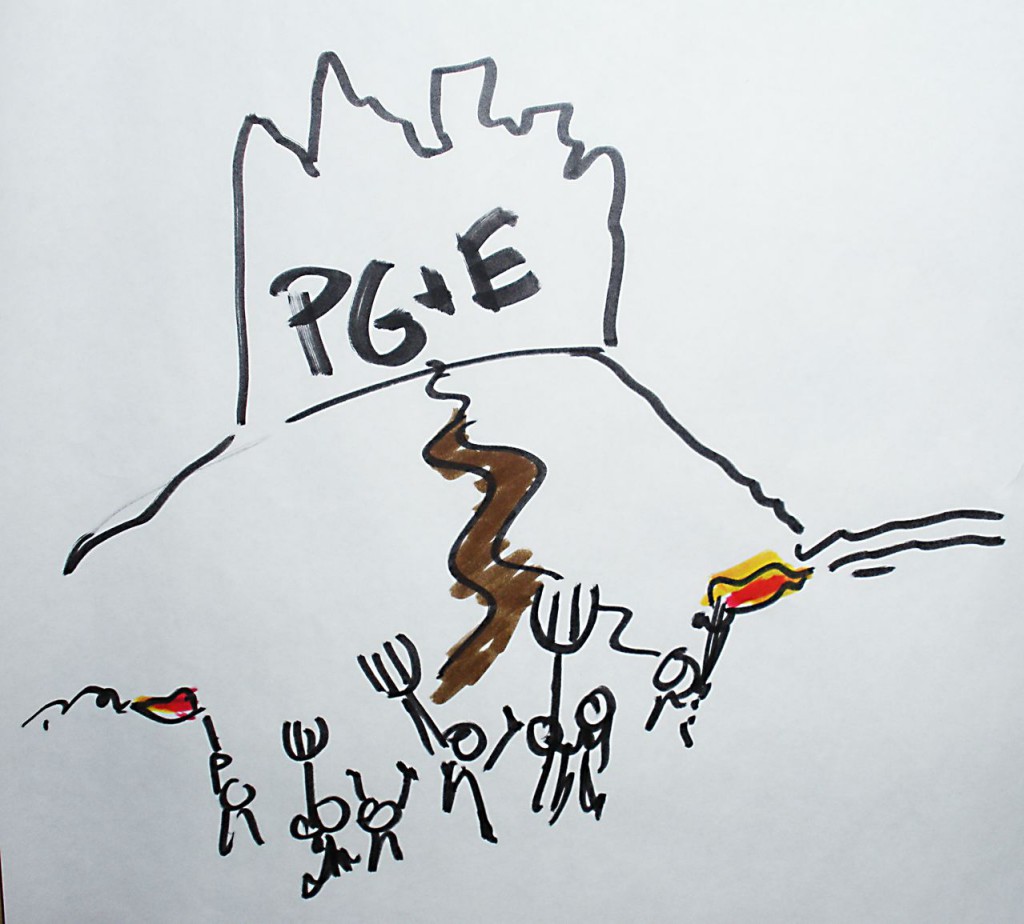 One of the anti-smart meter activists I work with recently commented that the “CPUC has lost touch with reality”.

Certainly a strong grip on reality has not been one of the CPUC’s strong suits.  A recent spot on critique from Arizona’s Warren Woodward sheds light on the intentional deception and serious departure from reality being carried out on a systematic level by state utility commissions working side by side with utility corporations.  The system of corporate power that now dominates our “regulatory” agencies has attempted to project an alternate reality that obscures harm to suit their single minded profit motive.  This system hasn’t lost touch with reality.  You can only lose something if you had it in the first place.

The CPUC’s culture has been denounced as being “sleazy” by its own employees. The head of the whole operation- at least for another few days- Mike Peevey- has been called a mob boss the way he solicits payments from utilities for favorable policies.  The CPUC’s lax to non existent regulation was directly responsible for the San Bruno pipeline explosion that killed Jacqueline Grieg (who worked for the PUC’s Division of Ratepayer Advocates to stop PG&E from gouging ratepayers) her daughter and six others.  The PUC has ignored reports from thousands of people made sick by the new meters and callously tried to stomp on the democratic rights of local governments- on this and many other issues.

People are fed up and they’re not going to take it anymore.

If we expect that the CPUC will somehow “find reality”- in response to our good arguments- that is like waiting for a murdering psychopath to realize that killing is wrong and stop their behavior.

The PUC and the inhumane system that it represents (the “corporations masquerading as government” as Josh del Sol recently posted) will not change of its own accord no matter how many letters we send.

The attack on public health and safety and the highway robbery the smart grid represents is not the result of some “misunderstanding” or “lack of information.”

All of this is intentional and it will only stop when the criminals behind the program are forced to stop.  If a PUC commissioner suddenly woke up and realized the truth and started to actively challenge the system, the system would have them removed.  No question.  Commissioners are vetted carefully for any hint of rebellion before they are appointed.   As Emma Goldman said, “if voting changed anything, they’d make it illegal.”

Activists trying (in many cases valiantly and at great personal and financial sacrifice) have seen how fruitless it is to try and get one government agency to censure another, when the stakes are as high as a trillion dollar industry driving the global economy.

And largely a waste of our time every time we defer to their authority in any way.

What are the alternatives?  Are we doomed to submit comments to be ignored at the PUC and accept the consequences of smart grid proliferation?  Spend thousands of dollars on lawsuits just to be tossed out of court by corrupt, system-loyal judges?

Watch as our friends and families and perhaps ourselves get sick and die of cancer?  As our homes burn down at 3am and the utility blames the wiring?  As we are disconnected one by one from essential services because we refuse to agree to pay not to be harmed?

What we need is a resistance movement that protects environmental health and safety by whatever means necessary.   A group of committed individuals who will stand up against state power and refuse to back down- no matter what- in the face of injustice.  Yes we need the intelligent, well-informed critiques of current policy to spread awareness and provide fodder for those willing to take the time to analyze the truth (and lies) behind these industry documents.  But intellectual debate and discussion- or even active awareness raising campaigns- are not going to win it alone.

The smart grid is violence.  Our capitalist system is a violent system that steals from the global poor and the planet itself to make the rich richer- for a limited time only.

This horrific system- one that essentially condones police murder, torture of millions of animals and people, military-backed imperialist wars for resources, fracking, clearcutting, polluting, radiating, modifying our very genetic material.  The “Smart Grid” and its network of pulsing, deadly meters has its roots in this toxic brew of coercion and control.

These are all outcomes of a worldview that thinks of the planet and all who live on it– as dead matter to be consumed and used, profit extracted and then excreted.  Thinks of humans as being supreme beings ruling over all, but then ironically destroys the life support system that keeps us and all our relatives alive.

Unless we see the fight to “stop smart meters” in the context of this larger destructive system, we have lost before we event start fighting.  Banning smart meters would be a good thing, but leaving the system in place that brought them about is dangerous.

You can hack away at the branches but unless you get the root out evil will grow again.

Let’s remember those who died who could be alive today if money were not more important than life to this system:

How many more?  Who is next?

What do you do with a murderer on the loose?  You apprehend him and lock him up for a long time so he can’t hurt anyone else.  So why aren’t we doing this to the corporate criminals responsible for these murders?  Why do people continue to vote for politicians who are not only failing to carry out these critical prosecutions, but aiding and abetting the murderers? 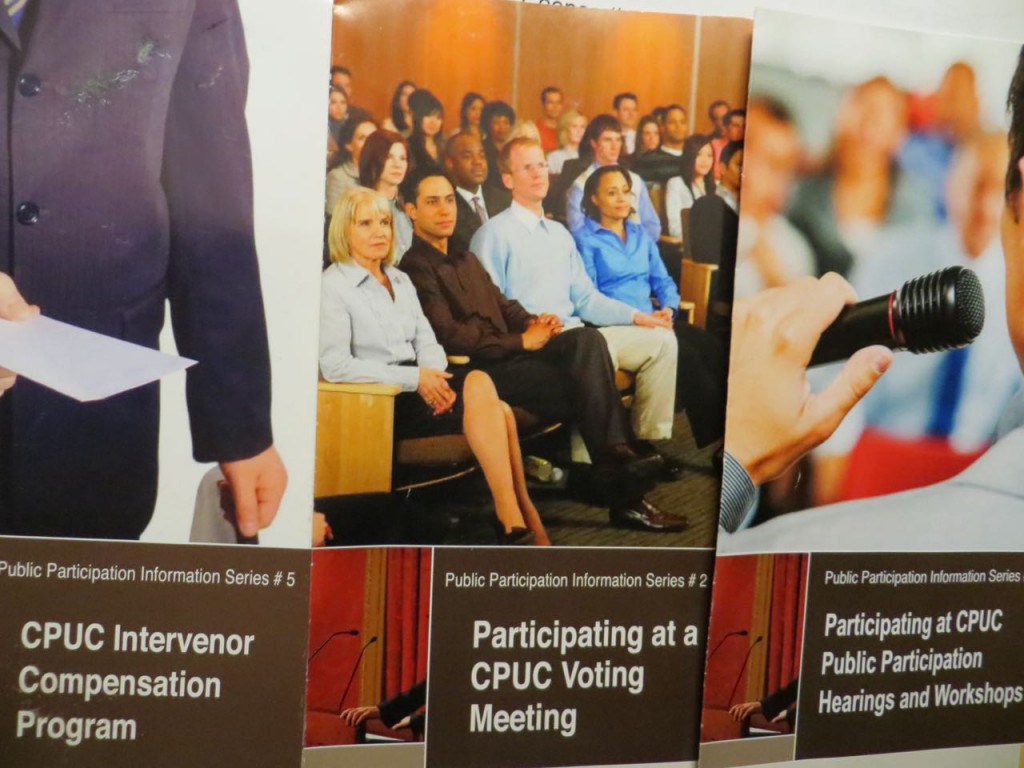 Michael Peevey, the man most responsible for all this- has one meeting left to rule over and make bad jokes.  Will we just continue to file in to the CPUC like serfs, obediently sign up to speak, wait patiently in line for our turn, and beg the psychopath to change his stripes, all the while he is sitting there with a big grin, while behind the curtain lie decomposing bodies of our friends and piles of (our) cash?

Does the fact that it’s hidden make it any less of a crime?

Deceiving ourselves with the narrative that if we just get enough people to go to the mic and talk about  their illness or the confirmed science of wireless health harm or the fires that have torn families apart or the blessed privacy that’s been lost that this will all stop of its own accord?

It’s time to take it to the next level. It’s time to be honest about the need to develop a realistic plan to actually win this thing, embodying the spirit and words of Mario Savio on Dec. 2nd 1964:

If you are interested in getting serious about grinding the gears of this cruel system to a halt, and challenging the corporate power structure, it is important to realize that you are not alone.  People are waking up all over and are hungry for ways to confront injustice.   But what does this actually mean?  Can we “take back our power” with words alone?

Words can be powerful but sometimes you need action.  Direct action and civil disobedience is at the heart of the Stop Smart Meters! movement, and has been directly responsible for forcing some of the key policy changes we have seen in California and elsewhere.

I’m personally not willing to wait around for a change that will never come, or come too late to make any difference.  Running away or deferring to a psychopath’s authority is akin to suicide and I am not willing to give up my life or my health that easily (though sadly it seems many are without even a fight).

If you are reading this, then you are already aware of how serious this problem is. Maybe you have peered down the rabbit hole and understood the degree of deceit at work here.

Smart meters are safe!  Far below FCC guidelines! Go back to sleep!  Nothing to see here!

Some of you may even be brave enough to consider action that is more radical than simply making idle requests to the institutions that caused the problem in the first place.