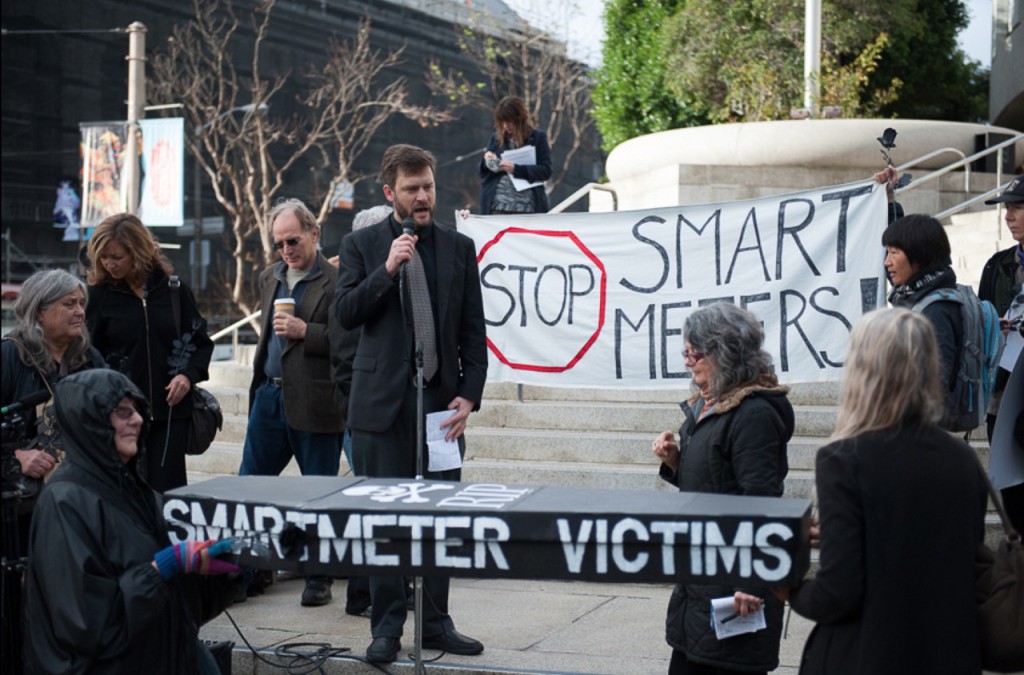 The December 18th 2014 meeting of the CPUC (a.k.a. the utility/telecommunications industry now acting as the California Public Utilities Commission) was the last for Mike Peevey- former SoCal Edison CEO and “mob boss” – a man who has driven the forced deployment of smart meters in California- and violated disability, privacy, and safety laws repeatedly to benefit his industry clients. 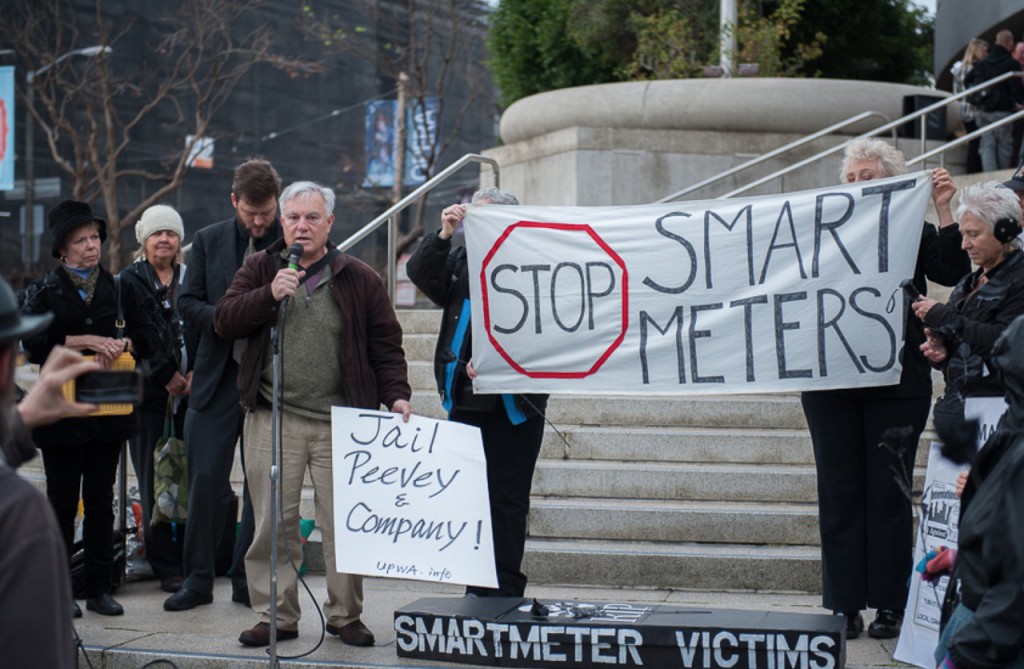 Outside the CPUC, on busy Van Ness Ave., mourners in black had gathered around a coffin representing victims of the smart grid, listening to eulogies to the lost and naming those responsible.  A press release had been issued and the media invited.  The press however turned their back on the funeral and were clustered instead around San Bruno mayor Jim Ruane and Senator Jerry Hill, their attention on PG&E’s other, more blatant, obvious, and sudden victims. 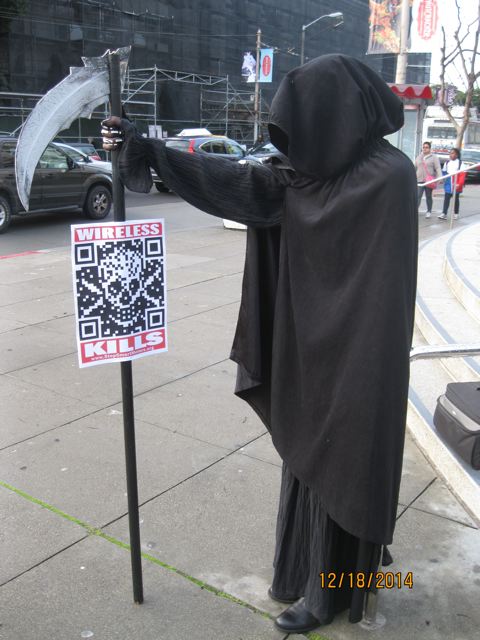 Inside, nauseated attendees suffered through an orchestrated Peevey-love-fest that droned on for 2 1/2 hours and quickly discovered that the public comment period was an opportunity for the corporate state to crow about how wonderful the man is––and how wonderful they are.

Their gushing praise an attempt to insulate him and thus themselves with their seedy entanglements from future prosecution for the deaths in San Bruno and deaths and injuries from hazardous smart meters.  After all, Michael Peevey, an early architect of the smart grid, is now facing investigation and possible prosecution by the US Attorney’s office and California’s Attorney General.

This is the same crowd who flew Peevey around the world on the utility company dime in exchange for close access and influence with the top regulator. 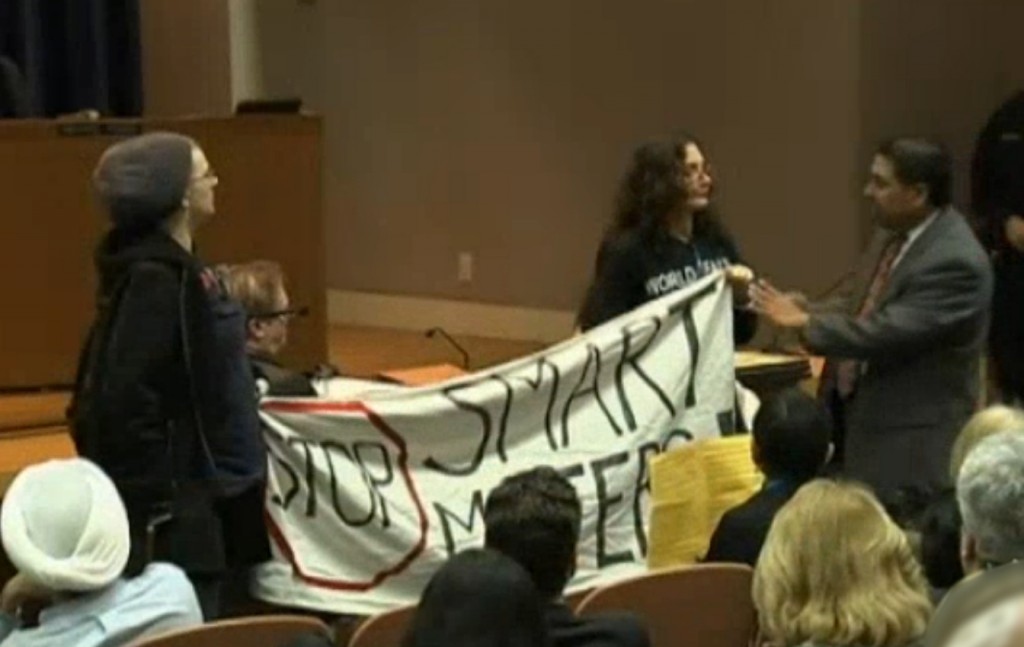 While Peevey’s praises were being sung, I was thinking about the many families that have an empty place at the table this Christmas because of his lax to non-existent regulatory policies.  Deaths from fire resulting from second rate equipment being installed by second rate temp workers- it all could have been prevented.  How many are suffering in what used to be a home and what is now just a place to tolerate?

The endless stream of people harmed by smart meters parading to the podium in the last 5 years will certainly cloud Peevey’s legacy.  Yet, as usual the public uprising was only lightly touched upon by the media.  In fact, as Sandi Maurer of the EMF Safety Network has pointed out, the San Jose Mercury News appears to have censored a reporter who went into some detail about the smart meter protests at the meeting, with large portions of the coverage having been removed from the original online article.

The AP ran a story that incorrectly stated there was only one person there who condemned Peevey.  In reality there were dozens.  It doesn’t make you paranoid to think that these omissions are intentional and part of a pattern.  We deserve a better press.

Representatives from state government agencies, financial beneficiaries of his policies on Wall Street, and corporate groups like EDF and NRDC crowed at the public’s podium about how compassionate to those less fortunate Peevey is, what a defender of the environment—a leader on climate change!

Returning to their reserved seats, they checked for updates on their melting-ski slope-holidays, pawing at their wireless devices as one by one, speakers went into grim detail about the misery, illness and suffering caused by exposure to wireless devices. 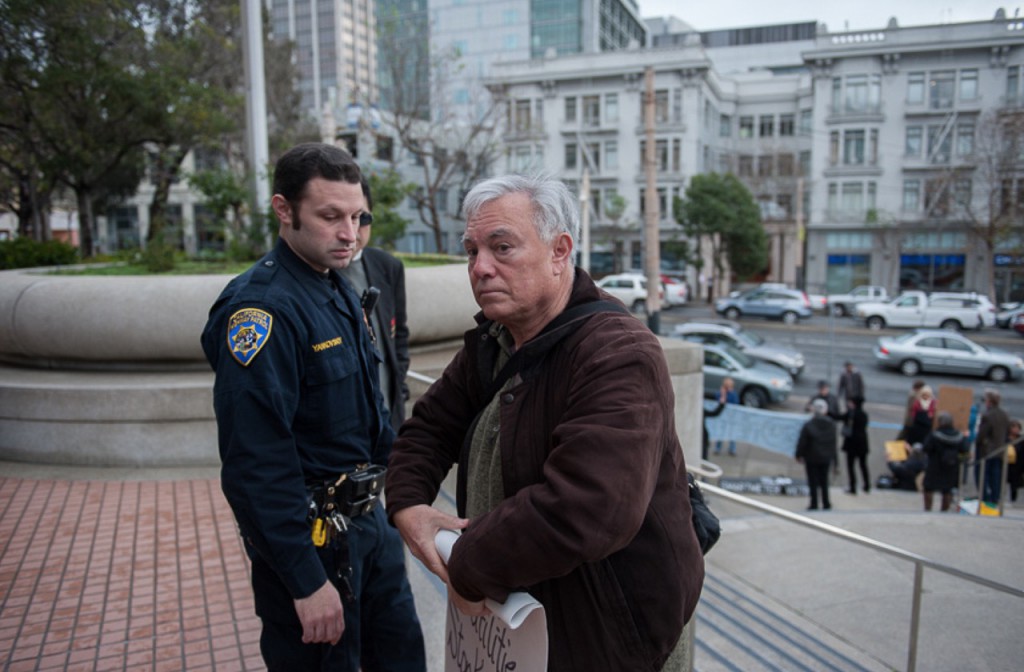 Members of the public (many of them injured by smart meters), were forced to sit through the hours-long, back-slapping-love-fest and thick electrosmog so that they might finally have a chance to address the commission (strictly timed of course). Yet should they speak over their allotted time, or bring up unacceptable subject matter they risked being escorted out of the room by one of the armed state police, standing by and ready to protect—should things get out of hand.

What a corrupt sour mess!

Pay for Protection: The Utility Scam and Growing Public Revolt

Approving smart meter extortion fees and denying ADA rights was also on the agenda that day.

In response, we carried out a coordinated public demonstration of disgust and revulsion against Peevey’s CPUC, standing up in the meeting and holding signs naming the crimes and reading aloud the names of smart meter victims – including testimonies from thousands of California residents and those who spoke at public hearings all over the state who were ignored in the smart meter “opt out” proceeding. 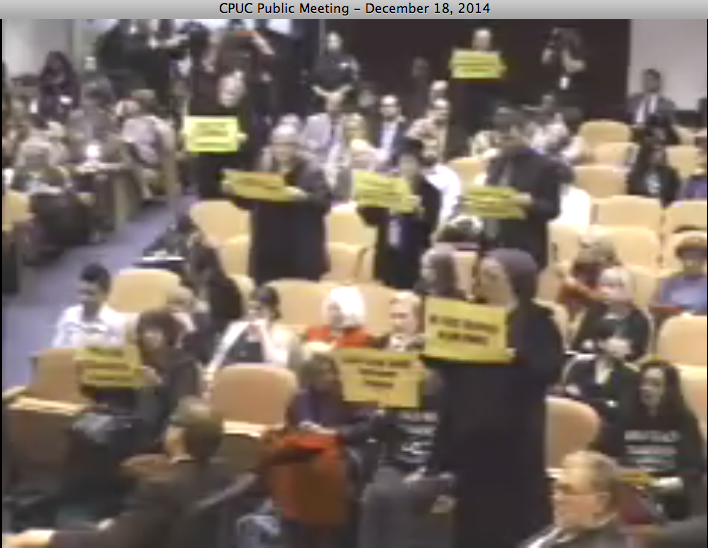 While corporate patrons of Mr. Peevey were given up to ten minutes and allowed to wax lyrical, some smart meter and corruption critics were cut off after a few seconds- even surrounded by 3 state police when one speaker suggested that Peevey “belongs in prison” (it may not be far off- he is currently being investigated by the US Attorney and state Attorney General….)

After lunch, without any debate or discussion apart from the usual platitudes, the commission approved a plan to charge every California customer of an investor owned utility who uses an analog (rather than a “smart” meter) to measure gas or electricity $75 and $10/ month ($10 and $5/ month for low income).   Those living with a bank of meters on their wall, businesses and communities as a whole would not be allowed to “opt out” at all, and even those with letters from their doctors and diagnoses of electro-hyper-sensitivity would not be permitted to retain basic utility service without paying the “opt out” charges if this decision is allowed to stand.

The commission then unanimously approved Peevey’s version of the proposed decision which added a 3 year limit to (or sunset on) individual residence opt out fees.  Questions persist about the details and rationale for this. 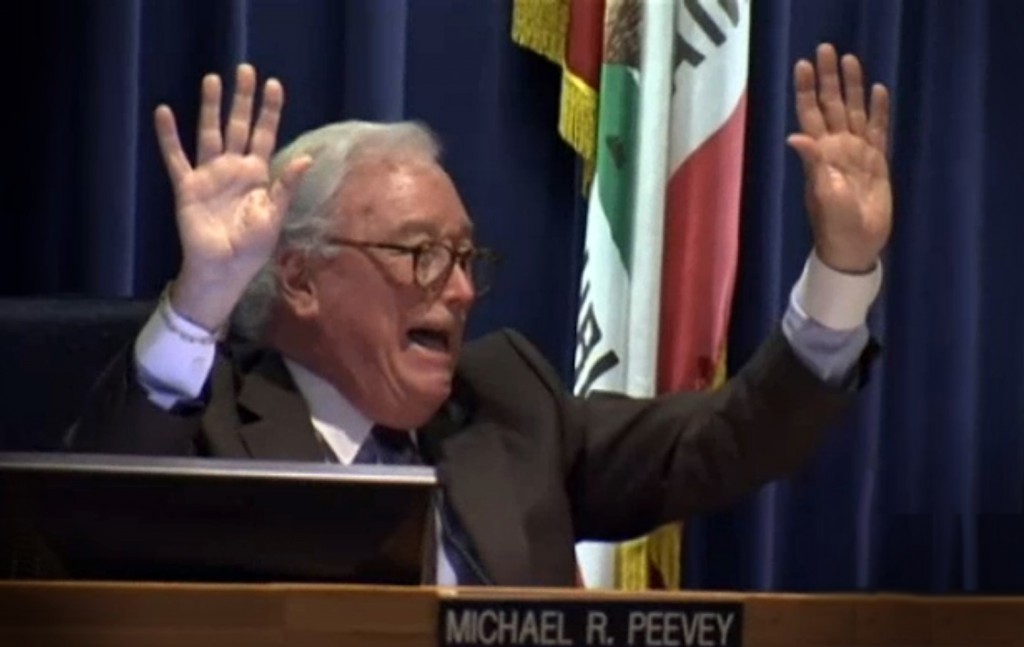 We agree with the EMF Safety Network:

This is the Stuff of Crooks

And now today- December 23rd- Gov. Jerry Brown has announced a replacement for Mike Peevey to chair the CPUC- ex SMUD Director Michael Picker- and we do mean replacement.

Happy Holidays and a rebellious new year to all of you! 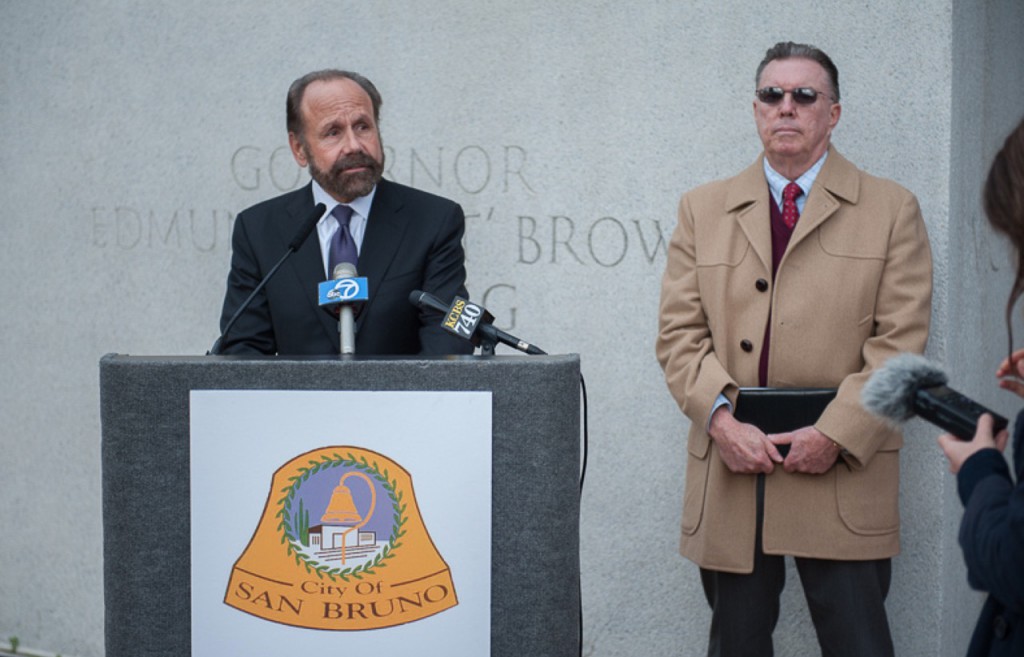 More photos from Justin Mears, whose photographs were graciously provided for this article, can be found on his website.