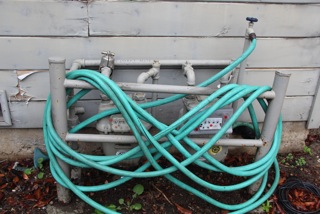 “Soft defenses” surround Mr. Hermann’s gas meter– no longer functioning since he was disconnected in December, though he had paid his bill (minus the illegal opt out charge)

On December 7th, 2016, the Southern California Gas Company disconnected the gas service of San Luis Obispo resident Ken Herrmann for unpaid “opt-out” fees related to their “advanced” metering system. This is the first instance we are aware of where an investor owned utility (IOU) in California has disconnected service solely for non-payment of opt out fees.  While thousands of PG&E, SCE, and SDG&E customers continue to deduct illegal “opt out” fees from their utility bills, and subsequently receive letters threatening imminent disconnect, so far we have not heard of anyone apart from Mr. Herrmann whose service has been disconnected due to non-payment of ‘opt out’ fees to an account in good standing.

This is an outrageous violation of our rights by shareholder-controlled corporations who enjoy monopoly control over essential services, and are using RF as a weapon to extract protection racket fees. Let’s not forget that former SCE CEO and CPUC President Michael Peevey was caught with his pants down admitting over e-mail that:

“There really are people who feel pain, etc., related to EMF,etc., and rather than have them becoming hysterical, etc., I would quietly leave them alone. Kick it around.”

Michael Peevey’s legacy is one of state-sanctioned extortion involving (what he admitted in writing) smart meters that make people “feel pain.”  Now, state “regulated” utilities are actually disconnecting service for people who:

1) refuse to accept a device that the former CPUC President admitted in writing “causes pain,” or the “etc…” of hidden damage that Peevey alludes to

Now that the energy industry controls the federal executive branch, utilities may see a green light for further bullying crackdowns. This criminal behavior must be resisted through a diversity of tactics. 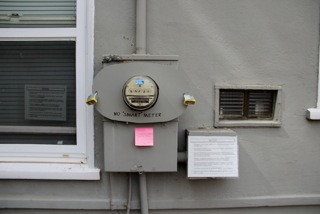 He asserts that  the collection of time-sensitive energy-use-data through the use of “smart” metering is a violation of his natural and constitutional (California – Article 1, sections 1 &13, United States – 4th Amendment) right to privacy and freedom from unreasonable search and seizure. In a formal complaint  filed with the CPUC after being disconnected, Mr. Herrmann writes that:

“as an agency of the State, the CPUC has a Constitutional restriction from acts depriving any person of life, liberty, or property, (Privacy being property) as stated in the United States Constitution – 14th Amendment…..in addition, the acquisition of private data (property) through “smart” or “advanced “ metering, and “opt-out” charges and threats of, or actual, utility disconnection meet the United States Code definition of Extortion.”

Mr. Herrmann is intent on holding out against the utility and has set up alternative heating and cooking systems to manage daily household functions (much as we did three years ago when the local utility cut us off for refusing to pay opt out fees) until justice prevails in his case.  We wish him luck and will continue to support his resistance. Just as we support the many others who are standing up for safe communities, and who continue to deduct ridiculous and insulting “opt out” fees for a system they never “opted in” to, from their monthly bills.

Community blockade in Dec. 2010 led to the withdrawal of Wellington Energy from areas of Marin and Sonoma Counties- now they are back.

Meanwhile, PG&E has threatened to deploy smart meters into two Northern California cities which outlawed the devices in 2010.  According to one report, “there could be confrontations” between residents opposed to the electronic surveillance devices in their community, and utility employees attempting to install.  Similar “confrontations” led to PG&E withdrawing its “forces” from the area in 2010. We continue to rally behind these North Bay Area communities, and call for solidarity and direct action to resist utility bullying, and support the democratic right of city and county governments to pass and enforce smart meter bans.