Pacific Power “Believes the Science it Wants to Believe” 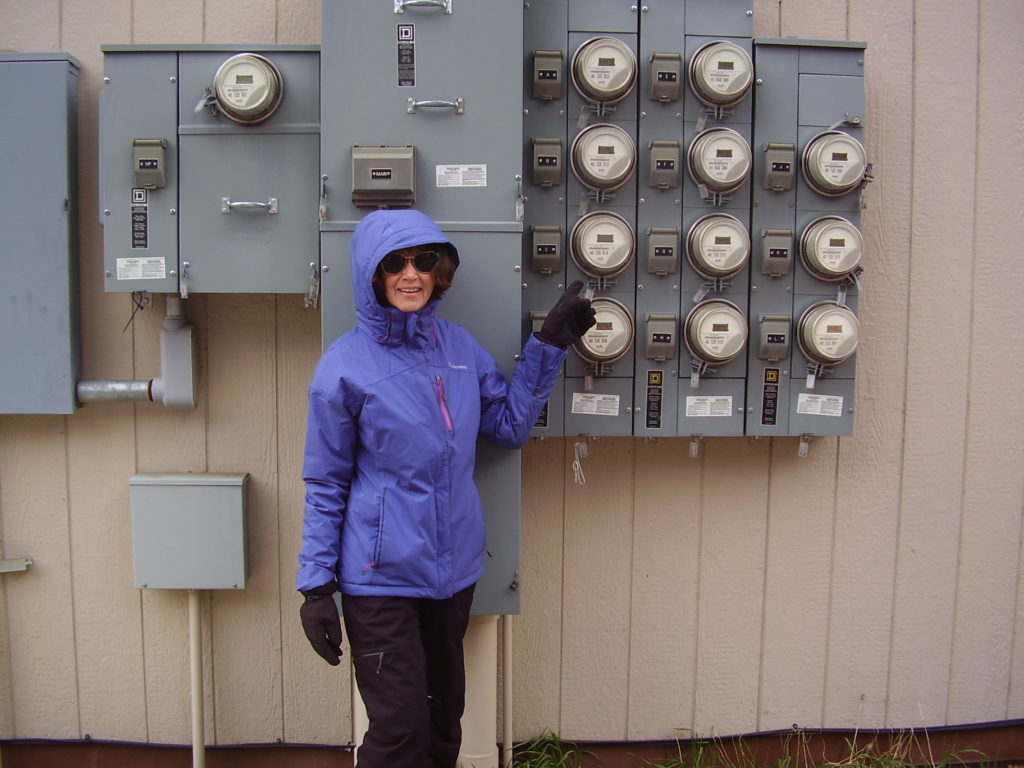 Betty Kreeger of Siskiyou County with the digital meters that PacifiCorp wants to replace with transmitting smart meters.

The following article was submitted by Betty Kreeger in Siskiyou County, California, describing a recent public meeting that raised more questions than providing answers (a familiar situation for many of you!).

On December 6th Pacific Power sent Regional Business Manager Monte Mendenhall into the senior community at Eskaton Washington Manor in Mount Shasta, for a presentation and Q&A about the new “Smart” meters the utility plans to install next year.

It turns out residents appeared to be better informed than Mr. Mendenhall, who could not answer basic technical questions, such as about the 10,000-190,000 radiofrequency (RF) pulses with which each “Smart” meter transmits data every day in some wireless mesh networks.

Mendenhall responded he’s “not into the science of this thing,” leaving one to wonder why he was chosen to present on something he knows nothing about. Since we cannot rely on Pacific Power to provide even the most rudimentary information about what it plans to unleash on our community, we consulted the actual science on this technology, and share our findings with readers here.

Of special concern in our fire-prone region, “Smart” meters have been known to start fires, which is unheard of with analog meters. In 2010 Larry Nikkel became the first person killed by a fire caused by such a meter on his Vacaville home. Power surges from trucks crashing into power poles exploded meters in Stockton in 2015, and October 2017 in Discovery Bay. “Smart” meter fires have been reported throughout the U.S., Canada, and Australia, and in recent weeks several related lawsuits were filed against PG&E in California.

The RF radiation emitted by “Smart” meters and other wireless technology has injured, disabled, and displaced many. Most have heard of the cellphone cancer studies, but RF also causes numerous other health problems, including neurological, as recently demonstrated by German scientists who measured disturbances of brain waves of drivers using wireless technology, sufficient to cause headaches, decreased concentration, and slowed reaction time.

Mendenhall claimed that several agencies conducted studies showing no harm to health from RF exposure, including the World Health Organization (WHO). But the WHO’s International Agency for Research on Cancer has in fact listed RF radiation as a possible carcinogen since 2011, and to date 220 scientists from 41 countries have signed the International EMF Scientist Appeal, submitted to the United Nations in 2015, which cites 2,000 studies that clearly demonstrate harm. But Mendenhall dismisses this information out of hand, stating “you have to believe the science you want to believe” – or trust the studies he quotes.

Other studies show environmental impacts, such as interfering with the navigation of migratory birds, bats, and insects, including bees and butterflies, and growth impediment and other injuries to trees and other plants.

On a practical level, “smart” meters are often inaccurate and there have been many reports of massive overbilling, in some cases resulting in meters being recalled. They also violate residents’ privacy with the many unnecessary details they capture, and are easily hackable and therefore an individual as well as community security risk.

Far from the energy conservation tool advertised, they waste energy as they run on batteries and require more data storage. Analogs last decades, but “Smart” meters will need to be replaced every 5-7 years, and that cost will be passed on to customers and the environment.

Automating meter readings also eliminates healthy, outdoor jobs of meter readers, as well as the regular presence of these utility professionals who are trained to recognize dangerous infrastructure malfunctions like gas leaks or loose wires.

Unlike our old reliable analog meters, these “Smart” meters endanger our homes, health, privacy, wallet, community and environment at large. Pacific Power has indicated that customers who opt out before installation of the new meters can do so for free, but afterwards intends to charge residents a fee for the privilege of protecting ourselves from harm.

Mount Shasta Neighbors (and everyone else too): Say No to “Smart” meters! You can contact Betty Kreeger at bjreeger@att.net